Fearlessness in Self-Portraiture; Once, Twice, Thrice

Why is it good to be fearless? For me, fearlessness is being prepared to step out of one's comfort zone, regardless of the occasion. This might be something physically challenging, such as skiing off something. Sometimes it is something new such as traveling somewhere different or agreeing to a new job (as I discovered recently when everyone else turned out to be far more optimistic about my ability than I am). Sometimes it is being prepared to stand-up for what you believe is right. OK, I admit it, the lesser spotted Pentaxian isn't a real cause; however being prepared to publicly poke fun at yourself is important.

For me, photographically this mean being prepared to follow my imagination and find a way of making that seemingly impossible idea possible. It also means having the courage to put the results of my photography in front of an audience.

A new (weather sealed) lens would help me make a few more of my ideas possible. As an example, there have been many occasions shooting in the rain where I have been reduced to walking around nursing the non-weather sealed lens attached to the front of my weather sealed Pentax K-10D. It would also give me a really good excuse to sing the praises of Pentax (and the Pentax community) more than I currently do. 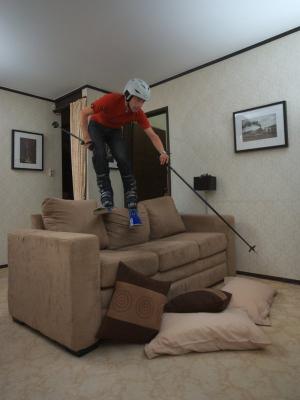 Skiing off the couch

This shot is almost as dangerous as it looks. I had a platform and step ladder setup flush with the back of the couch. Nonetheless, for such a shot the helmet is the only thing standing between you and a head injury in the event of a slide or fall.

For the shot I used my Sigma 10-20mm lens at 14mm. The cable release was connected to a length of string tied around my belt. After activating the self timer mode on the camera I was able to drop the trigger behind me, out of frame. The camera was connected to my TV to allow be to review each shot without moving. A very important consideration when standing on top a couch locked into ski bindings. 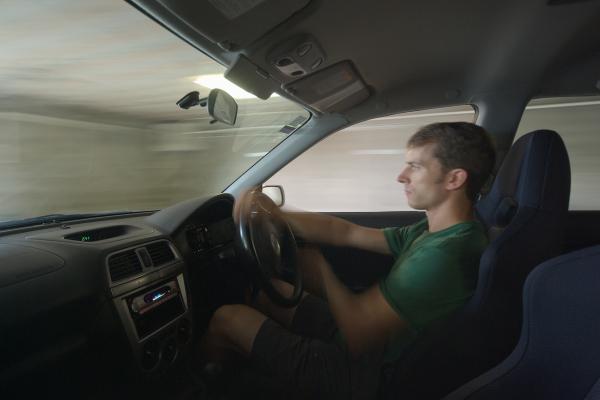 The location for this photo was the basement carpark in the office building where I work. The photo was taken on a Sunday afternoon when no one else was around. Over the next few weeks it will be interesting to see if anyone in management comes to have a quiet word with me after reviewing the carpark security cameras.

My Sigma 10-20mm lens was used at 13mm for the photo. the camera was mounted via a suction mount to the outside of the cars passenger window. The dark environment made it easy to select a slow shutter speed that gives the illusion of speed. A single strobe was placed in the instrument binnacle. The stroke was fitted with a half CTO (Colour Temperature Orange) gel and a grid. it was fired using a Cactus V2S wireless trigger. 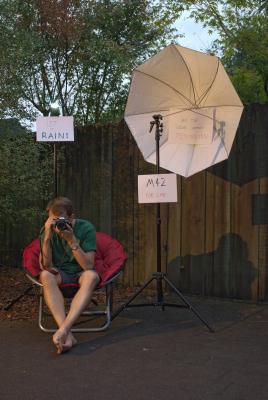 Here I was using my Pentax FA 28mm lens. A strobe with a CTO gel was placed to camera left to create the illusion of a sunset. This strobe was fired using a Cactus V4 wireless trigger. The strobe in shot was triggered optically.

Despite the drought conditions across most of New Zealand at the moment (the reason for the "Let it Rain!" sign behind me), it had just starting to rain at the time this shot was taken. The prop camera is a non-functional Pentax Program Plus.

All three shots are self-portraits taken without any outside assistance. The camera used was my Pentax K10D. In all cases a cable release on the end of a 4 meter (approximately 13 feet) extension cable was used to trigger the camera. The self timer feature on the camera was used to give me time to remove the cable release from frame and compose myself before the shutter fired.

If anyone reading this wants further information on my technique, let me know and I will try and pull together a tutorial.