I am not sure when or how it first started, but I do know that the people close to me in my childhood have instilled within me the spirit of openness. My godmother, Shirley, has always told me that I can do whatever I want when I grow up and to always try new things, greet new people, and have a positive outlook on life. I feel that this has been crucial to my life motto. Some might call it reckless and naïve, or unplanned, but somehow whenever I truly undertake something and fully invest myself into it, no matter how blurry the outcome may be, I am always reassured that the clockwork will follow and that everything will work out in the grand scheme of things. All it takes are glasses half full, charms galore and the heart of a bull. Optimism, determination and resilience, and a bit of luck in the mix.

The first picture of a view from atop the mast of the Wild Goose sailboat was taken in November 2012. I had always wanted to try sailing once, and found at the time of my study abroad semester in Hong Kong, that it was much easier to crew aboard boats in south-east Asia and Australia and off the East coast of Canada. I therefore scoured crewing forums and websites to contact sailboats which whom I could meet up and was lucky to get a positive reply from the Wild Goose in Australia. I booked my tickets from Hong Kong, flew 9 hours to Sydney, trained 8 hours to Grafton where I spent the night outside, bused 2 hours to Yamba, and took a ferry for 30 minutes to Iluka where I would finally end my wild goose chase (pun intended). It was a crazy journey getting there and an even better one on it. I was able to experience Australia in a way different from normal backpackers. It was a spiritual journey in sorts, being on the sea with the dolphins and whales, drinking the golden sunsets and sailing through the night under the starry skies. Getting atop the mast was exhilirating and offered a great view.

Whether it’s participating in a regional and then national level engineering competition to win top honours or embarking on an 8 month adventure overseas away from home, I know that I cannot fail. In fact, that trip has led me to many first time experiences. I believe that this is truly fearlessness, not merely the absence of fear, but the will and ability to go beyond one’s limits to achieve endless opportunities. And so, fearlessness has seen me riding at 200 km/h on the German Autobahn. It has seen me doing stand-up comedy for the first time at open-mike night in Hong Kong. It has offered me countless breathtaking rooftop views across Europe and connected me with its warmth-giving people. Finally, it has taken me on a marvellous adventure on the seas off the Australia east coast.

The second picture was taken in July 2012 in Germany where I was doing a research internship. I had a conference to attend with all the other participants of the internships across Germany (all the participants are either North American or British). My friend and I decided it would be a great adventure to bike the 110 km there in a day (11 hours) and then another 30 km followed by a couple hours hike in the Saxony Switzerland national park with the magnificent sandstone cliffs a few days later. Needless to say, the first half was quite daunting but we overcame it, although quite thirsty and exhausted at the end as it was a hot day. We departed at 3 AM in the cool and arrived around 2 PM in the beating sun. Halfway through we wondered why we even got the great idea to do this and kept considering catching the train every time we were near a town. When we finally arrived at the national park, it was quite dark and we weren't able to make our way to the free shelter spots located near the cliffs. We were therefore stuck without shelter as we had no tents (you can't bring a tent to those shelters). Luckily, the helpful people in the village pointed us to a man running a bed and breakfast who allowed us to stay for free in his common room, he even offered us beer

All is well that ends well!

Over the course of that 8 month trip, I traveled to many countries in Europe, Hong Kong, Vietnam and Australia, each destination richer than the last. I snapped over 15 000 pictures, which might not be a lot to many of you, but to me it is. I’ve since felt the limitations of my cheap, light and robust 18-55mm kit lens that came with my little K-x. The dynamic duo has seen rain, sand, bumps and scraps and has lived to tell the tale of my journeys (I don’t have a lens cap as it allows for quicker shooting, and there hasn’t been a scratch on the lens coating yet, terrific stuff Pentax! I also don’t have a case, I just throw the camera into my backpack.). While the lens has served me well, its softness does frustrate me at times compared to the pictures other people show me and its slowness also reduces my performance for low-light and action photography. Therefore, the DA* 16-50mm F2.8 lens would be perfect to overcome those limits as I head this year on a 4 month trip to Asia with my sweetheart, where we will head to the Everest Base Camp, the beautiful beaches of Thailand, the countless temples of Burma, the lush land of Vietnam, the ancient Angkor Wat and finally to the delicacies of Hong Kong. It will be a big step for us in our relationship as it will be our first time being together for an extended period of time. I thank you Heie for this opportunity and hope that this has shown you that your lens would be put to good use (I’ll take much better care of it than my kit lens, please don’t worry). 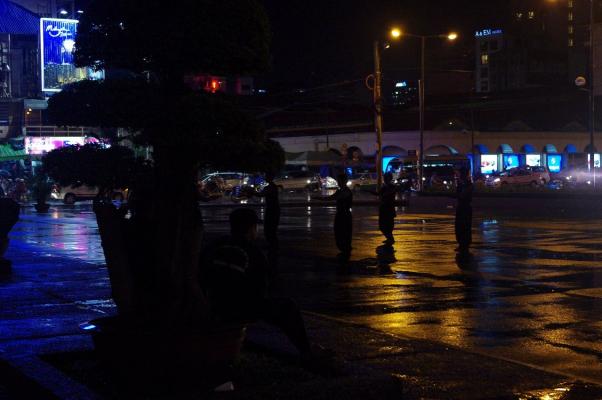 The final picture was taken in Ho Chi Minh city in Vietnam in September 2012. I was there visiting family before school started. Although Vietnam is still a socialist country, it has followed a capitalist development in the cities. Now shining neon billboards can be seen everywhere and cars travel incessently across its street, even in the late hours. The pictures show a group of martial artists practicing in the rain near the town square while two onlookers take shelter under a wide bush. Even though it shows signs of richness, many people still have low income. Therefore, rent for a room to train in is quite prohibitive. But we all know, the outdoors is best for the body! It was not raining too hard, so I was able to shoot for a while in the dark before fearing for my K-x's health. After all, when else would I get the increased lighting caused by the raindrops?

The three pictures I chose demonstrate different aspects of the idea of fearlessness. All three were taken on my 8 months overseas.

Fearless in the Moment