There are many things that attract me to Japan but probably the one that has withstood best the test of time has been its martial traditions. Not so much those that have transformed into sports like judo or paths of self-discovery like aikido but the ones that remain as much as possible true to the values that led to their creation. These armed and unarmed arts are usually labeled “koryu” (“old traditions”) or “kobudo” (“old martial arts”) and are generally only taught in Japan, not because of elitism or secretiveness but because their system of organization and teaching is also old: non-professional teachers who teach in their spare time a number of students big enough to ascertain the viability of the ryu, the school/tradition. 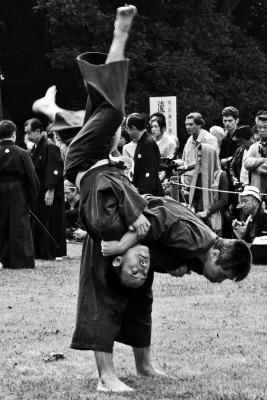 Overcoming the fear of others: Putting yourself in someone else’s hands is an exercise in trust;
it’s about seeing your partner as someone who wants to kill you but who will not harm you.

I am a regular guy doing a regular and rather sedentary job (journalist/translator); this means that any dexterity, armed or unarmed, I have gained after three decades of training in Japanese martial arts have never been tested in action and they probably never will. And even if at some point a need to defend myself or my loved ones arose, I have serious doubts that the use of a 7ft medieval halberd or a sword would prove to be of any help: if these arts have any relevance in our world this lies beyond the use of the weapons.

This is where fearlessness kicks in: martial arts’ training is not about becoming some Hollywood-type ninja scaling walls and throwing star-shaped blades but about facing first you comfort zone and, with time, your fears and moving your limits further and further. Every time you step into a training hall you test every part of yourself, from your stamina and your bodily strength to your courage and your morals; few endeavors can be so demanding on your awareness and your ability to focus and equally few can be that rewarding. 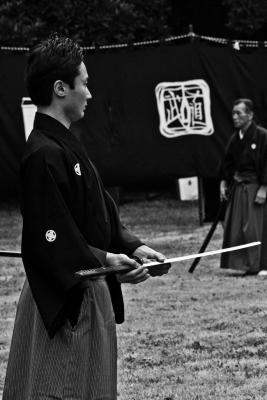 Overcoming the fear of the weapon: Training with a live blade asks for the awareness and focus of a tightrope walker;
your own weapon can harm you if you miss the balance between fear and respect.

If it weren’t for this training I wouldn’t have been in Japan: having lived through two big earthquakes in Greece and being terribly afraid of flying, it would have been impossible to decide to jump on a plane and travel 12 hours over half of the world to the most earthquake-prone land on the planet. Furthermore, it would be more than impossible to quit a 25-year long career centered on the knowledge of two specific languages and move to a place where these languages are more or less irrelevant and try to start a life there.

But it happened and I’ve been here for four years now. They haven’t been easy but it would be a lie to say that they were hell either; for one and besides my other interests I was reacquainted with photography after more than twenty years and I’ve been trying to document the country and its people as much and as best as I can. More than 100.000 pictures later, I still find interesting subjects, things to learn about my rig and photography and a stronger will to go out and shoot. Nothing of these would have been possible if it weren’t for having to face my fears through training in these arcane arts. 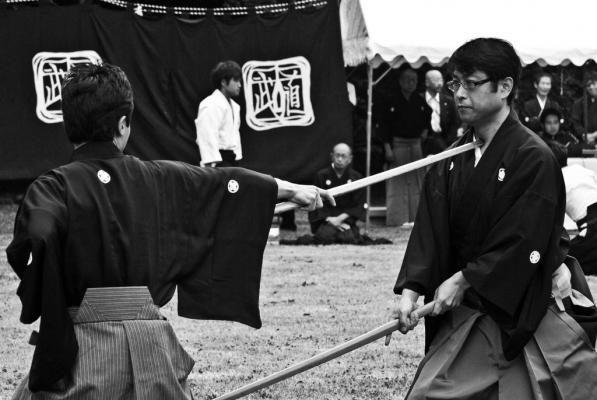 Overcoming the fear of action: Understanding timing is the Holy Grail of the martial arts;
one second later or one inch further and you’re dead or seriously injured.

I thought very hard if I would try my hand in this contest; don’t get me wrong: I want this lens (I mostly shoot using the DA 16-45 so the DA* 16-50 is the perfect upgrade) but I wasn’t sure if I qualify. But then it occurred to me: this isn’t about proving I’m some daredevil who won’t stop at anything to get the perfect shot or trying to measure up against someone else’s idea of what fear is –especially a professional soldier’s!- but about saying something about my fears and about what helped me overcome them. The martial arts did it for me and every time I see a picture I’ve shot I know that if it wasn’t for them and the part they played in overcoming my fears I wouldn’t have been there to shoot it.

Fearlessly in the Surf