I think the stories behind these photos suggest it's good to be fearless more than the resultant photos, but I'm not exactly a wild and crazy guy. A brief disclaimer: these photos aren't my best work, but they are each from a time when I feel I was operating fearlessly. 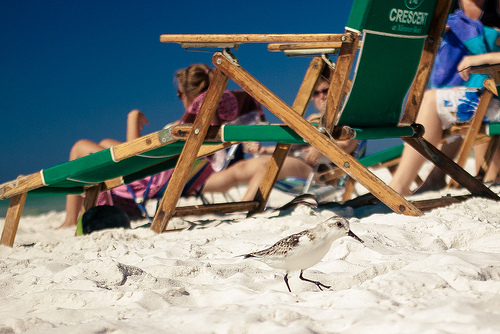 Frankly this isn't my best shot ever, but I think it captures the theme pretty well in the sense that a lot of people wouldn't dare lay down on the beach with their DSLR. It's not that I don't care for my gear, but I buy it to use it and I'm not afraid to lay down on the beach to catch an interesting angle. This shot's nothing technically spectacular: 1/1600 at F5.6 and ISO 200. It was taken at 55mm with a K100D and 18-55mm DAL (I'm not so fearless as to risk/sacrifice too much). 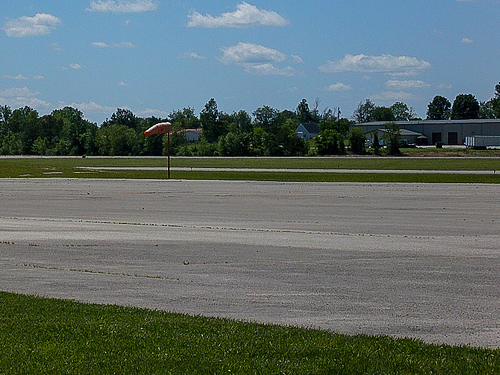 Looking at this (snap)shot might not appear that fearless, but it comes with a story. This was taken about 3 months after I'd gotten my private pilot certificate. I decided it might be nice to take my father, who'd never flown anywhere, on a quick flight north for a burger. Somewhere along the way, the winds started gusting pretty strongly and we were getting blown all over the sky. Anyway, as (bad)luck would have it, the wind lined up perfectly for a direct crosswind at our destination. Not wanting to seem incapable, I gathered up every bit of ability I'd gathered in training, cast out the fear, and landed in spite of the wind. Once we got the plane tied down, I shot this across the ramp. I'd have liked to catch another plane landing, but the only other traffic was an air ambulance helicopter and he cheated and left across the field into the wind. It was a fun and memorable day and that's why such an uninspiring photo says, "it's good to be fearless" to me. 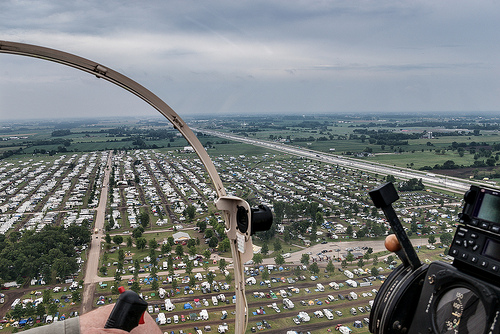 For my final shot, I present a photo I took while hanging about 1/3rd out the side of a helicopter. I didn't have wide enough angle lens to get the shot I wanted. I really wanted to catch the other two occupants of the helicopter, but the widest lens I had was an 18-55 kit lens. As you can see the sides of the helicopter (a Bell 47) are open, so in a moment of fearlessness, I leaned as far out as I could and snapped this shot. I'm kind of mad that I wasn't zoomed out all the way, but it isn't shaky. I never really considered how much the wind and the inherent shakiness of a helicopter would affect photos; the other 30 blurry shots are a testament to this fact. In the future I might try something faster than 1/125 or wider than F13, I guess a higher ISO wouldn't have killed me (shot at 200). Anyway, on this particular day it was good to be fearless, because I got an interesting shot in spite of gear limitations and poor setting choices.

I think "It's good to be FEARLESS" is a very apt description of my photography, because I don't usually worry about much when I'm shooting. Specifically, I'm not someone who babies my gear. I care for it sure, but given the choice between wrecking a lens and missing a good shot, I'll wreck a lens. I think the ruggedness of the gear is exactly what lead me to Pentax in the first place. To that end, I feel like this DA* 16-50mm would help me continue to grow by providing a more rugged weather-sealed lens that pairs nicely with my K20D. I've grown a lot photographically in the last few years and I'm starting to reconsider my super-cheap setup especially as much as I've had to clean and dry out my kit lenses. I'd feel less bad about taking something like the DA* 16-50mm out in the dust, dirt, and rain in search of great shots than the less capable gear I currently own. I was looking at stepping up to something like the 18-135, but getting this particular lens would be much more meaningful and would serve as a reminder that "it's good to be FEARLESS."

In any case thanks for the opportunity to get a really awesome piece of kit.