The Importance of Fearlessness

Being fearless to me is something I don't always have when it comes to taking pictures. I have to often times push myself to go out and take pictures that are out of my comfort zone. As a high school photographer, I feel like there are different aspects that require fearlessness in a photographer.

Being fearless with your gear and body (human body; camera body is part of your gear) is very important. I have a 50-200 WR kit lens that allows me to do that. But even so, sometimes I just don't feel like going out to take pictures because "it's raining" and "the rain won't allow me to get good pictures" etc. But what I have found is that if I dig down deep into my guts and pull myself out there, I will be able to take decent pictures. 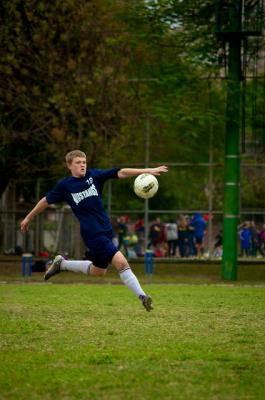 Context: This picture was taken during a rainy day at the Middle School soccer tournament. The kids had been playing at least 4 games that day and this picture was during the championship game where the Morrison Mustangs (where I study) are up 1:0. The defender (as pictured) is hustling to the ball after it was popped in the air.
Process: I currently live in Taiwan, and during late winter and early spring, rain can be extremely heavy and commonplace. That day started out pouring rain and games that were scheduled for the morning were delayed for more than an hour. As it continued to rain slightly, I still was sitting my lazy butt at home. But as I heard our school was in the championship game, I urged myself to go out and shoot. I grabbed my K-5 along with my WR lens and out I was in the middle of an intense and rainy soccer game. As a result, I ended up with a picture of Josh, the defender, looking determined to win, and most importantly, one that represented my fearlessness to shoot in the rainy and gloomy day.

In addition to pushing yourself to going out to shoot photos, it also takes great amount of mental fearlessness combined with some physical abilities. In addition to one's physical limits, there are also social/mental humps that one needs a great deal of fearlessness to overcome. Oftentimes, taking pictures requires some talking. Especially when in the photographer's mind, a perfect scene just pops in the head but without communicating with the subject it is not possible to get just the right composition and/or expression. 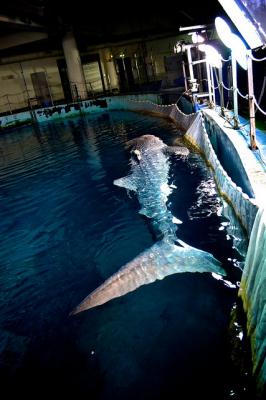 Context: This was actually one month before I got my Pentax and this photographic experience was what motivated me to get my own camera.. This was taken at the National Museum of Marine Biology and Aquarium in Kenting, Taiwan. The photo was taken during my Freshman year during the Biology trip. We were on a behind the scenes tour, and we took a look at the huge whale shark tank from above. It was the coolest and scariest experience I've had.
Process: What makes this photograph special is how I got the shot. As you can see, there is a small fence. Despite the sign that told me not to lean over, I did it nevertheless. Thankfully, I did not drop the camera into the huge tank full of fish and sharks. I ended up with a photo of the fierce yet peaceful whale shark. It also represents my fearlessness during taking the photo.

For me, a photographer at a young age, it sometimes is very hard for me to speak up especially with peers and other adults around. Therefore, being fearless can be an advantage to me in different ways. First, fearlessness allows me to shoot in ALL sorts of weather and rewards me with priceless moments. In addition, it allows me to capture moments that may have not ever occurred. And that's why it's good to be fearless! 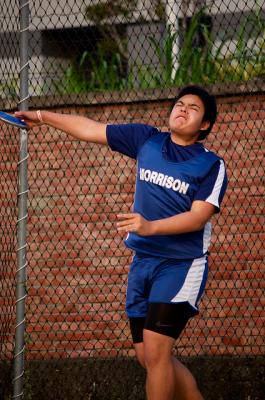 Context: During a track and field meet in the month of March at Morrison Academy.
Process: In my opinion, I'd never do discus. People just throw a disk shaped object as far as they can, and secondly, the photographer is always in danger. This is why I think it requires the photographer to be fearless when capturing the image.

With this opportunity to be able to have such a lens is quite rare and amazing. Thank you for such an opportunity, Heie! But if you ask whether I will be worthy of this lens? Yes of course. The lens will be be a great boost for my fearlessness, not just because of the WR letters on the front, but because I know someone has taken it through fearless experiences and I will do the same also. This lens will be great for sports (F2.8!) and will also be great glass for street photography (16-50mm). There are just so many things I could imagine if I had this lens! But all in all, fearlessness it is and the DA* 16-50mm F2.8 will definitely help the cause.