Photography is over film. You should be, too! 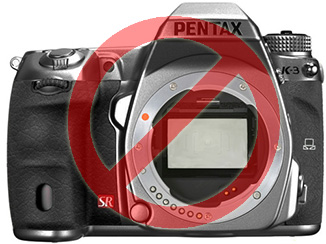 Please never, ever, under any circumstances build a "35mm Full Frame" DSLR.

It wouldn't be very…Pentaxian. And "35mm Full Frames" are kin to the fax machine and transistor radio, and will suffer the same fate for the same reasons.

Technology is utterly predictable in the same fashion as the weather. Specifics are hard, and get harder the further out you look. Will it rain? September 22? 2038?

But the general trends are obvious to the point of boredom.  Summers hot; winters cold; carry on.

Technology is exactly the same. What will be the must-have gadget? September 22? 2038?

Recent life is rife with examples. Remember the candy-bar cell phone? It was basically a cordless phone with more range. Remember the one-line screen above the buttons that showed Caller ID? Check out the phone in your pocket – screen's a bit bigger, no? And where are the buttons?

The fax machine shows you how this process works. The typewriter produced neat documents. Word processors allowed you to edit documents, then print them out. Then fax machines shot those documents anywhere in the world over phone lines.

Everyone five minutes later: @!$&#!! Now I have to type this thing into my computer. Let's invent the scanner.

Everyone 6,789,402 dead trees later: What if we skip all the printing and scanning and JUST SEND THE DOCUMENT.

Which, alas, led to emailing and texting and the antediluvian horror known as PDFs.

Now we know what you are thinking, Dear Reader: Is there any popcorn? Anything new on Netflix? And why didn’t this nincompoop unleash this caterwauling back when Nikon and Canon were getting into DSLR game?

Well, there are two responses. First, there was a heck of a lot of money in fax machines and candy bar cell phones when they were riding high. Remember when Nokia was a colossus, before it turned into a division on Microsoft's back lot somewhere between the Microsoft Mouse and the Kinect?

Oh, and I did, but before that, back when we were paying something like $20,000 for that Kodak/Associated Press/Nikon Frankenstein camera at newspapers trying to go digital.

But here's the heart of my harangue: Yes, it would be launching a product into a dying niche. But my real heartburn is that it just wouldn't be Pentaxian.

So I ask you: What makes a Pentax a Pentax?

A tank made me a Pentaxian. My first posting out of the Defense Information School was Fort Stewart, Georgia, with the 24th Infantry Division (Mechanized). Fort Stewart is a giant Army base with plenty of room for tanks to roam, which meant it, like most big bases, was built on land no one else wanted. In this case, swamp. (Another popular choice is desert: see Fort Irwin, California.) We were issued Canon F-1s, which always seemed to have some problem or another. I was out shooting with another Army photojournalist who had his own camera: a Pentax K1000. I was shooting something or other when he came up, frantic. Seems he'd put his Pentax down on a tank track to talk to somebody, and when he returned…the tank had left.

Fortunately, we were in boot-sucking swamp. (We were not fortunate in the mosquitos produced by said swamp, however.) We dug around in the muck, and found the K1000. The lens was a goner, of course. So we pried it off, he put on another…and finished the roll of Tri-X in the camera. Got a couple of those shots in the following week's paper, too.

And I thought "Man, I need one of those." Saved my pay and bought an MX. Still have it. 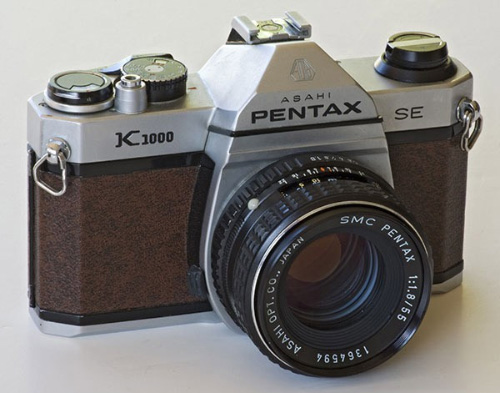 This brown K1000 is the twin of the one that survived the tank.

The MX turned out to be my gateway drug. Within two years I was living in Tokyo shooting for Pacific Stars & Stripes and spending every spare nickel on Pentax bodies and glass, new and used. My daily setup was an LX loaded with Tri-X and the 135mm F1.8; a second LX with Tri-X, the 20mm F4 and the grid focusing screen; and the MX with Ektachrome and one zoom or another. My Domke bag was stuffed with glass, extra film, a monopod, flashes, batteries, notebooks, pens, and lord only knows what else. All the bodies had winders mounted; all the glass was Pentax. I carried so much stuff I started to list to starboard.

But after a year in Asia I fell completely in love with a little cutie. Soon all my time off was spent with my new love: a Pentax Auto 110 Super loaded with Kodachrome on a wrist strap, and the complete kit lenses in my pockets…

We lived in the camera cornucopia that Tokyo was in those days, yet almost all of us shot Pentax. We shot in endlessly harsh conditions: Fort Irwin in the Mojave desert (before I went to Japan); night carrier flight operations with the USS Midway shuddering through 10-foot rollers in the Sea of Japan; half-frozen in Korea as a wind called the Siberian Express wailed out of…well, Siberia. Yet almost all of us shot Pentax.

We did it because of what makes a Pentax a Pentax. Take a look at the LX and its competition at the time: the Nikon F3 and the Canon F1.

A Pentax like the LX is a photographer’s scalpel. It’s small. It’s light. It’s rugged; check out the weather sealing and mechanical shutter mechanism that kept us working even when the batteries died. It’s easy to use. And its cutting-edge technology was focused on solving specific photography problems; the LX was the first pro SLR with weather sealing. And it had interesting, quirky touches, like diopter correction in the view finder so shooters with less than perfect eye sight could shoot without glasses, and the frame counter counting – accurately – both ways to facilitate double exposures. 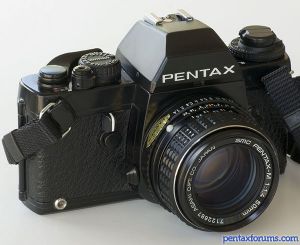 The Pentax LX is arguably the best Pentax camera ever made.

Best of all, unlike a lot of camera companies, Pentax was loyal to its customers. All the previous lines of glass worked on the LX: Ms, Ks, Super Takumars…even screw mount lens would work and meter, albeit stopped down.

What Pentax didn’t do was get involved in the feature arms race that gripped Canon, Nikon and others.  As companies larded on priority modes, emergency shutter releases – which the LX didn’t need, because the shutter worked without batteries – size, and weight, Pentax focused on the glass, introducing gems like the 135mm F1.8.

Life happened to me, as it does to all of us, and eventually I stopped shooting, became an editor, and ended up in technology, which is, Dear Reader, a story for another time. Eventually my kids bought me a K20D for father’s day. I was overjoyed! I dug out my old gear and stuck the 135mm F1.8 on it. A kid said to me "You know that isn't going to autofocus," and I replied "Ummmm….good. I'd be sort of freaked out if it did."

While I was and am grateful to my children, I've never really connected with the K20D. It's big. It's fat. It's clunky. It has apparently 1.8 kadjillion modes.

It's a lot of things. But it's not really…Pentaxian.

So, let us review. Pentax cameras are photographers' scalpels: Tough. Light and small. Simple and elegant. With quirky little touches that fit photographers.

DSLRs are fat, clunky, and jammed with features that no photographer uses after showing off for the first week. And unless you’re sticking 35mm film in the body, a full frame camera is any box that has the lens correctly cover the sensor.

Not literally. I wanted the vision that 6x7 represented. Out of the box thinking. Never "Me too." When you first see a 6x7 you realize it's just right – a body not that much bigger than a fully loaded F3, but with a negative the size of your face. (Almost.) A camera that would handle in the field the way the giant clunky medium format competition would never do outside their natural studio habitats. (I freely admit I've never understood the Pentax 645.)

The kind of thinking we're seeing now with things like the Lytro Light Field Camera, and the multi lens efforts appearing on cell phones.

Or, better yet, a digital version of my favorite camera of all time: The Auto 110 Super.

So I'm here to tell you Pentax has already built a digital full frame camera.

It's called the Pentax Q.

Let me tell you a story about the LX. I'm running down a street in Tokyo, chasing Japanese Elvis impersonators. (Yes, seriously.) I trip and start to fall. I'm wearing three cameras, as usual. I grab the LX with the 135mm F1.8 with my left hand, the MX with a telephoto zoom with my right, jam my left knee down, and hope the strap on the LX with the 20mm F4 is short enough. It isn't. That LX bounces off the concrete sidewalk; I catch it before it hits again. The lens is fine; the right top corner of the LX is dented. Everything works, so I finish the shoot. Never even sent it in for repairs.

Let me tell you a story about the Q. I'm walking into a friends house after a shoot. I'm loaded with stuff; my Q is (stupidly) in my hand. I didn't realize their dogs were behind the door. Both friendly dogs jump me; one gets tangled in the Qs strap. The strap pops and the Q bounces off the concrete floor; I catch it before it hits again. The 03 lens is fine; the Quick Dial on the front of the Q is dented. Everything works, so I bend it straight and go back to shooting. Never even sent it in for repairs. 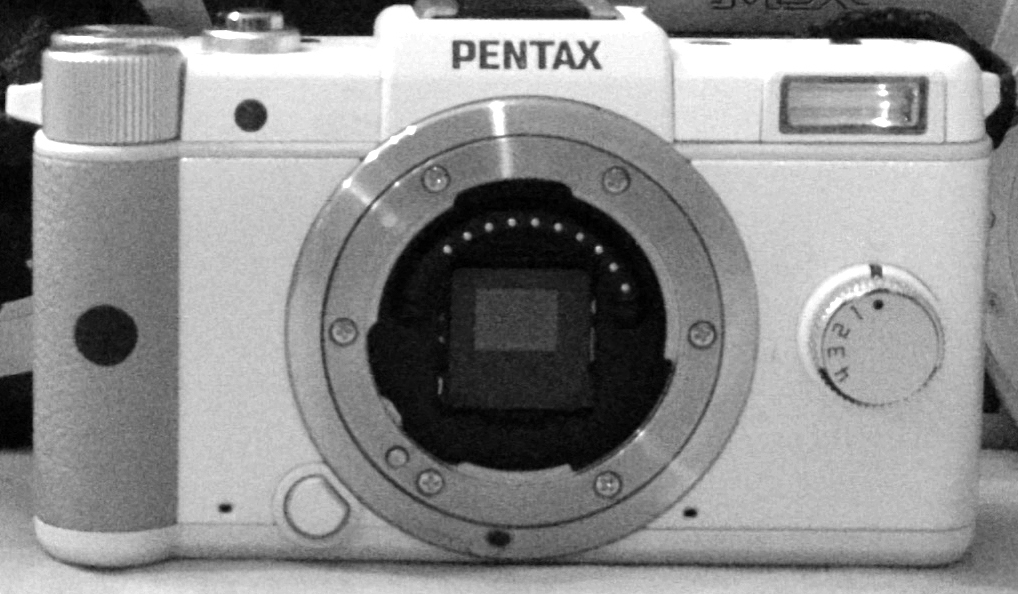 My white Pentax Q. Note the dinged up Quick Dial (click to enlarge)

Like the LX, the Q is a photographer's scalpel. Take that Quick Dial: it lets you save up to 4 custom set ups and switch to any of them in an instant. Its rugged. Its got great lenses: the 01 is quite the gem, and I think you'll be shocked at how good the 03 Fisheye is for a $100 lens.

By the by, photographers have always argued about resolution. They argued Leica vs. Nikon vs. Pentax when I was shooting LXs. I always gave them the same response: we're shooting Tri-X for half-tone screened prints on newsprint. Who cares which lenses have 100% more resolution than we can print, or only 95% extra?

I bought the Q hoping it was the modern Auto 110. It turned out to be the modern LX. I have three. And I'm hoping on a Q7 for Father's day…