Fiji Time with the Pentax K-3

The best gear for a quickie island trip 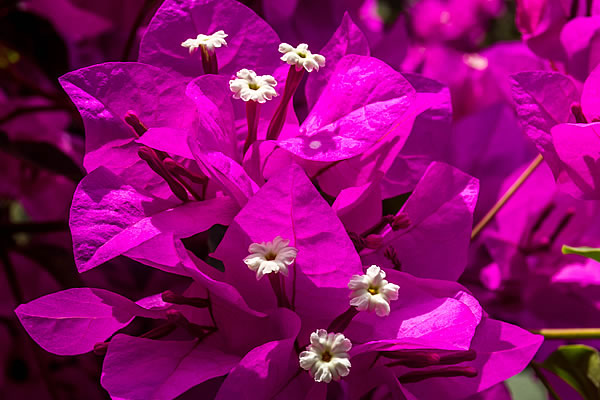 It started with my Frequent Flyer panic

What’s it like to take a substantial Pentax camera on a quick overseas holiday? What lenses should I include or would a pocketable iPhone or smaller point & shoot work much better? These burning questions were on my mind as I realised I had too many frequent flyer points at stake if I did not commit to a holiday in the next few days.

So I splurged them all on a four-day trip to Fiji, three days and nights on Bounty Island, about 15km from the mainland and a day and night around Nadi, locale of its international airport.

Landing an hour later than scheduled, I grasped the meaning of “Fiji Time” -- “Don’t worry about time; it will eventually get done, and if it doesn’t, it is not that big a problem anyway,” a favourite counsel of local natives, states. 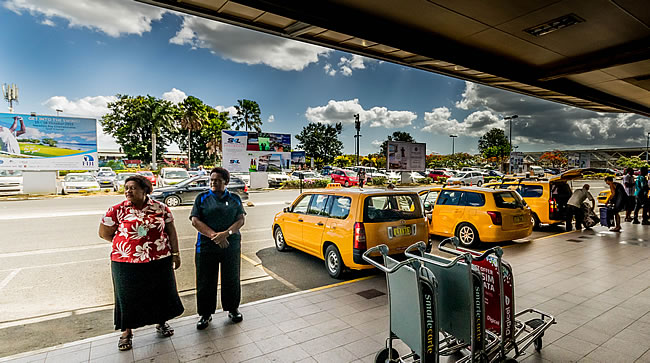 My delayed arrival was matched with a missed connection to the boat to Bounty Island, not to be confused with New Zealand’s “Bounty Islands”, named by Captain William Bligh in 1788 after his ship.

Bounty “island” resort is actually a small elliptical-shaped sand fringed coral atoll, without natural water but lots of tropical bushland and friendly staff. It is 20 min (give or take a few hours) from the mainland Vuda Marina and closest Mamanuca Island to the mainland.

The Mamanuca Island group (pronounced Ma-ma-nootha) is a collection of 20 small islands set among deep blue waters off the west of Viti Levu (one of the two major islands of Fiji). Tom Hanks’ film Castaway was shot here as was a remake of The Blue Lagoon.

Barely a mile in length and half a mile wide, pointing NW and SE, surrounded by coral and pristine emerald coloured waters, Bounty Island is perfect for snorkelling. You can circumnavigate the island in a leisurely saunter along its sandy perimeter in under an hour. 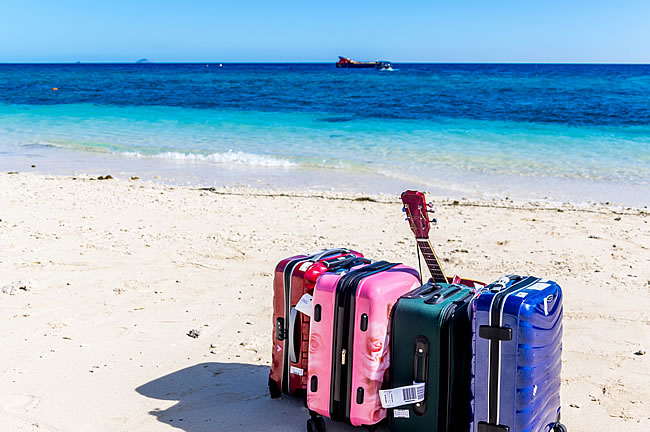 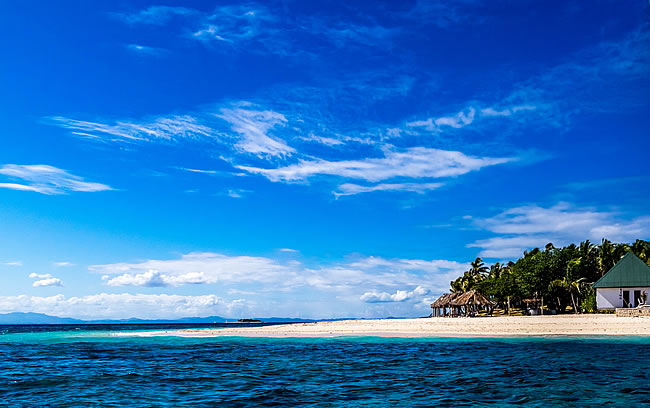 Along with a large dorm, the Island accommodates 22 bures (huts) with beds, showers, toilets and air conditioning as well as an excellent resort bar, pool and dining area.

I used to travel very light -- just me and my pocketable Lumix LX-7. This year I had my K-3 and my clutch of K-mount lenses to choose from. So I opted for my Sigma 17-70mm F2.8-4.5 as the default. Also I packed a Pentax 40mm F2.8 pancake prime limited edition that was delivering great looking images since I’d corrected it for a substantial back-focussing problem. Also I had a 10-20mm Sigma F4-5.6 wide-angle zoom and my Pentax A 50mm F1.7 manual focus, perfect for low light situations, which I stored into a spare woollen sock. As well I packed my second-hand Manfrotto 680B monopod which compressed nicely into my small baggage case.

I estimated two fully charged D-Li90 batteries would be adequate. Taking multiple shots in succession and the occasional video with the K-3 can suck up the juice very quickly. The indicator was on the yellow coloured last tab of my second battery on my last day.

I found no shops in Nadi that stocked Pentax-compatible batteries. I should have packed the charger instead of the monopod. I also learned to switch off the K-3 after every shot. To my relief, the last battery kept going right up to my return to Canberra. I have since ordered another four spares for next time.

Gear that helped and gear that did not.

Of the over 700 images, two thirds were with the Sigma 17-70mm F2.8-4.5, about a quarter with the 40mm F2.8 prime and the remainder with the 10-20mm F4-5.6 wide-angle zoom. The manual focus Pentax 50mm F1.7 prime never emerged from its sock and the monopod was only used one evening with indifferent results.

What I did miss was weather-proofed versions of the lenses. Though the monsoon season was due, it had not rained for about three months. But, each night, I noticed sand particles creeping into my kit that I had to brush away. Also I would have traded the monopod for a small GoPro style device for underwater scenes. 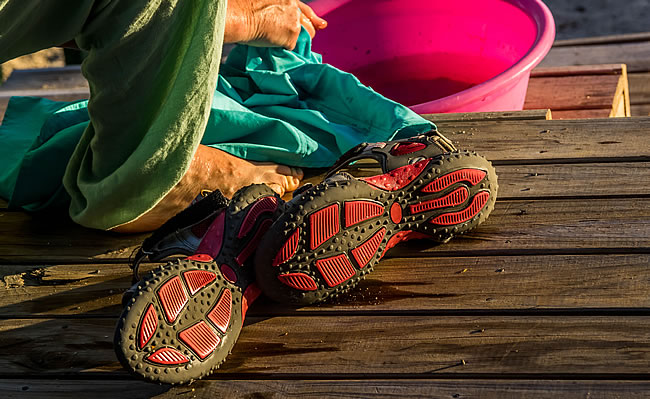 Still, I got to appreciate the K-3’s handling, learnt to expose for highlights and under-expose by a stop or two – a lot. The latitude of the K-3’s sensor out-performed its auto-HDR mode especially for the island’s sublime sunsets. I began to opt for manual modes more than I expected. Its built-in flash helped me even out the harsh day light confirming my wisdom of opting for it over the K-3ii. 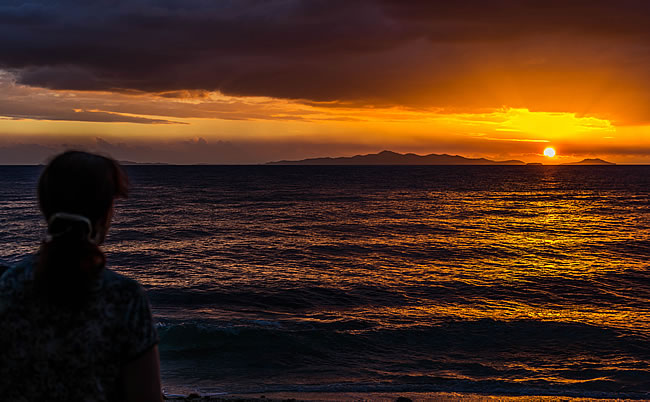 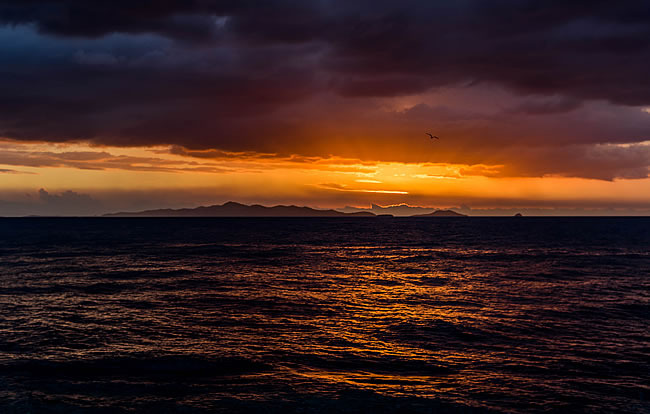 The 17-70mm F2.8-4.5 Sigma was sharper and wider than my standard Pentax DA 18-55mm F3.5-5.6 WR. But I bought it without its hood and had to be wary of flare. In the end, it teamed brilliantly with the K-3 and its lack of hood made it less imposing for spontaneous candids. I learnt to snap multiple times, smile graciously, check the result on the LCD and delete all but the keepers (or promising keepers) as I went. 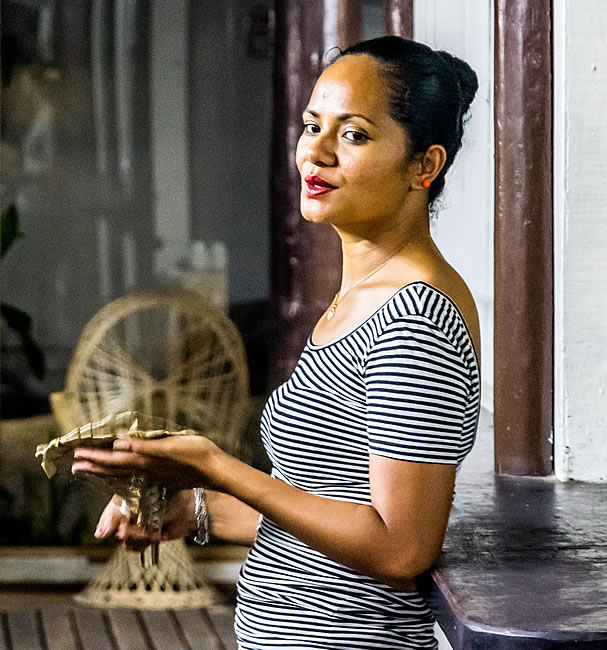 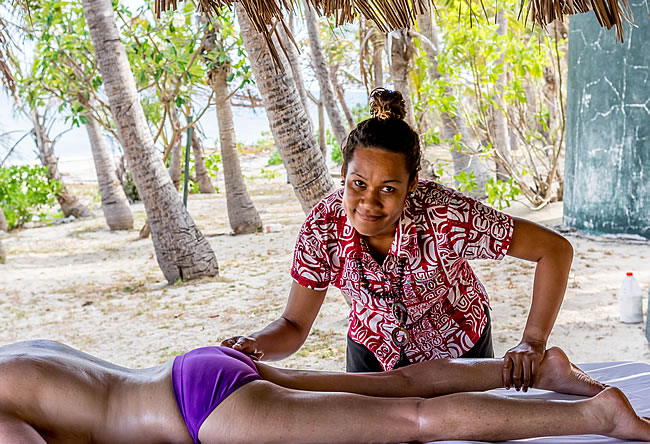 The lens proved adept at capturing birds such as Black-Naped Tern, Sterna Sumatrana and Buff-banded rail Gallirallus philippensis around Bounty Island. Though cropped closely, the results were quite acceptable and side-stepped camera shake had I opted instead for (say) a longer lens such as my 70mm-300mm Sigma. 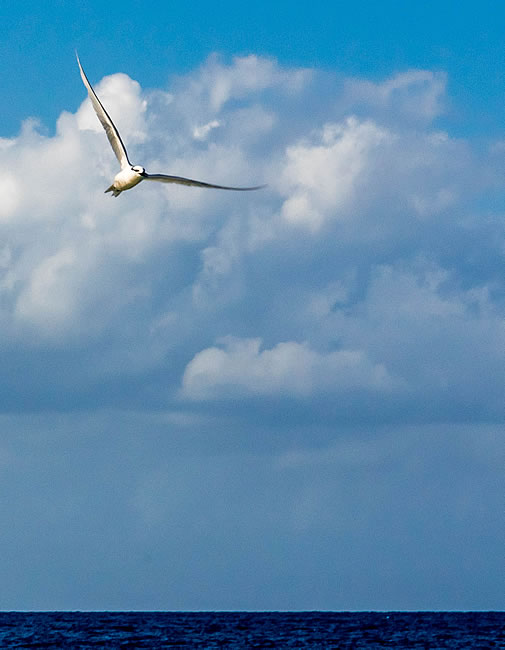 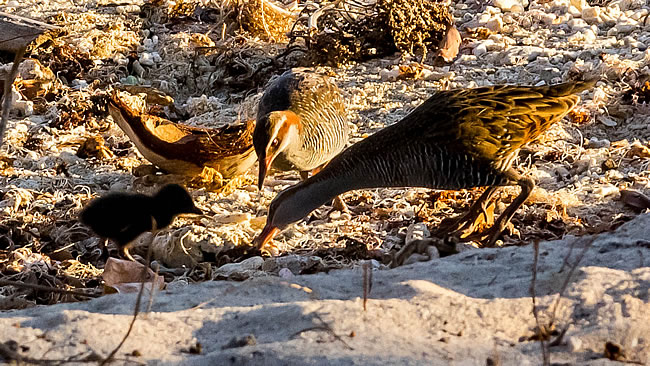 The trade-offs were interesting. A night with the Fijian staff showing off their vocal skills was easy to capture though I had to yank up ISO to around 1600 or more as they like to move and shake when they perform.

Which lens took the most “keepers”? 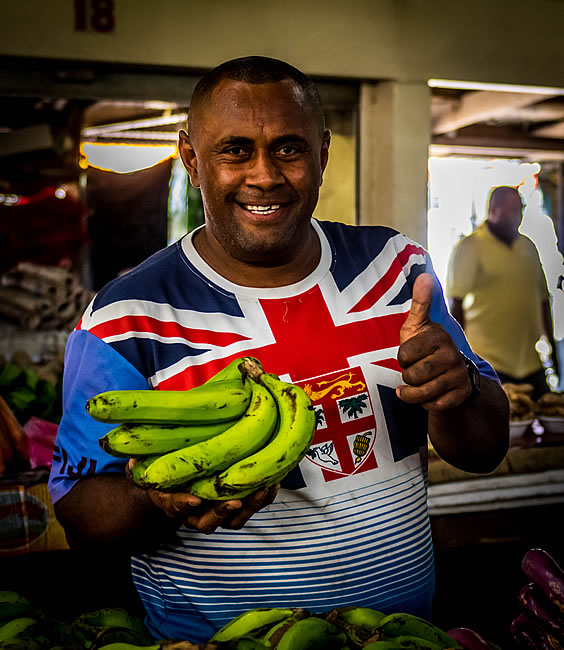 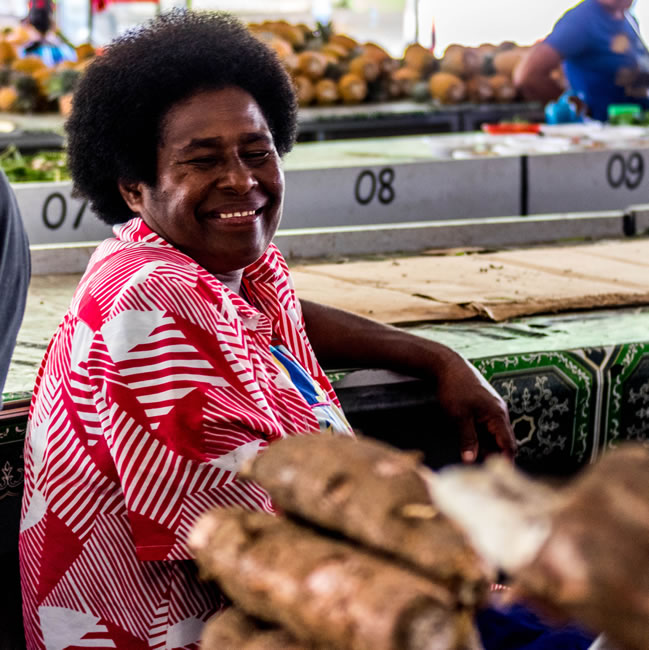 However the best looking shots came from the diminutive 40mm/f2.8 pancake affair. It came in handy on my last day when I shot some scenes in the local markets and caught a local dancing and fire-juggling native troop. 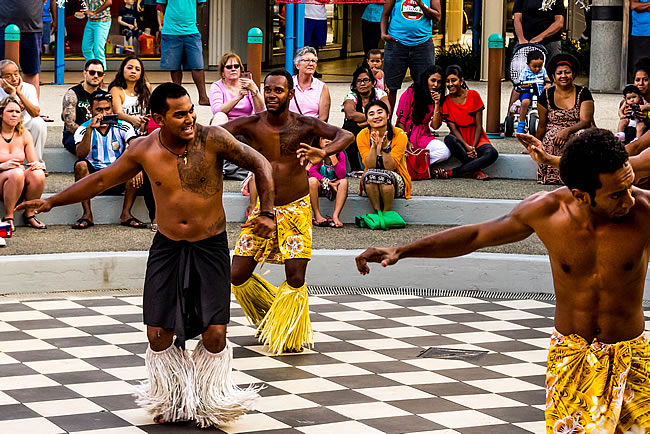 The 40mm lens seemed less intrusive to many locals but close enough for great portraits. It made it easier to rely on shake reduction for some of the dynamic fire-juggling shots which required longer exposures of around 1/4th of a second to capture the movement of flames. Again, exposing for highlights of flames in the late afternoon added a warmer light to faces that became apparent in post-processing. 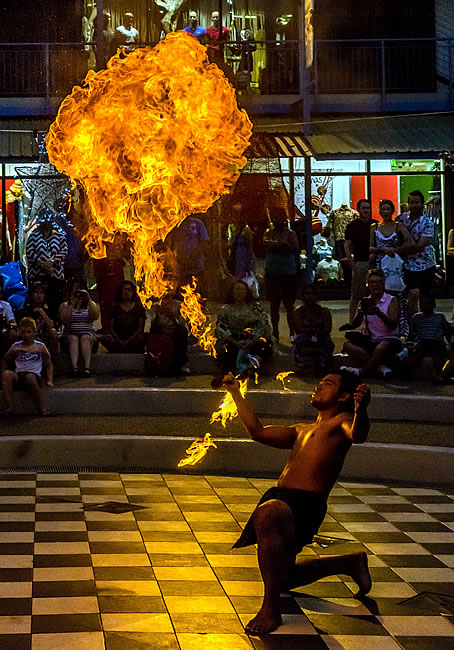 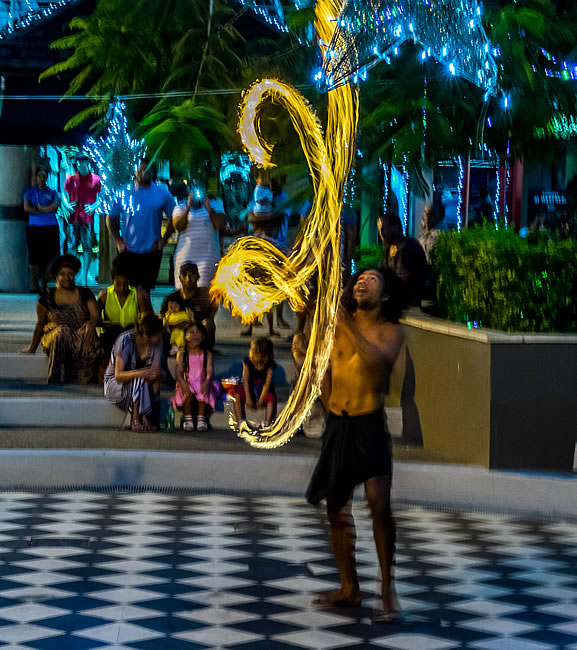 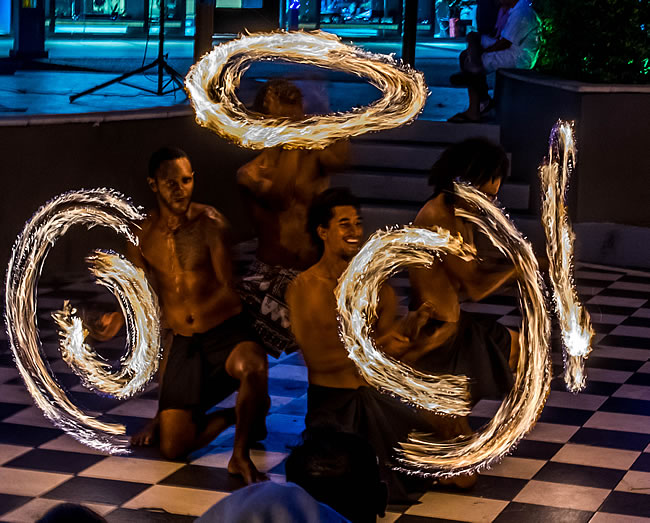 The Sigma 10-20mm wide-zoom worked well. I used it a lot while awaiting my transit to the Island. At 10mm it exhibited more distortion than I expected. Even using Lightroom’s lens correction to adjust was not that effective, either. But mid-range (say) around 12-15mm, it rocked as I captured some wonderful street photography. My moving in closer than usual made subjects unaware they were also part of that keeper shot. 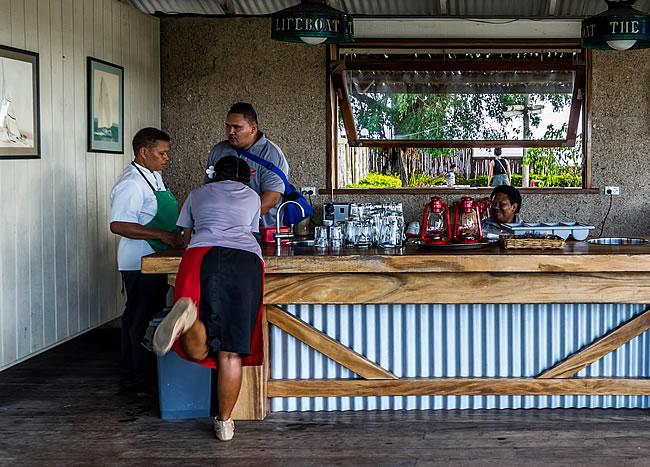 Also the Sigma 10-20mm resolution responds well to benign cropping to the subjects of interest. It is shaping up as the default lens with a second-hand canary yellow K-01 mirror-less camera that I’ve been scouting for. Next time, I am considering the lighter K-01 body. Its colour presents as a less forbidding fun cam for street photos and candids as well. It takes the same batteries as the K-3.

Moreover I feel like I am ready for more Fiji time already.

Tell us About Your Photo, Mike Oria