Tell Us About Your Photo, Keitha McCall

K McCall submitted a a highly emotive, environment-rich, and visually captivating image in the Post your Photos forum. Thank you, Keitha, for taking part in this ongoing series and for this fantastic contribution to our community. 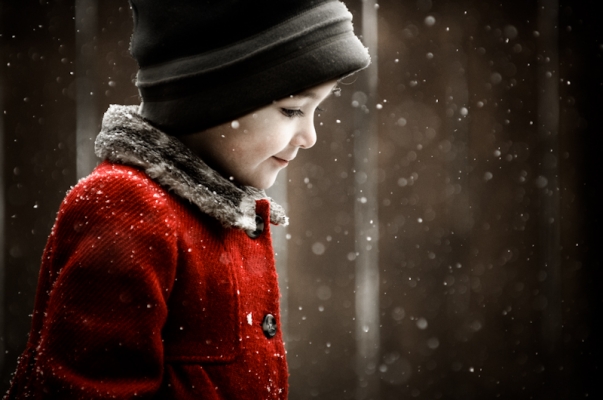 Like many photographers, I’m always on the lookout for beautiful scenery and great backgrounds. Although I often drag my kids to exotic locales to try to get great shots, this particular photo was taken in my un-exotic backyard in Dallas, Texas, during a relatively rare snowstorm.

We’d had a few days of off-and-on winter weather, but none of the snow had stuck to the ground. When I realized we were finally having some accumulation, I figured my three-year-old daughter would be delighted – and I hoped I could capture that delight with my camera.

Snow was in the forecast, so I had my camera at the ready with the weather-resistant DA* 50-135/2.8. I’d bought my daughter’s coat with future photos in mind. I should have been more mindful of her hat selection (the hat she chose was light blue), but a little Lightroom magic helped make the hat less noticeable.

I basically just opened our back door, let my daughter out, and dropped to one knee to get my shots. I’ve found that getting down to the kid’s level almost always makes for a great perspective. I didn’t actually think I was going to get anything great, and I wasn’t careful about checking my settings. I had left my camera at ISO 800, which isn’t what I would have chosen.

Being three, my daughter isn’t keen on posing or staying still. While that means I lose a bit of control, the unscripted moments tend to feature more authentic expressions. She was quite close to a boring brown fence, so I was shooting wide-open to help mitigate the unsightly background and to get a more otherworldly look to the swirling snow. I took a total of twelve shots, almost all of which were less than memorable. This one was the eleventh shot.

One unexpected “challenge” was the hat she was wearing. It was light blue and really threw off the otherwise classic look of the photo. Had this been a shot I had planned, I would have been more careful in the styling. Luckily, Lightroom has tools that would make the hat a better fit with the rest of the photo.

No other equipment was used.

I’ve used RAW since I discovered just how powerful RAW editing can be.

I use Lightroom 4 for my post-processing. I tweaked the white balance and did some major changes to each color’s hue, saturation, and luminance. I also changed all values in the camera calibration menu, which has a huge effect on how each color pops on the screen. I added a vignette to help disguise a black bar on the right edge of the photo. And as I mentioned previously, I used a brush to transform a light blue hat into the darker and more aesthetically pleasing hat you see in the final version.

I started taking photography seriously around 2006 and bought my first DSLR– the Pentax K100D– in 2007. I joined a self-portrait project on flickr that was instrumental in getting me to use my camera every day. My primary interests are travel and macro photography, although I find myself devoting quite a bit of hard drive space to photos of my two children.

My website is A Scenic World and features a blog where I discuss post-processing. I’m also on Flickr and Pentax Photo Gallery.