Tell us About your Photo, OlegP

OlegP posted a captivating photo of a Weimaraner and a Chinese Crested Dog. in the Post Your Photos forum. Thank you, Oleg, for taking part in this ongoing series and for this fantastic example of Pentaxian pet photography. 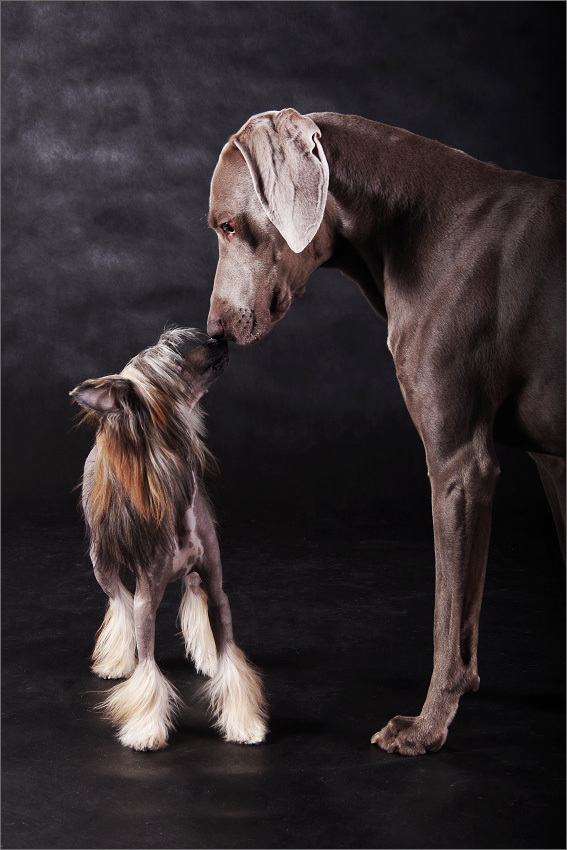 This photo was taken at my small mobile studio in Togliatti, Russia.

Editor's Note: Oleg has a mobile studio for his photography. He takes it to a client site and unpacks it for photo shoots. The studio is an unrolling backdrop with three Visico VT-300 lights. Oleg's mobile studio allows him to go to his clients and, as long as they have a power socket, take photos in a manner that is convenient for them. It unpacks in about 15 minutes and fits in a four-meter-by-five-meter (13-foot-by-16-foot) area. Compacted, his studio rolls into a single bag and weighs around 30 kilograms (66 pounds). This is a creative approach to providing clients with great service.

What inspired you to take this photo? Did you plan your shoot ahead of time?

It was a spontaneous shot taken during a break between shooting the two dogs. It was not planned. I didn't even have time to re-adjust lighting equipment.

This shot was the primary unexpected event that day. In general, shooting dogs is very exciting. The advantage of such shooting that lighting set up for a dog is much simpler than for a human. But there is also a disadvantage: the handler has to stand in relation to light sources so that there are no unwanted shadows or color toning in the image. Almost no dog will quietly pose for shots without their handler's assistance.

What camera and lens did you use? Did you use any accessories (tripods, lighting, etc)?

I used a Pentax K-30 with DA 18-135, two stands for the roll-out black background (2.5 meters wide), three 300-joule monolights with radio triggers and flashtraps on stands, one strip box, one white reflecting umbrella, and one honeycomb attachment with blinds. I ran a moist cloth to remove hair from the background. And then there was me, of course!

Do you shoot RAW or JPEG?

This was shoot in JPEG. I almost never shoot in RAW; only if the customer orders photos for printing in a large format. Ninety-nine percent of my customers do not; they use their pictures on the web. Settings on my camera were manual mode, 1/160s exposure, F8, 53mm focal length, ISO 100, and flash white balance.

Editor's Note: Oleg edited the photo using a combination of GIMP and XnView.

I cropped some, adjusted the brightness and contrast, reduced saturation, and added a bit more sharpness.

I don't have my own website and mainly I post my photos on Russian photo sites (club.photo.ru, photosight.ru, and samara-photo.ru), but Pentax Forums contains a lot of my pictures in the Post Your Photos section.