Glow in the Winter Sky 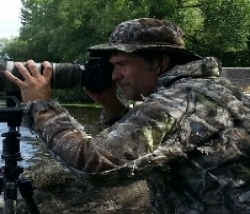 Weevil submitted a particularly fantastic winter image in the December 14 to December 27 Picture of the Week thread. We appreciate Sylvain's interest in being our second featured forum photographer in this series. Here is Sylvain Côté's photo Glow in the Winter Sky. 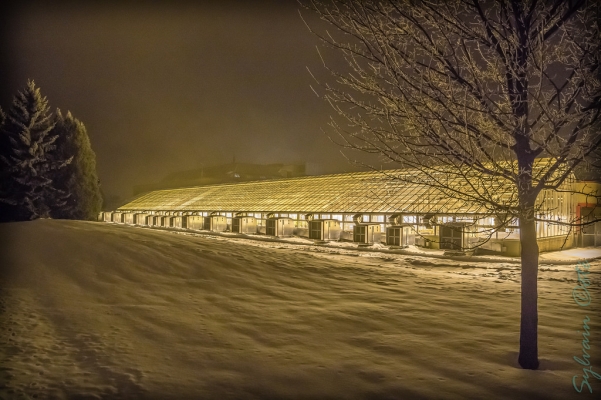 Tell us about the Capture

This photo was taken at the Horticulture R&D Center in St-Jean-sur-Richelieu, Québec (Canada).

The huge glow in the sky that I noticed when I was close to the site. Since it was a foggy evening, the light was reflecting all around.

Not at all! I was coming back from an outdoor photo session, where I was trying to photograph ducks near the Richelieu River, but the light was pretty dull with the fog building in at the end of the day. So I didn't have much success. When I arrived at home (I live near the Research Center), I saw a kind of huge yellowish glow in the sky because of the fog. I did a quick detour to see what was that. There is a football field behind a college just nearby the research center, so I was wondering if there was some activity (which I doubt). When I arrived on the spot, I saw that the glow was coming from the greenhouses attached to the research center. I couldn't resist to capture that moment.

I removed camera body from the long lens I was using earlier and put the DA* 16-50m f/2.8 on it. The research center has a frost fence all around, but fortunately, there were big snow banks just by the fence (because there is a parking lot just on the other side). I scaled the snow banks so I could have a better perspective.

It was pretty cold outside (-10° Celsius), and I had to scale the snowbanks. I did that pretty quick and I forgot to put on gloves. Since it was handheld, on some shots (including this one) I used the frost fence (with barbed wire) for stabilizing my camera, trying at the same time not to scratch my clothes or gear on this barbed wire. I have to say that the frost fence was indeed "frosting" my hands... I took maybe 15 shots at different angles, trying to get that fence out of the way, and this photo was one when I supported my camera on the fence between two barbed wires.

What Pentax equipment did you use?

Did you use any non-Pentax gear (tripods, lighting, etc)?

Tell us a bit about your workflow

Do you shoot raw or jpeg? If the latter, what settings do you use?

I always shoot in RAW (DNG), and import in Lightroom 5 for PP.

The photo was too dark, underexposed (settings: 1/40s, f/6.3, 1600 ISO @16mm), but since I shot in RAW, I was able to raise the exposure by a couple of stops. Actually, it's the Lr5 Auto Tone feature that did it first by raising the exposure by 2.5 stops. Then I adjusted the settings manually, where I lowered it a bit to 2 stops. I also lowered the highlights and raised the shadows to their maximum. I tweaked the black and white clippings a bit, added some clarity and vibrance, and lowered a bit the saturation. I also added a bit of sharpening and noise reduction. Finally, I added, as I always do on most of my photos, a little post-crop vignetting.

On the first variant of this photo, it came out with a pretty warm in WB (too yellowish). Since I am colorblind I wasn't too aware of that. My girlfriend that told me it looked a bit "weird"... too yellow/green. So I decided to tweak the WB to make it colder... I published that colder version on my flickr photostream, and by surprise, this photo with "colder" WB, was selected on the Flickr "Explore page" (flickr selects 500 pics per day to appear on this page), see the image here. However, my first attempt to adjust the WB was too cold to my taste, because the greenhouses lights are really "yellowish", so the photo you refer here represents more the reality of the lighting that I saw that night: the WB temp change was from 2750 to 2500.

Tell us a bit about you

How long have you been a photographer/photographing things?

I always like to photograph things. I acquired my first camera, a Canon S3 IS bridge, in 2008 if I recall well. In 2012, I decided to get a DSLR, and acquired a used Pentax K20D and a Sigma 120-400mm. That is when I started serious photography, my goal being to do nature photography, especially birds. Since then, I have upgraded to a K-5 and K-3, bought many nice lenses, and gave my K20D and a couple of lenses to my daughter as a Christmas present. My next goal would be to do macro/microphotography of small critters, especially insects, in studio and in the field. One of my idol in that matter being Thomas Shahan.

article, monthly, photography, spotlight, tell us about your photo, weevil