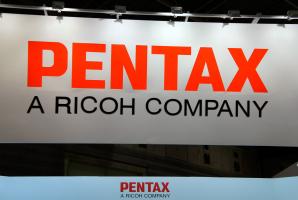 We're happy to finally bring you our interview with Pentax at this year's CP+ show.  See the video below:

Read on for the full interview transcript:

Do you have any updates about the Pentax full-frame DSLR since Photokina? Are you able to officially confirm that such a product will be released in the future?

In regard to full-frame cameras, at this point, as of Photokina, to be honest, even I hada time when I was wondering whether we should make full-frame cameras or not, but right now I know that we have to make them. Even within the company, there are a lot of opinions on this issue, such as the opinion that we shouldn’t make them, but right now within the company there are many people who are positive about the idea of us making full-frame cameras. Since Photokina, development of the component technology is advancing and we can say that we are quite positive about developing it as well.

You once mentioned that a full-frame Pentax would need to have a unique selling point in order to be marketed. Would you consider in-camera stabilization or a small form factor to be a unique feature in a full-frame DSLR?

The new MX-1 appears to be the first "enthusiast" compact from Pentax. The camera has not been released yet, but it's already been attracting tremendous amounts of attention thanks to its looks. What else makes it unique?

Well, I think the design is one of the most unique aspects of it, but it’s not only the retro appearance of the camera, but also the fact that it is made of brass is something that has never been done before.

Would you ever consider making a retro-styled DSLR or a simple "student" DSLR that mimics the K1000?

Well, from several years ago we’ve had that idea but as of now we will answer that we have no plans to do it.

The announced AF360FGZ II flash has the addition of swiveling capabilities, what else has been redesigned or improved in this flash? Is the unit weather-sealed? Has the battery door been redesigned compared to the previous model?

We can say that we wish to deliver the functionality and hardware people will look forward to, but right now I cannot give you any details on it. We can't talk about it right now, please wait until a later date.

Many Pentax users have been asking for a wider range of flash-related features. What future plans do you have for improving the Pentax flash system in general?

Well, we are considering that right now.

There is a flash-related bug in the Pentax K-7, K-5, K-5 II, K-5 IIs and K-30 DSLR cameras. When a flash is used in bounce mode (tilted up), many users have noticed consistent overexposer by the P-TTL system. Are you aware of this issue and can it be fixed throuh a firmware update?

We understand that we are getting those opinions, and our engineers are aware of them. However, trying simply to resolve such issues could lead to other issues and therefore we are in the middle of discussions as to how we proceed.

The new SAFOX X autofocus system has improved low-light performance. It rivals some of the most advanced AF systems on the market today in terms of low-light accuracy. However, it still needs improvement in terms of continuous tracking mode. Is this an area that you're looking to refine in the next advanced Pentax DSLR?

In regard to the autofocus of the K-5 II, we developed it aiming to be number one in high sensitivity, but right now in the development team we are looking to become number one in autofocus.

Has the K-01 been discontinued?

Well, we haven’t completely discontinued it.

We haven't seen much about the Ricoh GXR or GR at the show. In what direction will you be going with these cameras in the future?

Well, this time we have no new Ricoh models. But we did prepare a sign at the booth that says that we will sell something in 2013. We cannot say what it will be right now, but we would like Ricoh fans to look forward to it.

The Pentax K-mount adapter is absolutely brilliant because of the leaf shutter and solid build quality. However, it does not come with a tripod foot, which is a must for many. Will this part go on sale separately?

Right now the tripod attached to such products as the 300mm DA-Star is being sold separately. We worried about whether or not we should include them together, but it would overlap with those who already have the DA-Star 300mm lens, so we decided to sell them separately.

Have you considered adding in-camera Wi-Fi or built-in GPS to any future DSLR?

In regard to the Wi-Fi and GPS, they’re becoming popular functions and whether to make them a built-in function or an option is something that we cannot say right now, but we are thinking of addressing this.

Another feature which users have been suggesting for a while is a fully articulating LCD screen, yet we haven't seen one on any Pentax camera to date. Is there a reason that such a screen has not been introduced on any model yet?

Adding an articulating LCD screen to the camera will be a disadvantage when developing a small form factor camera. Therefore we have not dealt with this until now, and right now we are considering what to do from now on.

Are there any plans to bring back official tethering support to cameras other than the Pentax 645D?

As of now we don’t have many requests, but if demand for models other than the 645D increase, we will consider it.

Would you be willing to work with third-party developers to create such applications and make Pentax cameras compatible with existing software?

We had that sort of idea. We have thought that disclosing these sorts of commands to third party developers who make applications would be a merit to users, but we think that as of now technical support would be difficult. But that does not mean that we are giving up.

There is currently a large gap between the video capabilities of the K-01, K-30, K-5II and K-5IIs. It would be great to have a product which would have the best of each camera in a single design. What are your future goals as far as video goes?

Increasing video capabilities depends on the hardware so as of now, I think increasing the efficiency of the video is difficult. In the end, Full HD H.264 format movie adoption as well as external microphones, and other such functions will become necessary for more advanced cameras. In regard to lower grade cameras, the usage will be examined based on each respective concept.

The Pentax 645D has been on the market for almost three years now. There have been many improvements to the 645 lens lineup such at the 25mm wide-angle or the 90mm macro.What are your long-term plans as far as the body itself goes?

In regard to the 645D, our customers are very satisfied with it and we have not had many requests on improvement, but we have many new ideas which we are considering for the next model.

At Photokina you said that you would address the lack of Pentax presence in certain countries. What is being done or what will be done to improve the worldwide availability of Pentax products and access to support?

In regards to the regions in which the cameras are being sold, Pentax Ricoh Imaging is reviewing it. For example, as a new plan we might have a distributor or partner up with someone. Also, we are thinking of making good use of the traditional Ricoh sales channel.

It can't help but to be noticed that a true entry-level DSLR has not been available from Pentax for over a year now since the discontinuation of the K-r. Are there any plans to bring back such a camera or do you see the K-30 as something that fills this role?

In regard to the K-30, we developed it is as a mid-range model, so it does not make up for the entry level. I think that entry-level cameras are important to us. We wish to eventually fill this gap.

Many Pentax fans are looking forward to the SDM teleconverter and the DA* zoom lens that's currently on the roadmap. Can you comment on either of these products?

I’m sorry, I cannot comment on it until we make an official announcement.

Do you have any final words for the Pentax community?

From now on Pentax Ricoh Imaging will, well the Pentax brand and Ricoh brand, will want to put out unique and interesting cameras that excite people such as compact cameras, Q-mount, K-mount, and 645, so please look forward to that.

As part of Pentax Ricoh Imaging the incredible enjoyment and the persistence that you can’t have with another maker is something that we want to communicate to you fans. And we also have plans to put out more exciting products, so please look forward to it.

We will be posting commentary about the interview and closing remarks about the show shortly, so please stay tuned for that!