The two new full-frame-ready Pentax 70-200mm and 150-450mm telephoto zooms were on display at CP+, and we had the opportunity to handle the lenses and test them on a Pentax K-3.  The lenses are built like tanks and certainly feel like professional pieces of equipment— more so than existing star lenses.  Their autofocus speed also seemed noticeably superior compared to that of the DA* 50-135mm and DA* 60-250mm F4 lenses.  We were told during our interview with Ricoh Imaging representatives that AF optimizations had been made specifically for these two lenses. 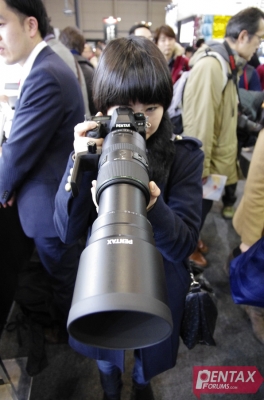 Both lenses are expected to start shipping in March.

Refer to the photos below for additional size comparisons.  These are among the largest zoom lenses ever made by Pentax.

Click on any thumbnail below to enlarge and browse: