With seven of eight lenses in development being full-frame compatible, Ricoh is signaling its continued commitment to modernizing the FA lens lineup.

In comparison to the 2017 roadmap, the D FA★ 50mm F1.4 and D FA★ 85mm F1.4 lenses have been given full marketing names, indicating that they are moving closer to release. Indeed, the 50mm can be expected this spring, the 85mm will likely reach photographers next year.

The "ultra wide-angle single focus lens" and "fish-eye zoom lens" remain listed but without any new detail since their introduction in the 2016 roadmap.

For the full-frame (FA) lens lineup, click on the image below to enlarge or view the roadmap as a high-resolution PDF. 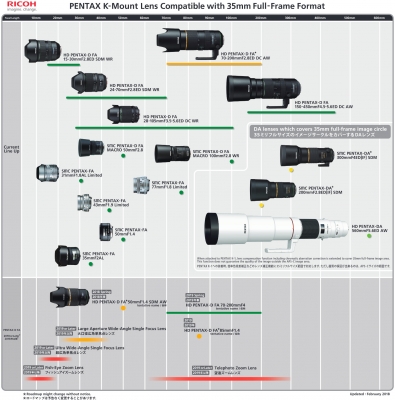 While there is only one APS-C lens listed on the roadmap, it is an important one: the "DA wide zoom" that has been on the roadmap since at at least 2012. The DA★ 11-18mm will join the DA★ 16-50 and DA★ 50-135 to offer a full complement of durable, weather sealed, F2.8 zooms for the Pentax DA system. Ricoh anticipates releasing the DA★ 11-18mm this Spring.

For the full APS-C (DA and FA) lens lineup, click on the image below to enlarge or view the roadmap as a high-resolution PDF. 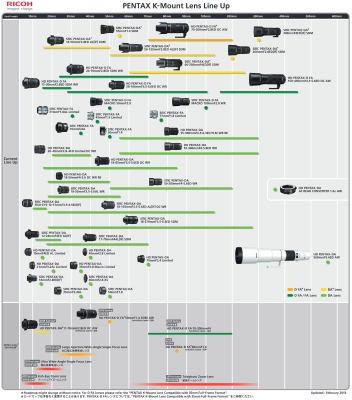 Pentax regularly announces and previews future products at the CP+ camera & photo imaging show, and we expect 2018 will be no different. This year's exhibit will be hosted from Thursday, March 1, through Sunday, March 4, and we will provide you with updates when we have them.