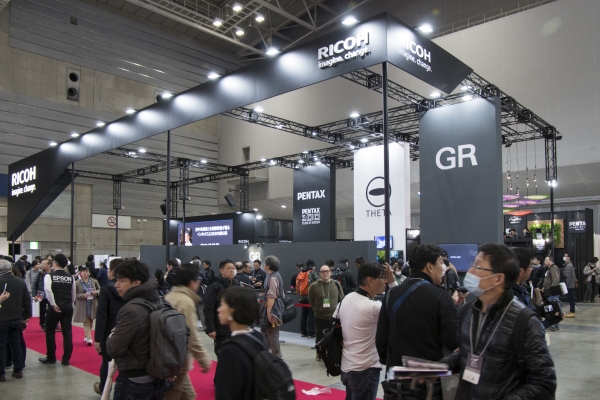 Welcome to our tour of the Pentax / Ricoh booth at CP+ 2019!  What better way is there to recreate the full experience than an interactive 360-degree video in 4K?  Use click and drag anywhere on the video below to pan and take a look around the booth:

The clip above was shot with the Theta V.

If you prefer stills, simply click on any thumbnail below to enlarge and browse.

The Pentax / Ricoh booth was broken down into three main areas: one for the GR, one for the Theta, and one for Pentax DSLRs and lenses.  In addition, there was a stage, printed photo gallery, and various smaller exhibits showing off Pentax and Ricoh technology.

The Ricoh GR III is the latest in Ricoh's acclaimed lineup of high-performance pocketable cameras.  The new model will start shipping later this month and was available for testing at the show.

A new waterproof model, the WG-6, was announced just prior to CP+.  At the show, it was accompanied by the entry-level WG-60.

The Theta Z1, which features dual 1" sensors and stabilized 4K 360-degree video, represents a chapter in Ricoh's innovation within the spherical camera market.  The Z1 was on display alongside the Theta V.

A prototype of the upcoming D FA* 85mm F1.4 lens was on display at the show, alongside a celebratory "KP Custom" concept which may be released to customers in the future.  In addition, the full lineup of Pentax DSLRs and lenses was on display together with a roadmap of what's next.

Our Pentax interview is now in the final stages of preparation and will be posted in the coming days, in both video and text form.  Stay tuned!