Christmas is coming up soon, and so every week we're starting to see new deals on Pentax gear!

This week's featured deal is the Rokinon 85mm F1.4, which can be had for just $239 from B&H photo (this is an exclusive deal not featured by any other site).  Given its bargain price, this lens actually delivers really impressive image quality and build quality.  Sigma's 85mm costs nearly 4 times more, and it's certainly not even twice as good, as we discovered in our in-depth review of the Rokinon 85mm F1.4. 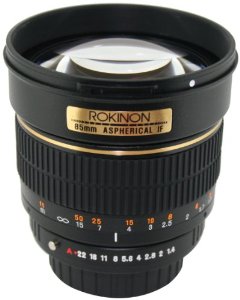 Please note that this lens is also sold under the Vivitar, Samyang, and Bower brands, but the four versions are identical in terms of features and optics.  If you want to learn more about it, check our our user reviews!  This lens makes for a great gift idea because of its cost-effectiveness.

Next up is the Pentax K-5, which has dropped to $749 (same price as on Black Friday).  Stock has almost run out at Adorama: the camera will be gone for good before the end of the year.

Now at less than half its original price, the K-5 is an absolute steal.  It's still best-in-class when it comes to image quality, and it's packed with features to make any enthusiast happy!  To learn more about the K-5, read our K-5 review or K-5 vs Canon 7D comparative review.  But what about the Pentax K-5 II?  Well, it's so similar to the original K-5 that for most users, the extra $450 that it costs would be better spent on lenses.  If you do want a full comparison, however, read our Pentax K-5 II/IIs review.

The deals don't stop here, though: read on for more!

The remainder of the new and hot deals that we found are summarized in the table below:

Don't forget that last week's deals, except for the Sigma 30mm one, are all still valid: you can save big on Pentax lenses through "hidden" prices which are only shown once you add the item to your shopping cart.  The most recent lens deals are found here, and even more deals from 2 weeks ago are still live.

Lastly, we'd like to mention that the Pentax K-01 is still heavily discounted, both as a body-only and with the 40mm lens: