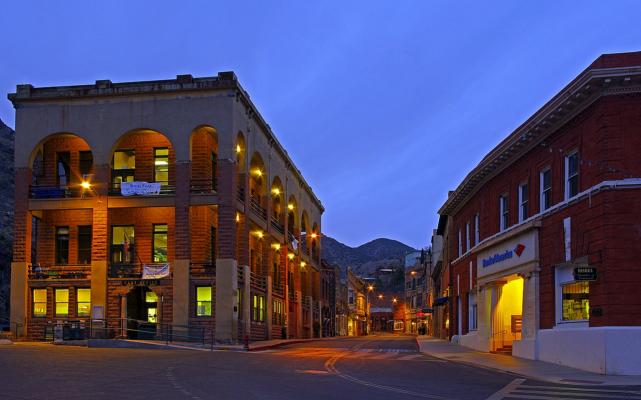 Bisbee is an old mining town in southern Arizona.  In its heyday around the turn of the 20th Century, it was a thriving metropolis.  A large percentage of the nation's copper came from the mines here.  My maternal grandfather worked in those mines, and he and my grandmother are buried in the old cemetery just east of the town.  Over the years, many photographs had been taken by others from this vantage point looking up Main Street to the west.  Amazingly, photos taken 100 years ago and those taken today are strikingly similar, as the old buildings still stand.  The mines petered out in the 1970s, and were abandoned as too expensive to operate.  Bisbee became a tourist destination, but the ghosts of the past still linger on its streets and in its buildings, both literally and figuratively.  Many supernatural sightings have taken place, and books and TV shows have been produced on the various phenomena.

On a visit to this historic old town in February of 2011, I endeavored to capture the essence of Bisbee's history by taking a picture of the old Main Street right at twilight when the sun had set and the lights had just been turned on.  I set up my Manfrotto 055XPROB tripod, knowing that I would have to make a time exposure.  I took dozens of shots, waiting for a lack of traffic and people, so that the focus would be on the old buildings.  I thought the twilight hour would give more of a sense of the city's rich past.  I finally got one shot that I thought I could use, with no cars and very few people in it.  I used a Pentax K-5, set on manual.  I used auto white balance, set it at f/8, manually focused on the back vertical line of the old post office on the left, and leveled the camera with its built-in level indicator.  The lens was the Pentax 18-55mm WR set at  18mm.  The ISO was set at 100, and I varied the exposure time by referring to the K-5's plus or minus indicators for the best results.  This particular shot was a two-second time exposure.  I shot in .jpg format, as I had not yet learned the tricks of shooting in RAW.  Had I to do it over, I would have used the increased color spectrum range offered by RAW.

The original picture direct from the camera is shown below, untouched except for reduction in size for this forum. The picture at the top of the post is the revised photo following post processing. Click the images to enlarge. 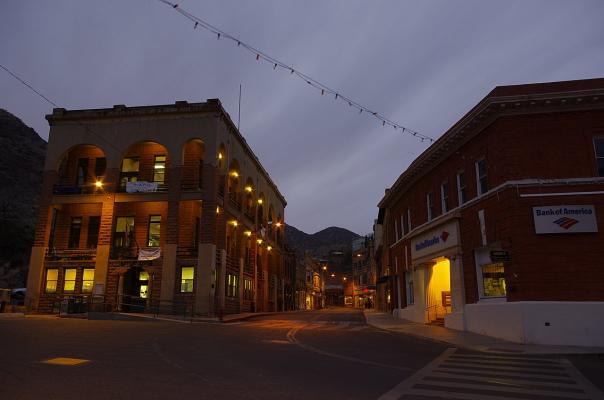 I went to considerable effort to artistically modify the picture in Photoshop Elements 10.  I first largely eliminated the "keystone" effect, and then increased the lighting and saturation to bring out the sky and the lights of the buildings and street and to make a more dramatic presentation.  Using the retouch tools, I eliminated the overhead wires and an antenna on the post office, which I considered distracting.  I also cropped the picture and removed some of the bank sign on the right.  An annoying diamond-shaped utility cover was removed from the foreground.  I slightly sharpened the image to make it more crisp.

I think the results captured the feeling of the old town, giving a glimpse into its wonderful past.  All the buildings shown have been in place for over 100 years.  It's the town in which my mother was born and in which my grandparents lived and worked. Were there not some modern signage, which was unavoidable, the picture might have been taken a century ago and looked much the same.  I love Bisbee, and I hope it shows in this photographic creation.

Shooting a Kangaroo with the K20D