Back in 1986, back when we used film and called it ASA not ISO, I volunteered at a small, rural preschool in St. Vincent, in the Caribbean. I was 21, and I lived in a small cement brick house with a corrugated tin roof, the tropical rain a cacophony with strangely comforting rhythms. With me was the classic, obligatory Pentax K1000, and a Pentax K 55 1.8 lens. I had some lens cleaning tissue, but that was it. I was young, I had very little money - my camera was a cherised possession that often didn't seem that inanimate.

It was a poor community, and my Pentax and the 5 rolls of tri-X I had with me stayed in an old pot in a cupboard. The lid came off towards the end of my 8-month posting. Like on this day back in ‘86, at the pre-school. The young girl’s name was Kenisha, caught here in the cement-reflected light of the tiny school. 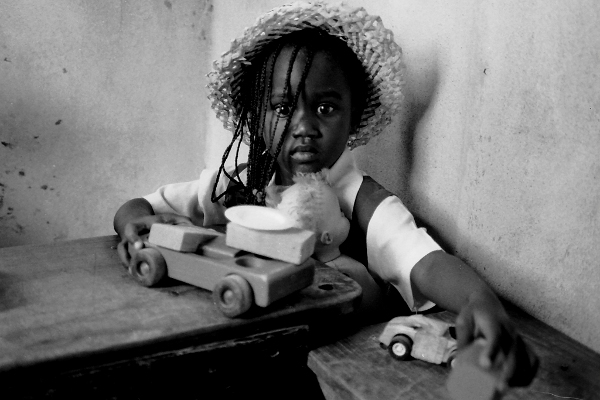 I took the shot with the 55mm lens, the only one I had with me. It was 400 ASA Kodak tri-x that I developed myself when I got back to Canada. It was all natural light, and in fact the preschool didn’t have electricity.

I kept the shuttered windows open in the day, and I like the light it produced, especially as it bounced off the walls. I used no flash or reflector, and the shot was hand-held. The main light of the window, and the softer reflected fill light gave a natural 3-point lighting setup.

Post-processing? Developed in my father’s dusty darkroom. I don’t recall doing any dodging and burning. Both my father and that darkroom are long gone, but it was a skill I picked up early and kept until my 30s.

Why did I pick this photo? I love the feel of it, the intensity of the young girl, the idealistic hope I had back then. I'm more cynical now, but have worked my entire adult life in the non-profit field (and so still don't have much money!).

And the photo reminded me what I love about photography. Was it Dorothea Lange who said that “a camera is a tool that teaches you how to see without a camera?” Exactly.

I didn’t take a lot of photos when I was volunteering abroad (first in the Caribbean, and later in Thailand). A camera always went with me, but it didn’t always see the light of day. The SLR came out when I felt accepted in my newfound home, when I could feel the heartbeat of the community. As much as I like street photography, I’ve never been that comfortable taking photos of strangers (I doubt I'm alone on that score).

And, the other reason I’ve thought of this photo? After 26 years, the little girl in this photo found me on facebook, and the now 29-year-old and me (the definitely not 29-year-old) talked by Skype. She is now a teacher in the community, and the preschool, amazingly to me, is still going. And Kenisha, that hopeful, intense little girl, is doing a degree by distance education.

My old camera saw something after all.  And that’s why I keep it, and use it, and will pass it on to my son. And because it’s a K1000, it’ll probably still work.