A series of fortunate occurrences lead to this photo which I absolutely love. This is how it all happened... 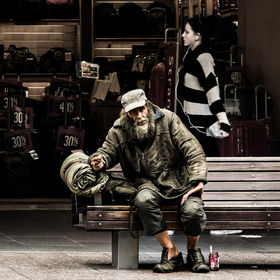 My girlfriend and I were sitting in an alleyway in town (Auckland City, New Zealand) and having lunch on one of the benches. It was a gloomy day, people rushing past, nothing incredibly interesting happening. I recently got my first DSLR (Pentax K-30) and my girlfriend loves photography but doesn't own a camera so she was playing around with my new toy, pointing it at things she found interesting and enjoying the zoom range of the Pentax 18-135 WR lens. Across the street from us, sitting on a bench, just as we were, was a homeless man we have seen several times before. My girlfriend spotted him through the viewfinder and started snapping some shots of him thinking he would make a good subject. Seeing we were so far away on the other side of a busy street he was completely oblivious to it all. After she was done with the camera, I too wanted to take a photo of him. I checked some of the settings, pointed my camera in his direction, raised it and put my eye to the viewfinder. I scanned the scene quickly until I found him- he was staring right at me. I think my girlfriend pointing the camera at him for several shots managed to attract his attention and he got interested by the time it was 'my turn'. I was so surprised when his gaze met mine. Without much thinking (for which I am glad) I pressed the shutter release and captured the photo. In the next photo I captured, he was already facing away.

When I pressed the photo review button, I was amazed at how beautiful the photo was. The man was looking so natural, he stared right through the lens, a penetrating stare that can really stimulate emotion in any observer. The girl behind him, listening to her iPod, walking right past him with her chin held high. The shop in the background, with 'discount' signs. What a contrast between our materialistic world, a world where we acquire possessions, the latest and the best, and the world of this man. He lives through  each day as it comes, he is on the street without a home, with no plans for his distant future. He is not even begging for money, he just sits there. I see him quite often now as I look for him. I didn't use to be so sensitive to his presence. Very often he is talking to himself, he is judged and looked down upon by people walking past. I can't seem to get him out of my head. I love everything about this photo down to the fine details like the ring on his finger which is probably one of his only valuable possessions. I now think about him, and wonder about his story, who he is, and whether he is important to anyone else.

After fixing the optical artifacts in DXO Optics Pro, I cropped the image to my liking as well as straightened it to make the man the main subject of the image. I began by changing the temperature, pushing the slider towards the yellows to set the mood I was after. It was quite a grey gloomy day and originally it felt a bit dull. I also gave the photo a slight tint towards the pink side. I lowered exposure a somewhat to eliminate some burning in parts, I noticed I gained more detail that way without compensating much on other areas. I pushed contrast up as well as recovered some of the highlights. I pushed shadows WAY down to keep this more dramatic look. I pushed whites up a little. Then, I increased clarity to almost full capacity. I also decreased vibrance and saturation a bit until I got the mood and look I wanted.

I did want to separate the subject of this photo from the background without eliminating it altogether so I used the adjustment brush to modify the background separately to the foreground; I reduced the saturation in the background. Notice the drastic change between the tones on the man's head and shoulders compared with the shop and the girl behind him. I feathered the change in the foreground because I didn't want to isolate him from the bench completely or from where he was sitting.

The original image (straightened and cropped- I changed the crop later in the final image):

There are two main reasons why this photo is important to me. For one, I really like the result, and I think it's one of, if not my best photo. But more importantly, I was really saddened by the thought that no-one thinks of this man beyond the few seconds they see him as they quickly walk past. I admit that until I saw him stare me in the eye, I too didn't give him a second glance or think about him beyond our short encounters in the street. It's not that I don't care, I just never really stopped to think about it. I do want him to have someone who thinks about him, even though he may never know. I have since printed and framed this shot, a small 5" x 7" print put in an old wooden frame, to sit on my study desk in my room. It may be of a tiny significance to anyone, but it was quite important to me.

I really hope you liked the shot and the story behind it and that you enjoyed my explanation of the processing. It would make me very happy if you found this photo as moving as I have. On a slight side-note, thank you to the Pentaxians who commented on the post of this photo in the "post your photos" section. Your warm comments motivated me to submit this shot, and I found your attitude very welcoming into the Forum.

The Matterhorn from Chamonix