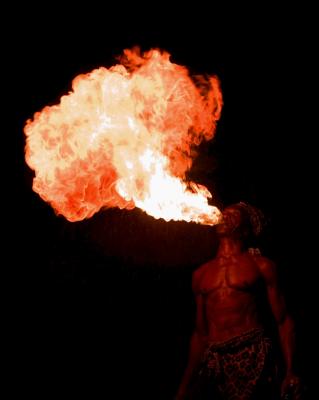 I chose this photo for my submission because it was one of the first pictures I took that I was particularly proud of. I'm normally pretty timid about taking photos in public but this performer was so fantastic that I wanted to capture the moment as best as I could. This picture was taken at a yearly event that showcases the diversity of the different cultures in the city. The photo was taken at the Caribbean pavilion at this event and the performer, named Prince Niah, was a contortionist/fire breather (obviously). I only had a few chances to get a nice plume of flame and I'm very very pleased with how this turned out.

Here's the "vital info" from this picture:

To get this particular shot I was shooting in aperture priority. I know this lens can be weak when it's wide open so I started at f/7.1. I watched the meter as he exhaled flame and the auto exposure would go all over the place. After a few test shots with decent flame, I felt it was a bit too dark so I nudged the exposure up and the shots were either too grainy or too blurry. I brought the aperture down to a stop above wide open and set the ISO to 320. The photos were still a touch dark, so I increased the EV to +0.07. On his next breath I got the above shutter speed and was able to capture the photo I wanted. As you can see from the original photo version the final version the post-processing on this photo was extremely basic. I used Pentax Digital Camera Utility 4 to reduce the exposure half an EV (to give the flame some depth) and to develop the RAW to a JPEG. I then used GIMP to crop the photo and black out the background. 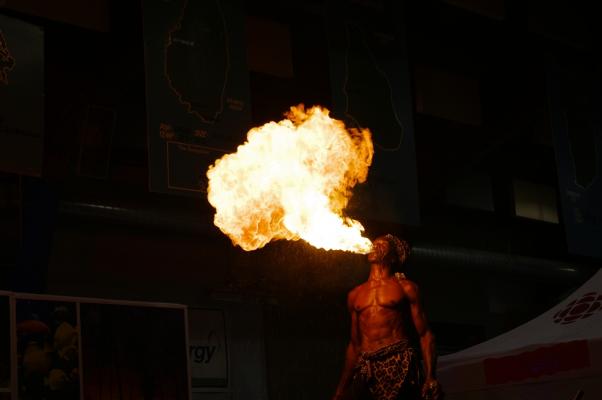 I'm especially pleased with this photo because it turned out well but didn't require any fancy equipment or heavy post processing. It turned out to be a great photo because I had a great subject and extremely good luck - which is really what photography should be all about.

Please let me know in the comments if you've got any questions! Thanks for reading!

The Making of Flamingo Paradise