There are a lot of reasons why this is one of my favorite pictures. I've always been inspired by a lot of beautiful pictures I've seen of the milky way and wanted to capture it myself. "Galaxy Road" was taken in August when I made my first trip out to truly dark skies to observe and photograph the stars. This state park took about 3 hours to drive to from the Chicago area. The drive was well worth it as I could see thousands of stars, dark clouds and nebula in the milky way, and a couple dozen meteors. The beautiful night sky is always up there, I just think it's a shame that the light pollution from cities blocks out so much of it. 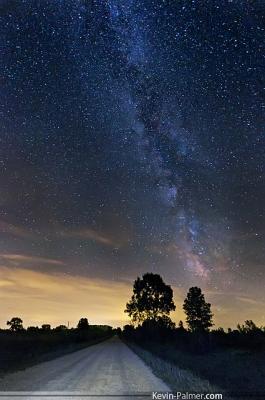 The first thing you'll notice about the unprocessed photo is that the road is blue. This is because I used a blue led flashlight to light up the road. To get rid of the color cast, I used selective color. There are several techniques to bring out the contrast in the sky. First I used the curves tool to create somewhat of an 'S' curve over the histogram. Next I brightened the image using levels, then increased the contrast to 100. After adding a little fill light to the foreground, I cloned out a couple lights which seemed distracting. Lastly I sharpened it and removed some noise. 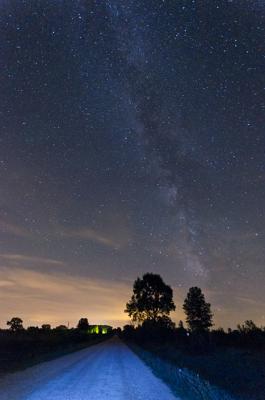 Since the milky way covers so much of the sky, the wider (and faster) the lens is, the better. Since you need to use high ISO's, a recent camera sensor with lower noise is also ideal. Besides getting to the darkest skies you can, it's also good to know where the milky way is at different times of the year. It's not really visible in the winter, and best viewed in the early summer.