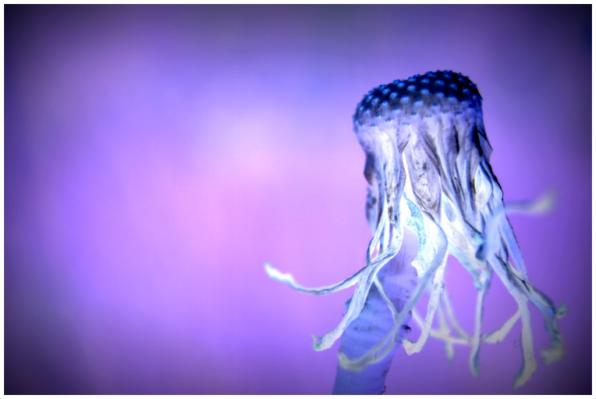 I chose this photo to share because it is a personal favorite of my own work.  I'm a novice enthusiast. My Pentax K-r is my first DSLR and for that matter my first SLR - I had always used point and shoot cameras prior to owning it.  I've come to the PentaxForums.com for information and the camaraderie and support - what a great bunch here.  I made the shot I'm sharing while participating in May 2012 "Single In" Challenge - Truly one of the hardest working groups on the forum if I might say so myself.  I used accessories, a creative eye, and some rudimentary photo editing.

This is also a favorite photo for me because it has the appearance of a jelly fish that might be found in the Pacific Ocean near where I grew up.  It is a reminder from home that I created in my front yard.

Now on to how I made the shot.

All processing was performed in Picasa 3 The "straight out of camera" photo was quite boring, but I saw some promise in how the sepals had dried and splayed out almost like tentacles.

I had been scanning a quantity of 35mm negatives the previous week and started to see negatives - so for kicks I made the colour negative of the digital frame above, resulting in the image below - still pretty boring, but now exhibiting an ethereal colouration - something out of this world.

I then applied the built in Lomo-ish effect which in essence, saturates, softens, and ads a vignette - this had the wonderful effect of strengthening the interest point, punctuating the ethereal feel, and creating the illusion that the simple dandelion head was something it was not.

The final adjustments to darken up the shadow, and adding a border for printing - because this is one of the few shots I have printed.

The Story of "Clouded Waters"