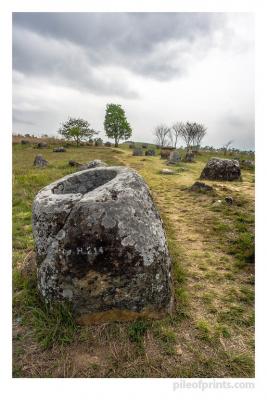 Typically a successful ultra-wide landscape establishes an engaging relationship between a foreground and a background object. Ansel Adams used this technique in many of his most famous photos.

The trick is to clearly define each object and then engagingly establish their visual relationship. In this shot from the Plain of Jars in Laos the main relationship is between the 3D form of the stone jar in front and the more one dimensional shape of the tree at the center of the horizon--the two shapes connected by the zig-zag of a footpath. Only if the entirety of that tree's shape is outlined clearly against the sky does this picture succeed at this. In addition the shapes of the fast moving clouds above the tree reflect back the darkness of the dark stone jar so that the tree stands like some symbol of hope or life at the image's center.

The Plain of Jars is an ancient burial site and a modern battleground in which hundreds of Laotians still die each year. I wanted the image to project the fragility and the importance of life here by showing the outline of that tree between the more ominous shapes of the burial urn and the dark cloud. To this end I've bent my knees down to make sure that the full outline of that tree is visible above the horizon, but straightened up as high as possible to get as much of a look inside the stone jar as possible (to preserve its 3D presence). At the same time I'm bending up and down with the knees I'm shuffling my feet forwards and backwards slightly to make minor adjustments to this connection between the jar and the tree. It would have been impossible for me to take this picture with a tripod. The clouds would have blown away long before I got the camera position I wanted. Some landscapes are also action shots. 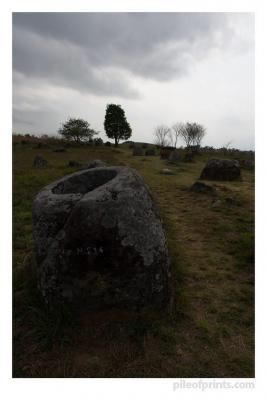 I always shoot RAW files with the camera set to Aperture priority and auto white balance. For a backlit scene like this I set my K-x to almost the maximum auto bracket of 2 stops under and over at ISO 200 with auto white balance. I processed the RAW file in which the land was 1.7 stops underexposed (but with the sky correctly exposed) in Lightroom 4. There is a shadow slider in the basic section and a second one in the tone curves. I pushed both sliders up to about +50. I almost believe that clarity & vibrance can bring back the dead. They are both pushed to +50 to increase mid-tone contrast and increase saturation of the weaker colors, respectively. These setting bring the under-exposed image to life--so much that I have to lower overall saturation a bit.  I also did some touching up in PhotoShop. It is a credit to the K-x and its 12 megabyte Sony sensor that you can get away with pushing the shadows up almost two stops. The exposure is 1/400 at f-11. 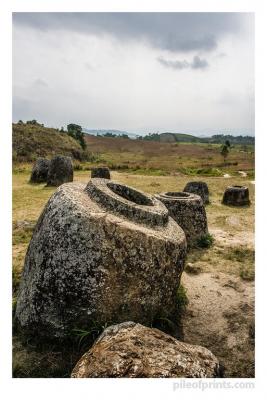 I'm showing a second photo from the Plain of Jars just to explain how proper use of the DA 15 will require that improvements be made to the Pentax line of DSLRs. The relationship I'm establishing in this image is between the opening of the big jar and the similarly shaped cloud at the top. For the small jar in the featured image I could bend my knees and still tower above the jar. This is the biggest jar on the plain. I'm standing on a rock and shooting blind with the camera stretched out high above my head and pointing down. Ansel Adams built a tripod platform atop his station wagon so he could make these kinds of connections with his wide angle lens; all I want is a Pentax DSLR with a flip-out LCD.

If you'd like to see more pictures of the Plain of Jars along with a brief, but chilling explanation of its history see my photo essay:

the Plain of Jars - Pile of Prints -- Brian Thomas

If you would like to find out how I use the DA 15 for my street photography see my Ultra wide DA 15 Limited is a game-changer submission in other the Pentax Forums 2,000,000th post celebration category.

Making of "The Dragonfly"