One of my favorite photos that I have taken, was no accident, it took planning and luck.  Shooting the moon is not only a part of a card game, but something a lot of photographers try, usually to see if they can, often after getting a new camera or lens.  We've all seen these "close up" photos and no matter how sharp and perfectly exposed they may be they are pretty boring.

However, if you use the moon as an element with something else in the photo, it's on.  I love taking photos with a full moon in them, problem is, it only happens 12 or 13 times a year, although you can sometimes get two nights when it's close enough to full.  Then, the moon has to rise when it's dark enough to see it, and it has to be clear enough to see it.  So it takes some planning, but the result can be well worth it. 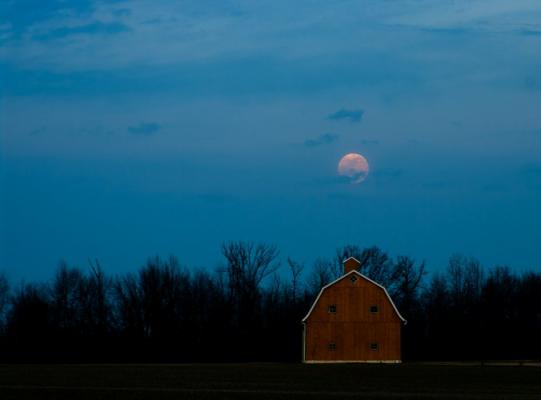 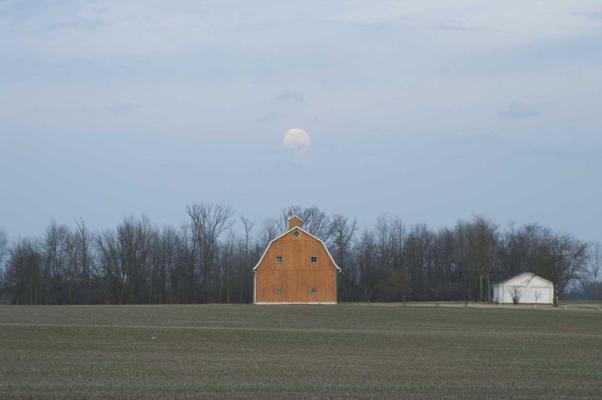 So where do you start?

First find out when the moon is full, going to rise, etc.  There are plenty of web sites with information on the moon phases, I use the US Naval Observatory website for times of moon and sun, rise and set tables.  The site has tables for cities and towns, in the US, and by longitude and latitude for the entire Earth.  Be aware that the charts are in standard time, so if you are in daylight savings time you have to compensate.  Using the charts I knew on this night that the moon would rise 26 minutes before the sun set, this was a good thing. I know from previous attempts that the best way to make the moon look big is by using a telephoto lens.  On this particular shot I did not use a tripod and was lucky to get a good steady shot.  I used a Tamron 28-105 on my K20D.  I probably could have got a bigger moon with the 55-300.

Then the hard part comes, what is the foreground, I live in a rather flat area, so it probably will be a man made structure.  I decide this night to go to the Fort Amanda area.  Fort Amanda is a memorial for a War of 1812 fort, there is a 40 foot obelisk on the site that is somewhat in the open with no large trees close.  So I drove out there maybe a half an hour before the moonrise to scout it out.  About a half mile south of the obelisk I saw this barn and decided I would try it first.

Then it’s a guess as to where you will see the moon rise, I know it will rise in the East, not sure how much Northeast or Southeast, and the road is a little curvy, not straight North and South.  So I waited along the road in my car and set the camera.  Because of the overlap in moonrise and sunset, the moon became visible when it was already higher than the barn.  I was several hundred yards from the barn, it was actually on a side road, so to get the moon positioned where I wanted it I drove down the road a little, I took some photos with the moon in different positions, then took a couple with the moon directly over the cupola.

The barn looks illuminated because it is, by the last rays of the sun behind me.  I composed the photo with the barn in the middle, I knew I would be cropping the right side to remove another building, and the 105 was not quite long enough.  After this I drove up the road to the obelisk and took a few photos of it.  When I looked at the photos the one with the moon over the cupola stood out.  I cropped it and did a little post production.

I entered the photo at our county fair in the “Harvest Moon” category and it won first place, I also entered it in the local newspaper’s annual photo contest and it won first place in the landscape category.  So to make this photo, I used my photography skills (not the best but greatly accelerated and enhanced by using Pentax Forums); my past experience, research, and of course luck in getting the right weather.

Making of The Whistlers Mountain