The small village of Loissin near Greifswald (Germany) is well known by local photographers because of some fallen trees at the beach. Due to that, the spot is a bit over- photographed. I want to share this photo as a example for composition as well as for a technique to reduce the Dynamic Range, called Exposure Blending. 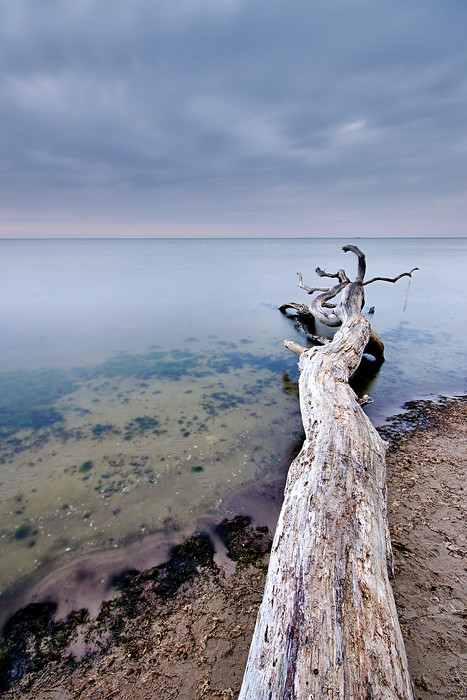 In order to not just re-photograph the scene I decided to experiment with perspective. I finally came up with the idea to step on top of one trunk and make a picture from above. From that point of view I was able to use 3 lines for composing the image, setting the trunk to the right side in order to add a more static feeling. The Electronic level of the K-5 helped a lot while adjusting the camera. For extending the depth of field and increasing the exposure time the lens was stepped down to f/11. It was about 30 minutes after sundown, so I achieved 10 seconds exposure time with ISO 250. This resulted in smooth water and a good exposure for the trunk, but unfortunately a blown out sky. So I shot a second exposure with 2 seconds of exposure time, of course by applying the camera- AEB. 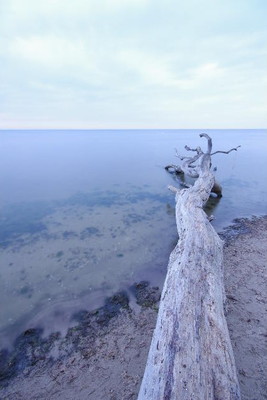 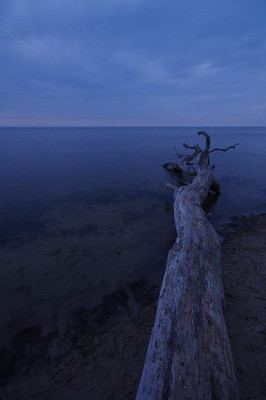 Pictures directly out of camera.

Darktable has been used for processing the DNG Files. The White Balance was increased to about 6200 K, the Blackpoint pulled a little bit in and the dark areas brightened slightly using the color curve module. I used the Velvia module for increasing saturation and the sharpen and high pass filter modules for adding sharpness. After copying the history stack to the darker exposed file, I additionally intensified contrast in the clouds using the equalizer module as well as decreasing the exposure slightly. 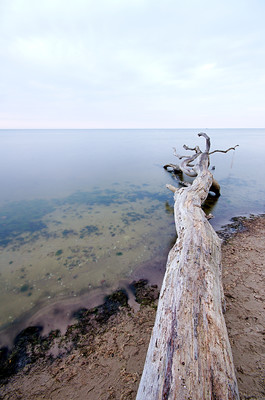 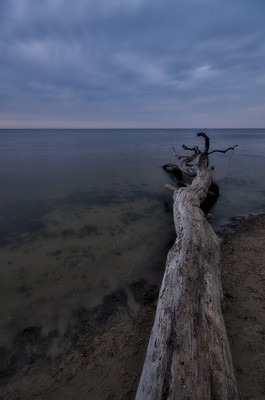 Pictures after RAW- Conversion in darktable. 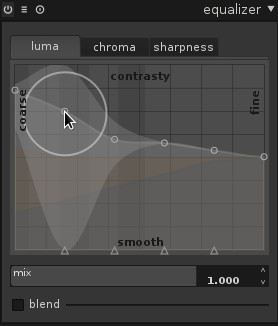 left: settings of the equalizer module in darktable | right: layers and masks in GIMP

After Exporting to JPG I opened both pictures in GIMP, with the dark one on top. I added a white layer mask to the dark one and created a copy of the layer. Using the gradient tool I added a very hard transition to the lower layer and reduced the opacity to about 40%. The upper dark layer got a smooth transition and an opacity of about 70%. I can't remember the exact values, but one has to play and balance until it fits best. After creating a new layer from visible, I added local contrast using the USM tool with radius 500, amount 0.25 and threshold 0. Finally I cropped slightly from the bottom to get the coastline running exactly into the corner of the image.

Be always mindful with your composition and save some pixels!