Making of The Whistlers Mountain 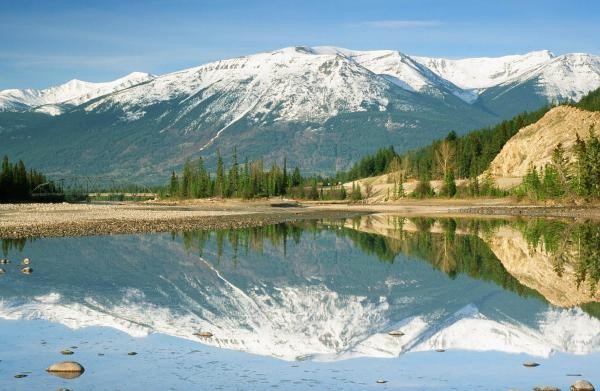 Why I selected this image

This photo is a favorite of everyone who has seen it.  I have several similar incredible images of the Canadian Rockies and I make it a point of going there each Spring and Fall.  Each great image takes a fair bit of work and serendipity plays a major role in everything.  Not only do you have to be there at the right time and place but the lighting, weather and ambient conditions must also be perfect.

This image was taken in Spring, just one day before the weather warmed enough to melt sufficient snow off the mountains of the Rockies and fill up the Athabasca River, which runs past the town of Jasper in Jasper National Park.  I am literally standing at the bottom of the riverbed.  The mountain is called The Whistlers and there was a small reflecting pool that I used for the composition.

You will note that I used a film camera and slide film...

None.  This is the actual image as it came back from the photo lab.  I did ask the lab to also scan it onto a disk when they developed the slides, which they did as jpegs.

I am not a technophobe.  But I do enjoy taking film pictures, especially landscapes.  I've hardly used my dSLR (an old ist-DS) and I haven't upgraded to the more recent dSLR's.  However the technical procedures used will equally apply to digital as well.

1.  Timing.  I needed my watch.  Sunrise was 8:00 am and I had scouted out the location about an hour earlier.  This was Spring and 24 hours later the spot I was standing on (the riverbed) was completely covered in brown runoff to the banks of the river as the weather finally warmed up enough to melt the snow off the mountains.

I am facing West and at 8:00 am the sun rose behind me.  It was a warm, soft light, just perfect and it lit up the foreground nicely.

2.  Exposure & contrast.  I set the camera on spot meter and metered the foreground, midground, top of the mountain and sky.  There was about 6 to 7 stops of difference from the foreground to sky.  I then set my camera on auto-meter exposure, manual focus, and 2 second MLU.

3.  Tripod setup.  The single most important thing about getting a good reflection shot like this one is angle of view.  This is what made the entire image.  The key is to get as low an angle as possible.  I was about 10 meters away from the reflecting pool and had my tripod as low to the ground as possible.

4.  Mounting of accessories & framing the image.

a)  I used a Jobu Double Bubble level.  This is all-metal and almost indestructible.  It fits onto the hotshoe mount of the camera.  I simply can't live without this item for making sure my horizons are straight.  The bubble is highly sensitive and works well even in freezing cold.  I highly recommend it. $35 at B&H or buy directly from Jobu in Canada.

c)  I then framed the image (70mm focal length) and focused.  I didn't worry about shutter speed because I had a tripod.  I set the aperture at F11 to ensure there was sufficient depth of field.

5.  Use of filters.  Yeah, you can reduce the contrast in post-processing.  But I prefer to do it on the camera if possible. The important thing about using split-grad filters is to remember that the background should be a stop darker than the foreground.  That is what we are used to seeing most of the time and if the rocks in the foreground are a lot lighter than the sky, it will ruin the image.

There are at least 6 stops between the foreground and sky.  But remember that Velvia (and digital) can reasonably handle at most 3 stops of latitude (my experience is actually 2 stops).  So I had to add enough filtering to make sure there was only about one stop or less between the foreground and sky.  So this is what I mounted on a Lee filter holder:

a) Lee 0.9 grad soft ND filter (3 stops), pulled down to cover the foreground.  The Lee graduated "soft" filters mean that the transition from clear to 3 stops is very gradual. The midground to foreground was about 2.5 stops difference, so I judged from past experience that this was enough.

b) Lee 0.6 grad hard ND filter (2 stops), pulled down to cover the top 1/3 of the mountain, where there is white snow.  A Lee hard grad filter means the transition from clear to 2 stops is immediate, which is what I wanted as only the white mountains and light sky had to be covered.

c) Lee Sky Blue 3 filter, pulled down to just cover the sky.  This is to make the sky more blue.  You will notice that it had [I][U]no effect[/U][/I] on the white clouds in the final image.  I knew this from experience and didn't worry about the clouds getting any funny color casts.

6.  Pressing the shutter.  Final result is there is 1 stop difference in exposure between the darkest part of the foreground and the white clouds in sky.

The light only lasts a couple of minutes before it turns hard and unpleasant.  So everything had to be done quickly with as much set up beforehand as possible.  That's why I have to decide on a location well before the sunrise.

For those of you who have been to Jasper, you have driven past this location.  It's just east of the town and about 200 meters from the turnoff the Jasper Park Lodge.  You can actually see the highway to the right of the picture and I was lucky there were no vehicles going past when I made the image.

The most important technical aspects to this image:

a)  Angle of view for reflections.  Get the lowest angle possible.  My tripod was at its lowest setting.  If your eyes haven't glazed over yet, please remember this if nothing else.

c)  Good tripod + good quality ballhead = the best shake-reduction system you can have.  This picture would have been impossible handheld.

d)  Because I didn't have the luxury of shooing HDR/RAW, I used split-grads to even the exposure out.  Velvia is unforgiving if there is too much exposure latitude.