The Making of "Unexpected" 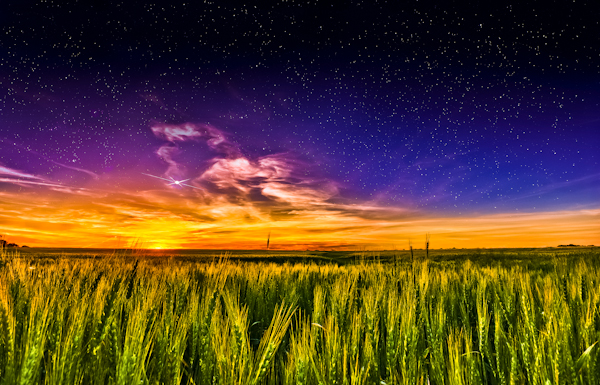 There are two thing you need to know about me.  First is that I love adventure.  Being primarily a landscape/nature photographer and living in Kansas City leaves me itching to get away sometimes.  So, with nowhere in mind I hopped on the highway for about an hour, took a random exit and kept driving until I was lucky enough to come across this field as the sun was setting.

Second is that I am a sucker for unique process techniques. I love pictures that are unique or different than what you would expect. This led me to the processing technique that I used.

Gear used for this shot

In order to ensure the entire range light was exposed for, I took 5 shots with the K5’s exposure bracketing setting and used Nik’s HDR Efex Pro to create an HDR image.  I then left my camera unmoved on the tripod for about an hour and a half and waited for the sky to get dark enough to see the stars.  Being only about an hour out of the heart of KC, I knew the stars would not be extremely visible.  So, I decided to bump the ISO to 3200 and took a series of shots (13 light frames, about 10 dark frames, and about 10 bias frames).  Using deep sky stacker,  I blended the shots to help bring out the stars and reduce the noise.  One thing that I love about the shot which happened entirely by accident was the flare coming from Venus.  My lens had started to fog up while shooting which resulted in Venus looking the way it does.

2 of the 5 pictures used to create the HDR:

A single shot of the stars before using Deep Sky Stacker: 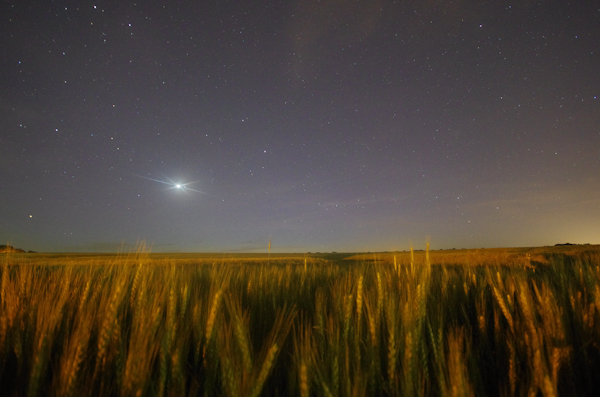 I then edited the two pictures separately.  The HDR shot just needed some simple color balance adjustments and some saturation.  The picture of the sky was imported to lightroom and the noise was reduced.  It was then brought to Photoshop where I selectively highlighted the stars and brought up their exposure to ensure that they stood out.

The last step was importing both of the pictures into Photoshop and blending them together.

Making of "The Dragonfly"