Of the thousands of pictures that I’ve taken over the years, this one is probably my favorite. There are many reasons why I like this picture– I like motorcycles, and I like star trail images. But I suppose part of the reason why I like this image so much is the process that went into shooting it.

It began on a clear dark night. Like usual for a weekend night, I was bored and had nothing better to do. Unlike most weekend nights though, I had my friend’s motorcycle. I was “babysitting” it while he was out of town, which basically meant that I would ride it every once in a while, to keep the carburetor from gunking up. (Or at least that was my excuse…).

So anyway, I had recently started experimenting with long exposure star trail shots, so I figured, what better way to spend a night than to ride around on the bike, then use it as the foreground for a star trail shot?

I found a dirt road next to a farm and parked my bike. I had my wide angle lens attached to the camera, which I set on my tripod facing north with the bike in the frame. Since it was so dark out I manually focused the lens, and set it to the widest possible aperture, f/4 in this case. I set the camera for 30 second exposure at ISO 100. I then hooked up my intervalometer to the camera and set it to repeat indefinitely at 1 second. Then there was nothing for me to do but wait. I ended up lying in the dirt road staring up at the stars while my camera took 38 exposures.

The ride home was less than fifteen minutes, but it felt a lot longer than that. It felt long partly because it was very cold by then and I didn’t have enough clothes on to be riding a motorcycle on a cold night, and partly because I was dying to see how my picture would come out.

At home I used a program called StarTrails (available at Startrails application) to combine the 38 exposures into one image. I took the final result and tweaked it in Lightroom, brightening up the exposure and increasing the contrast a bit.

I sent the picture to my friend, who had it printed on canvas. He no longer owns that bike, and neither of us rides motorcycles anymore, but he still has that picture of the bike on his wall to remind him of all the good times we had with our motorcycles. 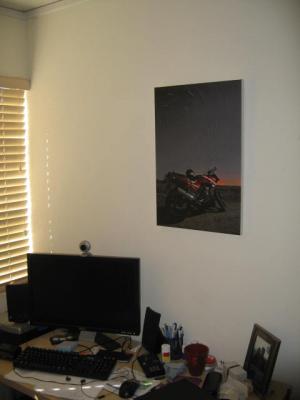 The Making of "Toms Branch Falls"