Take a Picture While You Can! 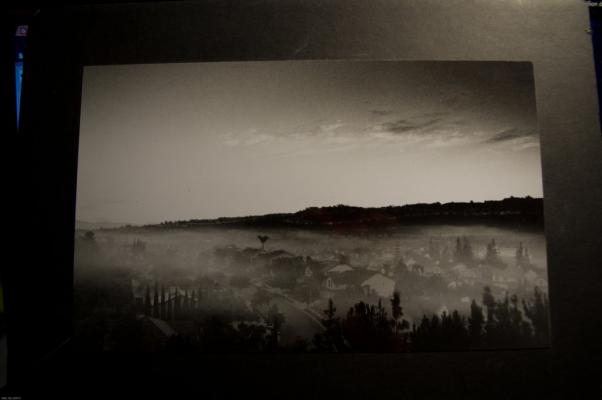 It was a cold winter morning, Woke up early and walked to my parents bedroom to wake them up so they can give me a ride. It was always a habit for me to open their blinds and just to take a peek what golden treasure the windows held behind it every morning, night, rainy day, thunderstorm, etc. I swoop through the blinds and there I see it, a thin blanket of clouds just laying among houses. I ran back out of their room to mine, grabbed my camera and snapped multiples of this. Well 2-3 probably because It was a film camera, Didn't want to waste too much film on it. But man was I ever so excited to finish the roll, just for these shots. At the time, I was enrolled into a traditional photography class so we always developed our own film, and printed our own prints. When I was making a test strip of this, my teacher looked at where my enlarger was and said "Wow, that's a bitchin shot". I felt flattered. I felt that I didn't really deserve that compliment because I mean.. It really wasn't so hard to take that shot, I just had to open the blinds, grab the camera shoot. I believe that I'm just fortunate to have such a great view. Well anyways, I really wanted to make an 8x10 of it, my teacher agreed to help me. I came in early, I stayed after school. I went in during lunch. Just to perfect the picture; It took about lots and lots of test strips, and about 6 full prints to finally achieve the dodges and burns I wanted.

I shot this with a Canon Rebel 2000, I think... 18mm, B&W 400 Arista.
Post Processing; There was a bunch of dots. Everywhere. Then this was when my teacher introduced to me, inkblotting. I inkblotted a scratch, and a bunch of dots around the photo. I was pretty pleased with myself. I saw the spots, but they were hardly noticeable.

Okay, so here's what added to this being my favorite shot.
I printed this because It was for a contest my teacher informed the class about; "Beauty is...."
And people were allowed to submit any shape or form to resemble what they believe "Beauty is"
After I had printed the image, The negative was nowhere to be found. I looked all over the ground for it, turned on the lights. Asked several students, It was gone. There is now one and only one shot of this beautiful scene. And I have it, printed.
Anyways, 2 weeks later, I get an email saying that I won the contest and I get a certificate of photography saying that I won. Even though the certificated wasn't super fancy, I took it to heart. It made me feel good about myself.

The name of this entry was "Take A Picture While You Can"
That's one of my key morals to my photography. Like a sunset, That same shot that you had an opportunity to shoot before, isn't there. So never be lazy to take out your camera or lug your camera around everywhere....just Take a picture while you can. -steezylistic