The making of "Cows"

Using the human body in landscapes

Let me tell you how I created the photo set "Cows". It started off with the idea of using the body as a landscape. Searching the internet I pretty soon found the work of Allan Teger. He is a great photographer who uses miniatures on a human body and creates landscapes like that. He always uses black and white and a lot of back light. I decided I wanted to use color and try to use light out the figures more. Also I thought it would be interesting to use animals instead of human figures.

The first chance I had to work with a model who was willing to participate on the project I went to the model railway store, but found that they had no small animals in store. The did have some small trees. I went to the toy store and bought myself some miniature animals and also some brown clay. I used the clay to put the trees in and have them stand up. With these materials and the model I did my first try on this theme. After I did the shots I found that the clay on the photo needed to have a color adjustment. Also some animals where too much like plastic and I undid if of some glow.

So here is the best example of this first try: 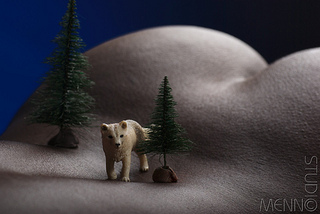 So now I had to wait for the next chance to work with a model that allowed me to proceed with my project. This time I could plan more ahead and ordered some miniature cows in the H0 scale (1:87). Since I was not so happy about the look of the trees I also ordered some new trees in the same scale. And instead of using clay I bought a tube of photo glue to glue the tree and if necessary the cows to the body of the model. I tested this by gluing one of the cows to my hand and it stayed there for an hour while I was going on with my business. After an hour it could be removed easily and the glue came off easy. So now I was sure I did not have to send my model home with cows on her back.

During the session it turned out that the cows were able to stand on their own feet and that the tree needed some glue. I started at the back of the model while she was lying front down. The back was still a bit steep, but I solved that later on by tilting the photo's. After doing the back she turned over and I made the rest of the shots. In total I did about forty shots. I tried to leave nipples and genitals out of the shot and also I used the trees to hide certain parts of the body. I did turn up the light behind the camera a bit more than in the previous photos and also placed it a bit more center.

As for the background in the above photo I used a blue color filter on my flash lighting up a black background paper. Since I was going for a more daytime like photo I first thought of using a filter with lighter blue, but then I saw the background cloth that I have nailed against the wall and decided to try and use that for the sky. I have lit it up with an extra flash and it worked out great.

Now that the photos were taken the post processing needed to be done. First I made a selection. I wanted to use these photos in the hall of the building my studio is in and I wanted 4 or 5  photo to to form a complete set. So eliminated all photos where the body parts were too obvious. Of course I eliminated the photos where I did not like the final composition even after doing tilting and cropping. Finally I was left with four photos that I was happy with. I adjusted the colors and the lighting to my taste. Then I ordered the photo's so that they would connect well together and also that  two photo's were the only difference was breathing in or out were not next to each other. Then I made them fit each other more by cropping and tilting so that the cows were in reasonable similar size and that the body in the border of the photos had the same height of the "horizon".

In the hall these photo's will be hanging next to each other, but for you I created below composition (click to enlarge, please respect copyright).