The Matterhorn from Chamonix

I wanted to share this photo with the Pentax Forums community for a number of reasons. First, I really like the shot! This photo to me represents my first trip to Europe, and an unforgettable three day mountaineering trip in the south of France. Second, I'm a firm believer in discount photography, and making the best of what gear you own, and this image is a great example of that. Third, I've always believed that 'good' wide angle shots are extremely difficult to create, since everything in a very wide field of view has to be just right for the image to come together. With those thoughts in mind, I wanted to share my photo with you, and give you a brief story of how the image came to be. 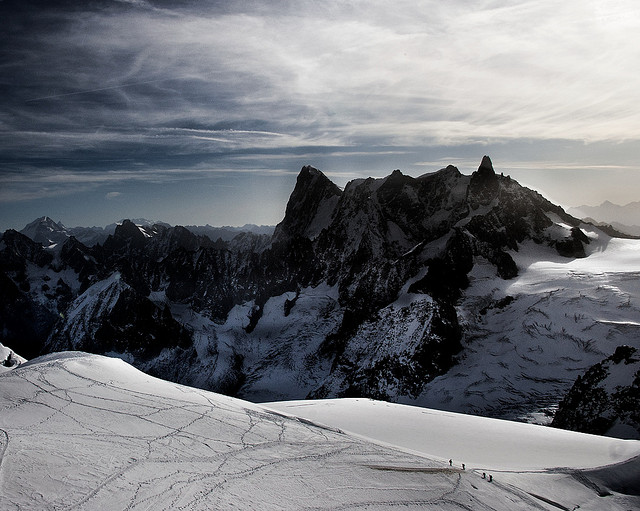 I took this photo with a Pentax K100D Super and its 18-55 kit lens. As I was climbing in the mountains, weight was an extremely important factor in determining which equipment I could bring along for the day. Based on what I had available to me, and the types of shots that I expected to be taking, the basic kit was a surprisingly good fit for my needs - light, versatile, and could still deliver the shots I wanted to capture.

For this particular shot, I stitched together six wide-angle shots in post, but each shot was taken hand-held, in daylight, as I stopped to take a brief break from my climbing. Since it was very bright out, each shot was taken at f/11 for 1/1000s (ISO 200, the minimum for that camera). When I was taking the shot it was very difficult to determine what exactly was going to make up the "core" of the image because everything around me was breathtaking. So my strategy was to shoot first and ask questions later -- yes, I admit it! I knew there was a shot in there, but visualizing wide-angle shots can be challenging for me, especially with a very limited amount of time to take the shot, so I decided to cover my bases and take a series of six overlapping shots that I could stitch together and edit later.

After getting home from the trip, I stitched together the six shots using Adobe Photoshop CS5. Photoshop does a wonderful job of stitching together photos, and the folks at Adobe even seem to continually improve the functionality in each iteration of the software. The resulting panograph was impressive - but it didn't quite capture the feeling of awe that I had when I stood there. I had discovered that capturing the pure scale of the mountains is an exceptionally challenging aspect of photography (take a look at the climbers in the bottom right of the image for a preview), and I wanted to bring more drama into the photo to make up for the lost scale.

After stitching the photos together, I performed the remaining post processing in Apple's Aperture. In particular, I increased contrast in the photo and selectively desaturated colours (other than blue). My goal was to bring the mountains out, and to make them appear to be more menacing than they had been in the pre-processed version. The actual processing ended up being relatively simple, but I think in this case was also particularly effective.

Coming home from my first trip to Europe and pouring over the photos that I took has been one of my favourite moments as a photography enthusiast. I was able to effectively use some basic photographic equipment in a demanding environment - and I came home with this shot as my souvenir. I still take great joy in showing this photo to friends and family, and telling the story of my three days in the French Alps.