This is one of my favorite photos of mine. It is not because I think it is a great photo that I like it. I like it more for the reasons that I like my children. This shot took planning, a little more work than I normally put into a photo and some trust that I could accomplish what I set out to do with very limited resources. I chose to highlight this photo for these reasons, and to show like minded folk what can be done. 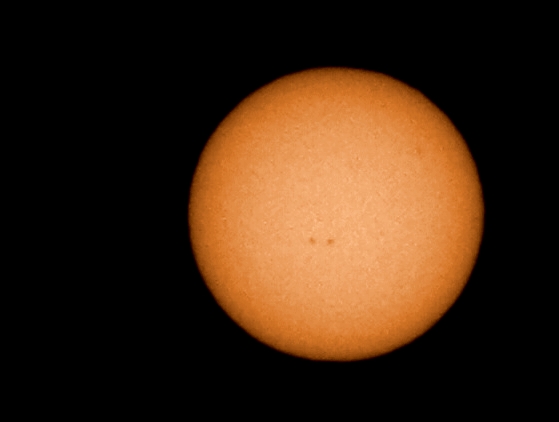 I got interested in creating something like this after seeing some photos from amateur astronomers on the Pentax forum and on flickr. I knew these people had telescopes and other specific gear. Not being able to warrant such purchases I decided to use what I have, namely a really simple 200mm zoom - the smc PENTAX DA 50-200mm F4-5.6 ED WR.

First I tried to capture some photos of the moon but I could not find a setting that would get any detail worth keeping or showing - that lens is not the best for low light situations. I then started to look in the other direction.

The camera needed light and we have this star nearby that happens to make a lot of light. Around this time I had also been playing around with a cheap infrared filter for making dreamy white plants and trees. That filter was so dark that looking through the viewfinder with the filter attached was pretty much pointless. So I thought that maybe combining these two things would result in something interesting.

I started by waiting for a sunny weekend day - it is foggy or cloudy pretty much all the time where we live. Once the day arrived I put on the IR filter, used manual focus set to infinity and set the camera for as dark an exposure as I knew how to. At that time I was only really comfortable using Aperture Priority though, leaving most of the rest of the setup to the camera. I set it to the smallest aperture possible: f/32 and ISO 200. I first tried the lowest ISO setting, ISO 100, but on my camera ISO 100 is implemented using expanded ISO and it was not as sharp as ISO 200, so I stuck with 200.

I did not want to look at the sun through the view finder even with the dark filter on the lens (at least not for too long) so I looked near the sun, then swept over it and hit the button. Even so, it was uncomfortable for a few minutes afterwards. If I were to do this again, I would probably wear sunglasses as well.

The first attempt came out too bright and the sun was just a red circle on the LCD. I checked the settings and saw that the camera chose a shutter speed of 1/4000s and I had already set the aperture as small as possible so I was not sure how to improve it.

I didn't know all the features of my camera, but I did know that it had digital filters available when shooting JPEG and I remembered seeing one for brightness. So I set the camera to JPEG and used the brightness filter to make the image as dark as possible (setting Brightness to its smallest value) and tried again. These shots were then a bit too dark. They were also very red and I could not see the results on the LCD very well. So, I used another digital filter in the K200D and made the resulting JPEGs be B&W. I then start playing with the Brightness filter again. Eventually I found a brightness setting that worked with the aperture of f/32 and the 1/4000s shutter speed that the camera was choosing. These images needed some work though. They were B&W, and the sun was just tiny.

I normally use RawTherapee and GIMP on Linux for editing. These photos were already converted to JPEG by the camera so I only needed GIMP. I added contrast which this brought out the curvature of the sun's surface. I sharpened a little which made the spots more defined. I added some orange color to make it look more like the sun and the final step was cropping it. That is all of the post-processing that was done.

Here is a crop of the original. No other processing was done. 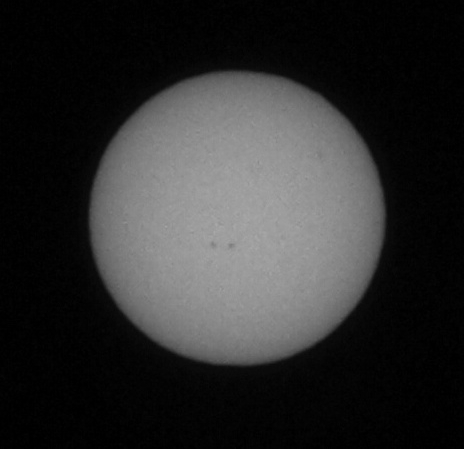 Here are a few of the shots taken before the one chosen as the final (combined into one image):