As my favourite photo, I picked one that I took spontaneously, but not without some planning, while hiking in a nearby forest. I actually took a couple from different angles, but I like this one the most. The photo has a simple content and hasn't been edited much, but it is a nice photo. It has some magic about it, even though it doesn't have intense colours, powerful contrasts, and kitschy processing. 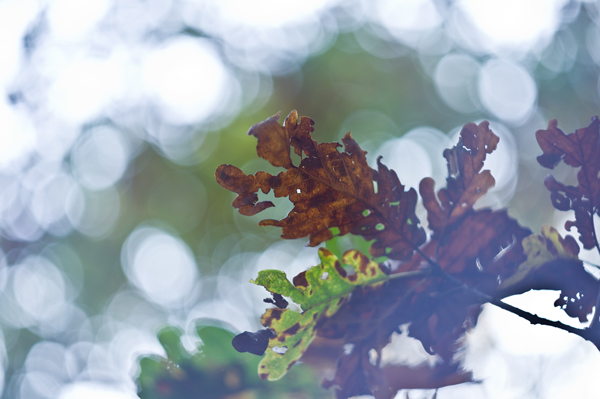 The camera I used was the Pentax K-r. I did not use a tripod or flash and there was a light breeze, so I had to compensate with a wide open aperture to freeze at least some motion of the branch. The lens I used was the SMC Pentax-M 50mm F1.7. I used ISO 200 for this photo. I shot this photo in raw DNG and processed it in Lightroom. The changes are actually pretty subtle, the un-edited photo is not radically different. The White balance is "As shot - 5050 temp, +17 tint", recovery is at 22, blacks 7, and brightness was changed from 50 to 83. Contrast went from 25 to 32, and then I also added clarity +100 (to really emphasize the different shapes in the photo) and saturation to +17.

The "flare" could have been removed in post, but I like it as it adds an ethereal feel to the photo and fits the loose highlight bokeh in the background. I focused almost as close as possible to fill the frame with those leaves and emphasize the background bokeh balls, I just wish I could have a slightly wider DoF while retaining the light quality.

Wide open, combined with the rather slow shutter speed of 1/125 and a light breeze, this isn't the sharpest photo. I bumped the clarity and also the sharpness: Sharpening 40, radius 1,8, detail 40, masking 4, but then I also opened the photo in Photoshop and selected the little in-focus area of the leaf, layered via copy, and used the High pass filter (at 4.0) and then turned that layer into an "overlay" (this is a typical sharpening technique, but I applied it selectively. Be sure to select the area just around the edges that you want to 'sharpen'). I left the tone curve alone. The photo is overexposed and may seem to be way too bright on a digital monitor, but on print it will look much more reasonable. For comparison, here is the out-of-the-camera, unprocessed raw, simply saved as JPEG: 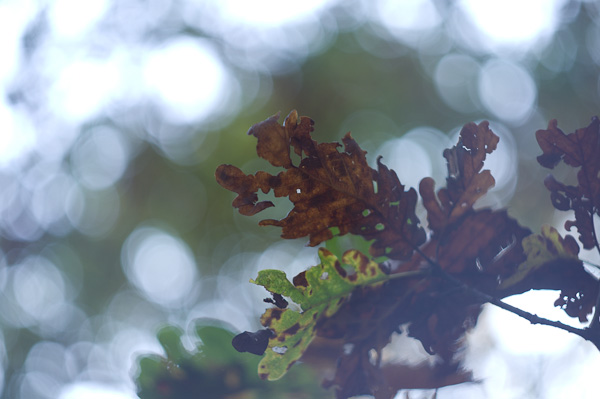 I like the photo as it is, because it is odd (has flare, not very sharp, doesn't have a special subject), but still manages to convey the mood of that forest. In short - I used a manual lens in a dark forest, wide open, near focus, planned my composition, and touched up some details.