I chose this picture because it  1) illustrates the principles I want to discuss and 2) I really like both the pre and post-processing results. 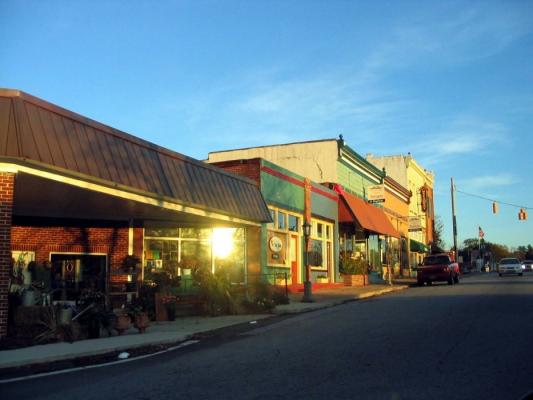 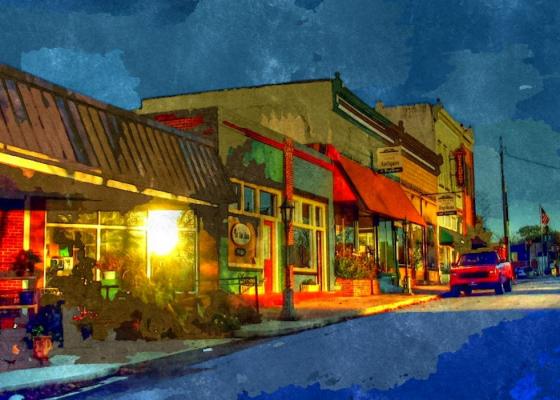 The media of still photography are light and time.  The technology that is used is but a way of capturing light at a certain time and turning it into a product, the image we can see over and over again.   But light is everything.  We see the objects, the forms and shapes, according to the light shining upon them and reflected from them.  The most aesthetic forms are nothing without light, and the most mundane can become glorious, perhaps only for an instant, when the light is just right.

Such was the case with the beginnings of my photo, Watercolor Town.  While some photos are staged and directed with pre-conceived notions, even a grand idea, well before the shutter ever grants the light admission, Watercolor Town was serendipitous, an accident, a gift lovingly accepted.  A row of shops in nearby Clarkesville, Georgia, raked by the light of the setting sun, became shapes, textures, and colors in this moment.  The fortuitous placement of a red pickup truck became an accent and counterpoint to the diagonal sweep of colorful shops and their brilliant stab of sunlight.

I usually use my Pentax K100D for my serious shots.  In this case all that was in the car was a small Canon Powershot A70.  With the camera set on auto, I quickly tripped the shutter, knowing that at that moment, I was seeing something special.

Though I was pleased with the result, the creative part of me wanted more.  All that digital information could be made even more entrancing.  A computer app (Sketcher) could render the image with a watercolor effect.  A bit of tweaking, and the final image was born.

But first of all it was the light, and the moment, as it is with all still photography.