I hesitated when I chose to use this photo for this submission. It' is not a magnificent photo. It was taken with a 4.1 MP point and shoot. It was "shot from the hip", the highlights are blown out. The composition could be better. In reality it was an "accident". However, I really like this picture. I would have to say it is on my short list of favorites. This got me thinking: What really "makes" a good photo? 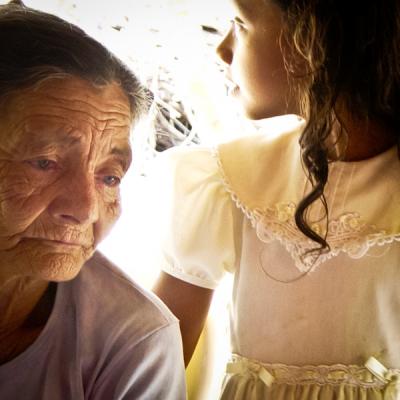 Perhaps it is the story that makes a photo. I want you to see this picture through my eyes. Let me tell you its story.

During a year of volunteering at an orphanage in the small Central American country of El Salvador I went on an outing with small group of doctors, nurses and students. We traveled to a mud and bamboo home in the mountains near the small town where I was staying. We were there to provide a temporary clinic for the families who lived in the community around this home, which belonged to Maria and Elias.

From the first moment I met Maria I wished I could capture the essence of her personality and spirit. She was so cheerful and caring, she welcomed me with a warm hug and make me feel like she was my very own grandmother. Her spunk reminded me of Granny from The Beverly Hill Billies, but her eyes, surrounded by a network of deep creases from much smiling also betrayed the fact that hers was not an easy life. She lived with her husband and two grandchildren, a boy, probably 6 and a girl who was about 9 years old. Neither child had ever been to school. Neither had learned to read or write. Both were very shy.

I saw in Maria's eyes the burden of love she had for these, her grandchildren. The burden of knowing that her and her husbands failing health would likely leave them on their own before too long. What would become of them? Who would take advantage of them? Would they have food to eat? These eyes had seen much no doubt. I could tell hardship and sorrow had frequently been her companions. Yet somehow she exuded a joy that I have rarely encountered, even in the lives of those who seem to have all they want and need.

I had brought my camera, a little 4 megapixel point and shoot. All I had at the time. I really wanted to capture the reality of this time and place. I sat down in a plastic chair with the camera in my lap and just started taking pictures. I could not see to frame them. I just pointed in a general direction and pressed the silent shutter.

When I weeded though the results later this particular photo jumped out at me. It seemed to capture somehow in a small way the raw life story that I glimpsed that day. The concern of a grandmother and the hope of a granddaughter.

Often the most meaningful pictures are not the most "technically" correct or the ones shot with the most expensive gear. Often it's the accidental, the simple, the chance view into someone's story "makes" the picture. And sometimes it's these pictures that make us.

Here is the original: 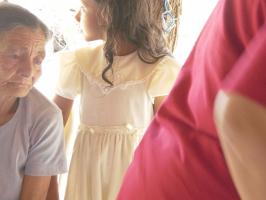