Whenever I try to pick my favorite photo, this photo comes up more frequently than any other photo.  It was taken just outside the pedestrian entrance to Zion National Park and currently graces my wall as a 20x30 on "metallic" paper that really makes it pop. 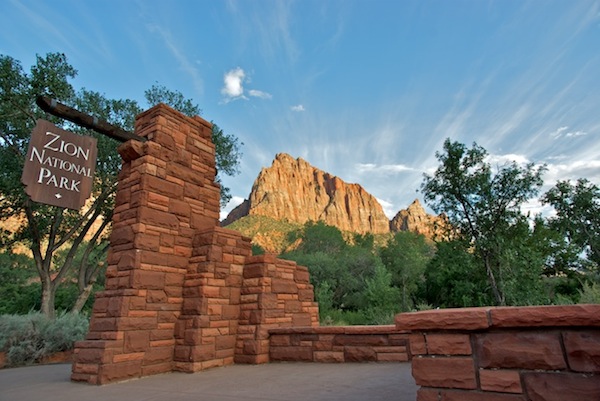 Like many great images, this picture required two "making of" processes: one during the shot, and another during processing. While I was wandering around the entrance to Zion National Park the sun began to set and really lit up the rocks on the opposite side of the canyon.  The clouds and sun aligned to beautifully light up the Watchman formation and crown it with clouds radiating outwards.  The signpost and trees framed the formation perfectly while mirroring it's lines and (by getting the camera low to the ground) the low rock wall hid the cars in the parking lot behind the scene.  Because of the bright formation in the background and the shade covering the foreground I used a little bit of exposure compensation as my histogram showed I had a little bit of room to play in the highlights.

When I loaded the image onto my computer, the colors and exposure balance just weren't quite what I remembered.  The first thing I did was to use the Highlights and Shadows adjustments in Aperture to tone down the highlights and bring up the shadows.  That dialed back the extremes but cost me some contrast, so I gave it a small boost with the Contrast slider.  After that I used the Color adjustments to pump up the red a bit to bring out the color in the sandstone and tweaked the white balance to warm the whole scene up a tad (as the entire foreground was in shadow).  To see just what a few simple adjustments can do, here's the "before" picture: 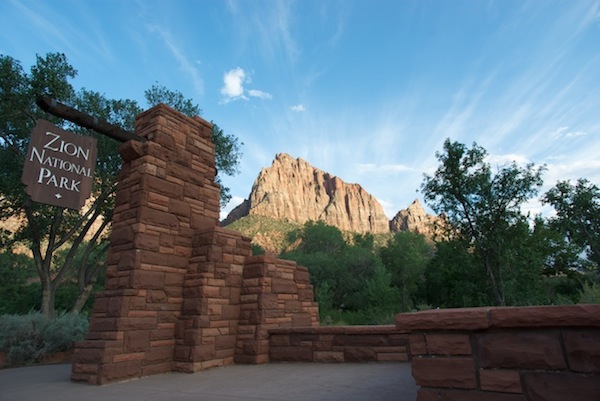 As I mentioned above, when printed out on metallic paper and lit properly this image really pops.  The contrast of colors between the oranges, greens, and blues really calls to me.  It was a great trip and this photo has probably been my best take-away from the trip.  Now, whenever I think of Zion National Park, I think of this photo.

The Making of "Toms Branch Falls"