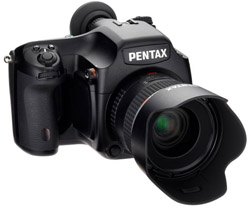 Alongside the K-5 1.03 firmware update, Pentax has also released new firmware for the 645D.