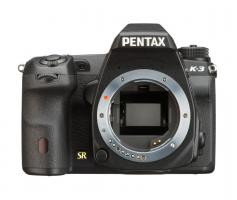 Pentax has just officially released its second firmware update for the Pentax K-3 flagship: version 1.02. The update is available for download here, and like all other updates, it is cumulative meaning that previous updates are included in the latest download.

This update adds one new feature to the K-3:

Check out the k-3 v1.02 firmware thread on the forum to see what others are saying so far about this update, or read on for installation instructions.

See our in-depth review for more information about the Pentax K-3.