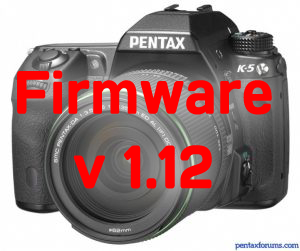 Firmware version 1.12 for the Pentax K-5 has finally been officially released!  As expected, this update only includes stability fixes.

According to the Japanese Pentax site, the following change was made:

According to other sources, other minor stability issues (such as feezing) have also been addressed via this firmware.  The previous firmware version, 1.11, was released nearly 6 months ago.

Download the firmware or read on for installation instructions.  As always, this firmware includes all the updates introduced in previous versions.

In order to upgrade your K-5's firmware, follow these simple steps: