Like many of our readers I have also gone through a good number of camera bags in search for the "ideal" bag. My search may finally have born fruit!

I never liked backpacks too much although I have two of them... they are cumbersome, they have to be laid down on the (wet and muddy) ground to be opened unless they are of the flipside variant which has its own usability issues.

I have therefore resorted to the messenger style bags which allows one to organize a lot of stuff neatly, including the non-photo stuff like phone, wallet, passport, maps, etc. But these bags have no room for that extra sweater or rain coat, and they put an awful lot of weight on just one shoulder, in particular if you also have to drag a laptop along. So my search continued.

Then I saw an ad for the Manfrotto Advanced Active Backpack II, and it looked as if it would meet all my needs, and then some. So I ordered one. At US $119 I found the price more than reasonable (click image to enlarge): 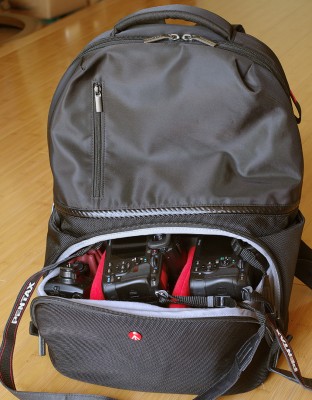 The cool thing about this bag is that it allows you to carry two or three Pentax K-Mount bodies with lenses mounted "nose down" in the bag, which is how I prefer it. I don't like switching lenses in the field all the time, so the ability to have at least two bodies at the ready with the lenses most fit for the occasion already mounted is a big plus for me. And it doesn't hurt that the bag stands upright when you open it - you don't get muddy on your back with this design!

I said Pentax K-Mount bodies.  The beauty of the Pentax system is its compactness - camera bodies as well as lenses. This is what allows for carrying a lot of equipment in this bag with two or even three kits at the ready at all times. Wouldn't work so well if you shoot with a Canikon D4 or 1D, or a big lens, though.

Read on to see how much equipment this bag swallows with ease.

Here is a closer look at the main compartment. It swings out and reveals the contents (click this and any of the following images to enlarge): 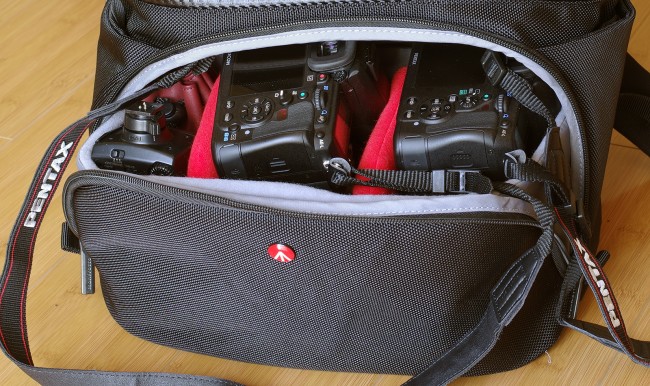 I stuffed the following into this compartment and it could easily be swung back in and closed:

Did you say laptop? Well, that goes in too, and not just the slim ones. My bulky 14" Thinkpad T420 fits with room to spare: 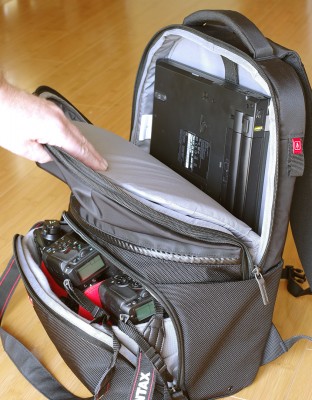 There is even a (removable) soft cushion at the bottom of the laptop sleeve to protect against bumps and such.

The top compartment is quite large with ample space for more lenses, a sweater, food and snacks, etc. I dropped an smc Pentax-DA* 60-250mm F4 zoom in and it doesn't look of much. The 60-250mm also fits in the main compartment, but not when mounted on a camera. 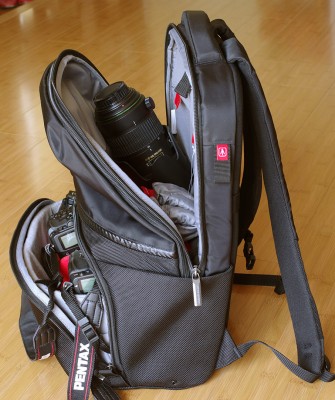 Inside the top compartment are a couple of small pockets for memory cards, passport, and such, and on the outside is a zippered pocket for your plane or train tickets, or a phone if you dare (a phone that accessible would tempt any pick pocket).

Here is what I listed above that could easily fit in the bag and with plenty of room to spare in the top compartment: 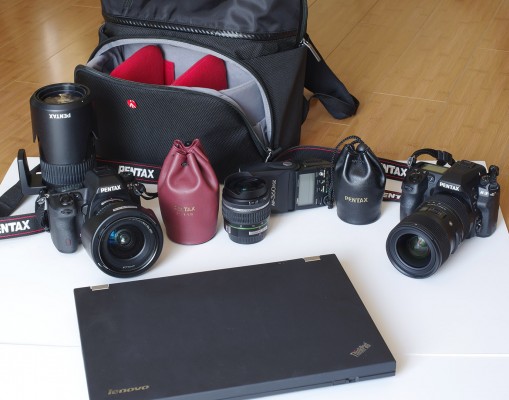 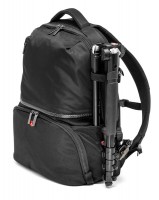 Did I mention that a tripod can be affixed to the right hand side? Well, a small tripod can, not the monster PF normally uses for reviews, so I haven't tried out that feature. Henceforth we resort to an image courtesy of Manfrotto of how to carry a tripod (click to enlarge).

Is this the ideal camera bag? Probably not, but it comes close. It would have been nice with a large zippered pocket on the left (non-tripod) side, roomy enough for filters and a lens cleaning kit. The bag has no waist strap - some may miss that, but it makes it a breeze to take the pack on and off.

This bag is currently on sale for $99 at Adorama - $20 cheaper than what I paid!

Building a Quality Lens Kit on a Budget