In the hands of a photojournalist - with samples

Today, we're happy to be bringing you another hands-on look at the Pentax 560mm, this time in video format and from the perspective of a photojournalist.  For more information on the 560mm, check out our in-depth review.

In short, Albert found the lens's reach to come in very handy in practice.  The lens was easy to handle thanks to its rotating tripod collar, locking hood, and built-in polarizer filter.  The autofocus proved to be very accurate, though the speed was not something to boast about. Cons of the lens included poor bokeh and some purple fringing.  Overall, he highly recommends the 560mm for photojournalists that need reach above all else.

Below are 24 more sample photos from his shoot:

In March, Nikon entered the world of premium compact digital cameras by announcing the Coolpix A, the smallest digital camera to feature an APS-C sensor.  Just a month later, Pentax Ricoh announced the new Ricoh GR, an evolution of the Ricoh GR Digital IV (GRD IV) that was fitted with an APS-C sensor similar to the one in the Coolpix A.  These two cameras are built for professionals who cannot always justify carrying around a bulky DSLR, and they promise to deliver DSLR-grade image quality in a much smaller package (as long as you can live with the fixed 18mm focal length).

It seems that Pentax Ricoh did their homework when developing the new GR, for in almost every area, the GR's specifications are either better than or the same as those of the Coolpix A.  On top of this, at a MSRP of $799, the GR is $300 cheaper than the Coolpix A, which retails for $1099.  This makes the GR one of the most affordable cameras in its class.

However, we all know that numbers alone do not reveal the true nature of a camera from a photographer's point of view.  Therefore, we feel obliged to compare the Ricoh GR to the Coolpix A in a head-to-head in-depth review to see which one performs best overall.  We will also be comparing the Ricoh GR to its predecessor and reviewing it separately, as the older GRD IV- which is still being sold- will appeal to a much different audience with its lower price tag of $399.

We have been in possession of the GR and GRD IV for over two weeks and the Coolpix A for about one week.  The Ricoh GR has (strangely) not yet arrived at retailers in the US, though we expect this to happen very shortly.  Read on for our first impressions of the three cameras.

How Qute is the Pentax Q?

The smallest interchangeable lens camera in the world!

It can be difficult to comprehend how small the new Pentax Q is unless you see it side by side with some familiar objects. So here you have the Q with its standard prime lens next to a smart phone leaning against an FA 31mm Limited lens pouch! Yes, the Q with lens would fit in the lens pouch with room to spare!

So, we can safely conclude that the Pentax Q is "Qute"! 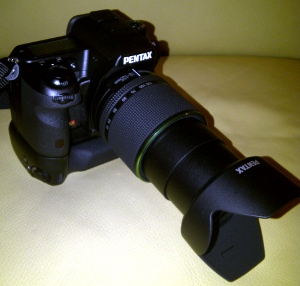 Pentax's new 18-135mm zoom lens started shipping early last week, and stock sold out quickly!  Both Adorama and B&H have sold their entire stock of the lens; at this time, they are still taking pre-orders for their next shipments.

We were fortunate enough to receive our copy today, and have nothing but good things to say about this lens!  First of all, it seems that Pentax might be moving away from the "SDM" acronym in favor of "DC".  The new autofocus motor in the 18-135mm, advertised as "DC", seems to be much faster than the SDM in previous lenses, and is nearly inaudible. In other words, the AF aspect of this new lens was a very big positive surprise!  Mounted on the K-5, this lens autofocuses just as accurately as the expensive star lenses that we have tested (the accuracy is almost too good to be true).

Physically, the lens was a bit smaller than expected, but it does feel quite dense in your hands.  It features internal focusing, but not internal zooming, and thus extends to about twice its normal length at 135mm. The zoom range is fairly long, and as such there is significant throw when zooming.  The focusing ring doesn't have a distance scale, and has relatively short throw (it also allows for "quick-shift" manual focusing).

Through preliminary image tests, it appears that this lens has fantastic color reproduction.  The sharpness is excellent, though not quite as good as that of star lenses.  Thus, we can conclude (for now) that this lens will be appealing to the serious amateur photographer looking for a flexible walkaround lens with above-par image quality and focusing speed.

Stay tuned for an in-depth professional test along with comparisons with the kit lens and star lenses.