Our Single AF test was performed in much the same way that we test lenses. We placed the cameras on a tripod, mounted a lens, and tested the AF speed by focusing on a high-contrast target at a medium distance. In this case, we selected a target 3 meters in front of the camera. Light levels were varied and each test was repeated three times to take into account repeatability and operator error.

We selected three lenses for the test. The first is the FA 77mm F1.8 Limited, a lens using screw-drive AF. The second is the DA* 60-250mm F4, with first-generation SDM. The third is the DA 16-85mm F3.5-5.6, using the newer DC motor. These three lenses present the added advantage of providing overlapping focal lengths.

In order to ensure that no changes occurred between tests, especially when mounting a lens on each camera, the DA* 60-250mm was set at the 60mm end of its range and the DA 16-85mm at the 85mm end. This provided focal lengths close together while removing the risk of having different test conditions with the two cameras.

Each lens was manually adjusted at its closest focus distance prior to each measurement. Tests were performed with Phase Detection (through the viewfinder) and Contrast Detection (using live view).

Results with the FA 77mm Limited 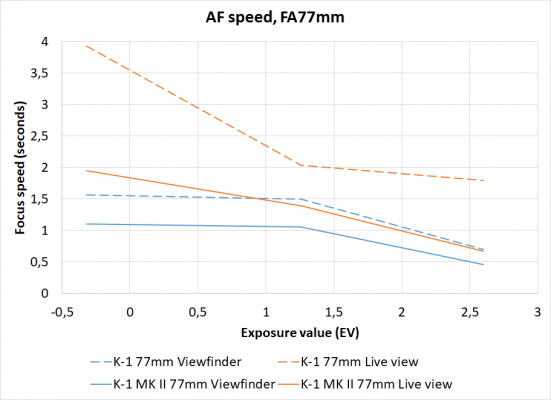 In all cases, the K-1 II is ahead of the K-1 with this screw-drive lens. Differences are more obvious using live view, and are consistent at all tested light levels. Improvements average around 0.5 seconds when using the viewfinder, and vary from 0.5 to almost 2 seconds using live view. 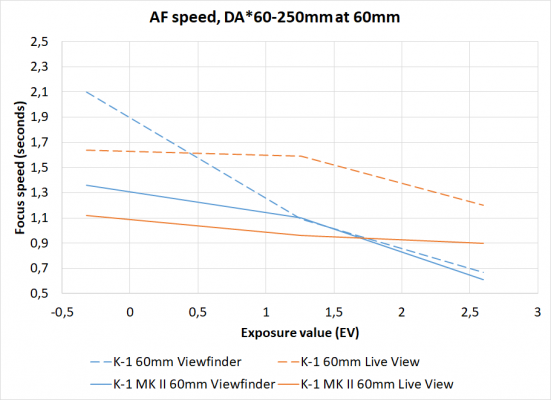 Differences are still present, but are less dramatic with this SDM lens. Using the viewfinder, the K-1 II leads by a half-second for very low light levels, but the two cameras are almost identical as soon as EV values reach 1.25, a low level in itself. Using live view yields a more constant difference of approximately a half-second. This difference is getting smaller as light levels increase.

The third chart shows the AF speeds obtained with the DA 16-85mm. 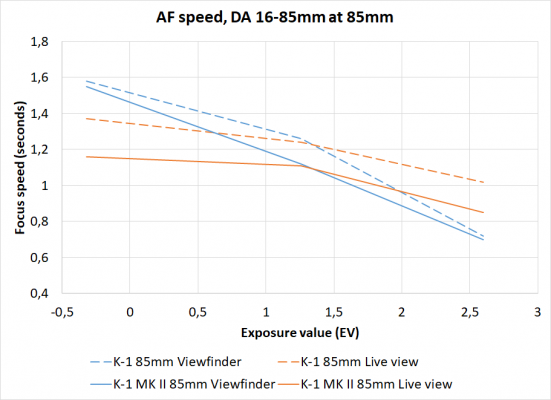 In all cases, the K-1 II shows faster AF than the K-1. The improvements vary greatly depending on the lens and the AF technology used. The most significant benefits are observed with a screw-drive lens using live view. Our tested DC AF lens showed only marginal improvements.

We can conclude that the K-1 II offers consistent improvements for AF-S. However, actual results will depend strongly on the lens, illumination and test conditions. We cannot conclude, for instance, that all screw-drive lenses will show the same improvements that the FA 77mm showed using live view in low light. Expect results similar or better than those of the K-1.

Continuous AF, or AF tracking, is trickier to evaluate quantitatively. To do so requires repeatable test conditions, target speeds, illumination and direction. Many AF-C tests have been criticized for their perceived lack of reproducability.

We tested the AF-C performances of the two camera using targets moving in three directions: towards the camera (forward movement), away from the camera (backward movement) and from one side to the other, keeping a constant distance (lateral movement). We then performed a statistical comparison of the results. In each case, we took a great number of test pictures and ranked the results on a three-levels scale

This scale is of course subjective. To preserve objectivity as much as possible, the same person ranked the images without knowing which camera took each picture. All pictures were captured in good light with even illumination.

For this test, we used cars coming towards the photographer on a highway. Even if car-to-car speeds vary, they will be for the most part within ±10% from one another, ensuring repeatability when a large number of images are captured. We set the cameras to high-speed burst mode using the center AF point only. Focus was locked on a distant target and the AF point was kept on the car’s front bumper as the camera captured pictures in burst mode.

We used AF Hold set to Off and to level 1. Higher levels were not suitable for this kind of test.

The following chart compares statistically the results obtained with each camera. 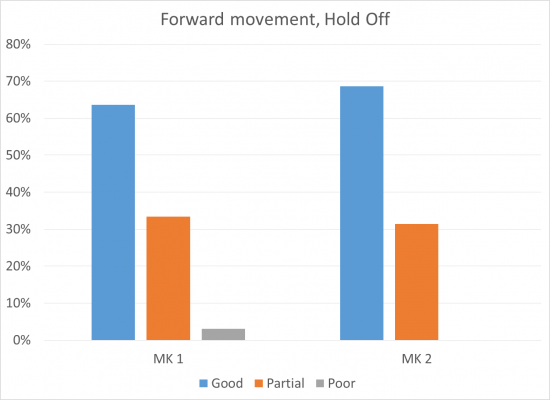 As can be seen, the K-1 II performed marginally better. The difference is mainly that the newer camera produced no "poor" images, and a few less "partial" images. The gain is around 5% more "good" images, a small but welcome improvement.

The next chart shows the same results using Hold 1. 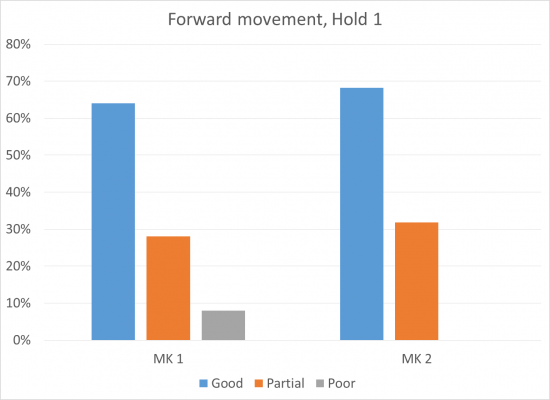 The results are for the most part similar. The K-1 II shows a few more "partial" results, but no "poor" images. The differences between Hold Off and Hold 1 are not large. In both cases we can conclude that the K-1 II is moderately better.

We performed the same test with cars moving away from the photographer. Focus was locked on the license plate of the cars, and they were tracked in high-speed burst mode.

The first chart again shows the results with Hold Off. 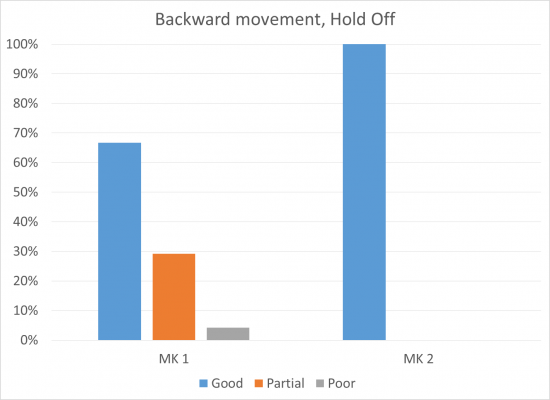 Here the results are dramatically better. The K-1 II produced no "partial" or "poor" images, while the K-1 produced results comparable to those obtained in the previous test.

We then tested the Hold 1 setting. 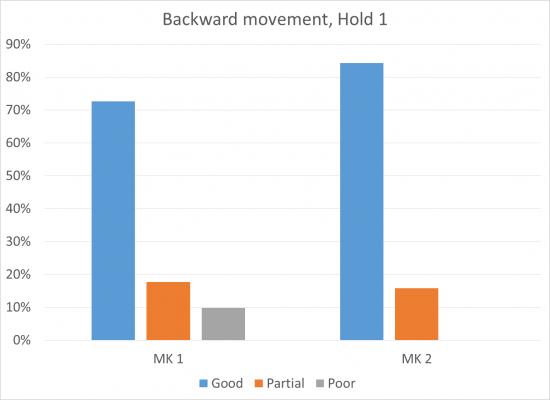 Here the K-1 did slightly better, with "good" results higher than 70% for the first time. The newer model still took a strong lead and delivered a better hit rate.

With targets going away, there is no doubt that the K-1 II offers visible improvements.

For this test we proceeded differently. In order to measure how each camera was able to follow a subject as it moved across the frame, we used the center 25 AF points and set the starting point to one side of the frame. We locked on a subject as it passed on this point, let the camera track it as it crossed the frame, and took a picture as the target touched the point opposed to the starting position. Since we did not test burst mode, only AF Hold Off was used.

The following chart shows the results. 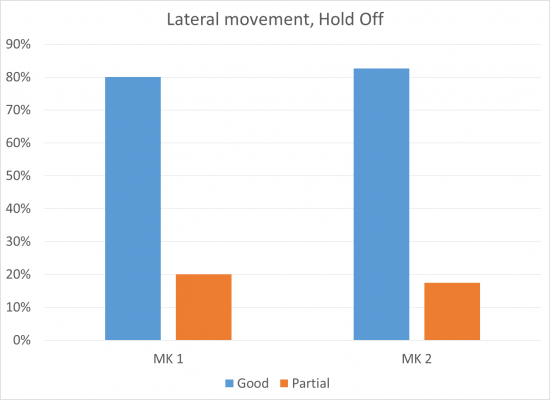 For this test, there is no significant difference between the two cameras. The K-1 II appears slightly better, but the differences are so small as to be irrelevant. In fact, both cameras performed very well.

To put it simply, the K-1 II is a clear improvement regarding AF, when compared to its predecessor.

Based on these results, K-1 II users should consider using AF Hold Off to get the best hit rate in most cases. K-1 users interested in improved AF speeds and accuracy will benefit from the upgrade to the K-1 II.