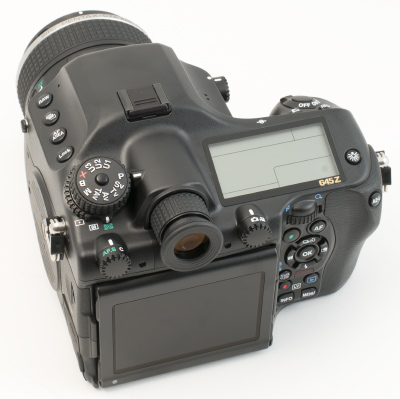 We received a Pentax 645Z for review today, courtesy of B&H Photo, who sent out the first shipment of the cameras yesterday.  Over the course of the coming weeks, we plan to take it around the country to capture some breathtaking landscape photos while evaluating the camera for our in-depth review.

In the mean time, here is a collection of sample photos from today's shoot with the 645Z.  Each sample is accompanied by a full-size RAW and developed JPG download.

With its 51-megapixel CMOS sensor, the 645Z delivers impressive files with stunning resolution, as you can no doubt see.  Furthermore, at high ISOs, its files are much cleaner and more detailed than those from its predecessor (the 645D).  We will post a more detailed analysis of the 645Z's high-ISO performance and dynamic range in an upcoming first impressions post.  It will be interesting to see how the camera fares near the limits of its sensitivity range, i.e. between ISO 51,200 and 204,800.

The 645Z inherits the Pentax K-3's impressive white balance system, which is especially effective in low light.  Notice how the two nighttime photos above don't suffer from the yellow color cast which often plagued low-light photos from cameras before the K-3.

With the D-FA 55mm F2.8 "kit lens", we found the 645Z under-expose slightly, yet consistently.  The camera's default JPEG preset also delivers slightly flat colors, so we will experiment with adjustments that might deliver better out-of-camera JPEGs (note that all JPEGs in this post were developed from the corresponding RAW files).

Based on what we've seen today, we can already safely conclude that the 645Z is any landscape photographer's dream.  But if you're interested in the hard evidence, stay tuned for our first impressions post followed by an in-depth review of the Pentax 645Z!