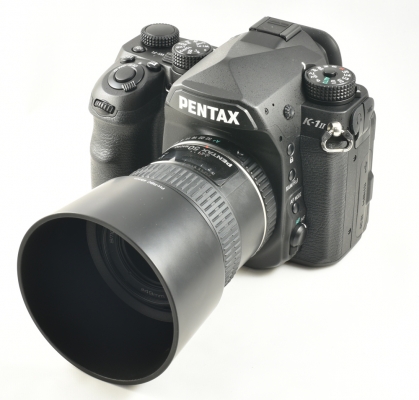 Welcome to the first article in a series of early hands-on first impressions of the Pentax K-1 Mark II! In this installment, we will be taking a closer look at the K-1 II's hand-held super resolution feature, which promises to bring out more detail in photos without requiring a tripod.

The original Pentax K-1 (as well as the K-3 II, K-70, and KP) supports Pixel Shift Resolution (PSR), a type of super resolution technology which when enabled, automatically combines pixel data from multiple exposures (each shifted by a single pixel) to noticeably increase detail, improve color accuracy, and reduce noise in photos.  This takes overall image quality to the next level, but only works on perfectly stationary subjects, and requires a tripod.

The K-1 II takes things one step further by eliminating the tripod requirement.  Referred to by Pentax as Dynamic Pixel Shift Resolution (DPSR), this new technology extends PSR by incorporating stabilization (i.e. Shake Reduction) and enhanced processing, thus allowing for hand-held super resolution captures. The K-1 II is the only DSLR currently on the market that can perform this type of super resolution imaging automatically!

Naturally, we want to find out whether this is all just marketing speak, or if the K-1 II can in fact deliver better hand-held photos with the flip of one setting. To do so, we photographed a miniature at ISO 1600 (to bring out some baseline noise) and shot one conventional photo on a tripod, one PSR photo on a tripod, and one DPSR photo hand-held. As with PSR, DPSR of course require a stationary subject.

The thumbnails below are cropped out-of-camera JPEGs; click to compare.

Based on this test, it looks like DPSR is capable of delivering images that have an edge over standard tripod captures.  The level of detail from DPSR is not quite as good as in traditional PSR with the tripod, but noise levels come surprisingly close, and the shadows are clearer.

The main caveat is processing time: the camera performs some intense computation after each DPSR capture, and in the case of this photo, it took about 20 seconds (during which the camera is locked up).

Our preliminary verdict of DPSR is that it works better than we expected and can produce results that rival conventional photos shot on a tripod, without needing the tripod.  Noise levels are reduced and detail is improved, but not quite to the extent as in PSR files.

Due to the processing time, it's not a feature you'll be using for every shot, though it will have its moments.  For example, DPSR could come in extremely handy if you happen not to have a tripod, but still want a very detailed photo of a scene— especially if there isn't much light and you have to use a higher ISO.

We also captured RAW files of these tests, but processing them outside of Pentax's own software will require care; currently, third-party support for DPSR is undocumented, and we thus leave this comparison for our upcoming in-depth review.  The review will of course also feature a wider selection of more interesting scenes, such as landscapes.

In the mean time, take a look at the full-size files and tell us what you think in the comments below.

Also, stay tuned for more comparisons of the K-1 and K-1 II: we plan to look at high-ISO performance side-by-side in the coming days.

A Hands-on Look at the Pentax K-1 Silver