A grueling hike, plus an evening on the Santa Fe Plaza 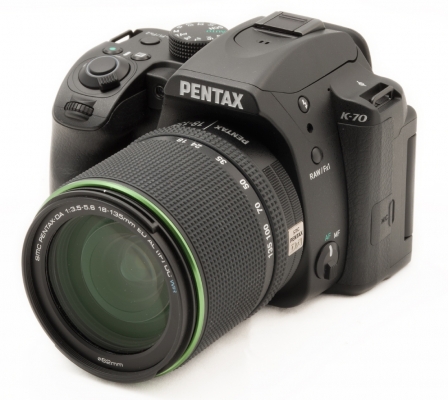 The Pentax K-70 has been hotly anticipated by Pentax Forums readers, so we're happy to deliver a set of full-size sample shots. These samples include both bright daylight and dim artificial light examples, to give you a better idea of what the K-70 is capable of across varying shooting conditions. The majority of the outdoors/daytime shots below come from a hike to Wheeler Peak near Taos, New Mexico, and were taken using the DA 35mm f/2.8 Macro Limited, the FA 31mm f/1.8 Limited, and the FA 77mm f/1.8 Limited. Meanwhile, the low-light shots around the Santa Fe Plaza were taken using the DA 18-135mm DC WR kit zoom.

The K-70 performed admirably in bright light, producing accurate colors and crisp details with these high-end lenses. In-camera corrections seem to work quite well in most cases, limiting purple fringing and other aberrations from the film-era glass. As we've come to expect from Pentax DSLRs, out-of-camera JPEG quality is a little lacking, with ample compression and some muddiness even at low ISOs. Note that many of the JPEGs were shot using the "Landscape" Custom Image profile, rather than the default "Bright" setting.

Click on any thumbnail below for a larger, post-processed version of the corresponding photo. Below each thumbnail you'll find links to unedited out-of-camera JPEG and DNG RAW files.

All photos were shot hand-held.

We know many readers are interested in the K-70's new expanded maximum ISO setting of 102,800, so we wanted to provide some samples taken in dimmer light, as well.

While we're happy to see wider sensitivity ranges filter down to mid-range models, it seems clear from these shots that ISO 102400 is very much a last resort. That only makes sense, really—you might reasonably expect to get usable ISO 102400 shots from a $6,500 Nikon D5, for instance, but from a $650 entry-level Pentax? It's probably better to just look at it as extra headroom for the lower sensitivity settings.

Based on our initial experience, we'd put the threshold of usability for the K-70's high-ISO settings at around ISO 6400 for color shots (after which chroma noise begins to creep in) and maybe 25600 for monochrome conversions (assuming you're okay with lots of grain). Of course, you can feel free to download the samples below and decide for yourself.

All shots were taken with default settings (auto NR) on a tripod.

For more information on other aspects of the K-70, check our our hands-on first impressions, and stay tuned for the full in-depth review!