The stylish new DSLR from Pentax 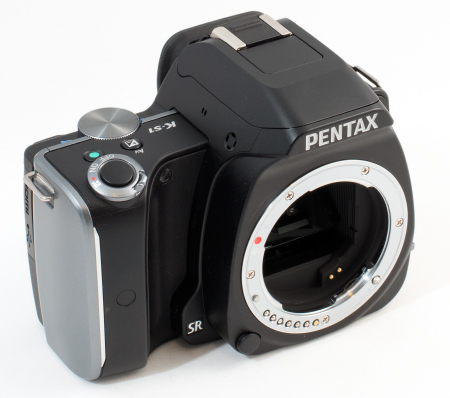 Over the course of the past couple of weeks, we have had a chance to start testing the Pentax K-S1 and Q-S1, the first two members of a new lineup of stylish Pentax cameras.  The K-S1 is the bigger of the two bodies, and the first Pentax DSLR to sport a 20.2 megapixel APS-C sensor.

As far as features go, the K-S1 shares the majority of its hardware with the Pentax K-50, though a few things have been incorporated from the K-3 flagship, including an effective moire mitigation system known as the "AA Filter Simulator".  There is no question that the K-S1 is a very capable camera from a technical standpoint, but that's not what it's all about (if you'd like to delve deeper into the specifications, visit our camera database).

Yes indeed, the K-S1's key selling point is its appearance.  On top of the 12 original colors, three additional colors were announced last week for a total of 15.  The various colors match different themes, ranging from fruits to textiles to scenery.  Three of the colors are offered as standard kits: black/grey, white/grey, and blue/grey.

In addition to having good looks, the K-S1 is meant to be novice-friendly.  Therefore, the K-S1's user interface has also seen some modifications:

These changes are complemented by the addition of colorful LEDs to the front of the camera, the on/off switch, and the mode dial.  The frontal LEDs that line the grip can be used to display a self-timer countdown: something that our family members were able to appreciate when we took a group photo.

So, is the K-S1 an entirely different beast because of these changes?  Does form take a toll on function?  Read on to find out.

We are happy to report that the K-S1's interface feels very inviting.  From a beginner's point of view, being able to see all of the modes without looking away from the screen can be helpful.  Similarly, the new Effect mode provides convenient access to special effects that appeal to casual users.  The face-lifted graphics leave a good first impression and make the menu system look more professional.  Refer to the screenshots below for a few examples of what the K-S1's menu system looks like.

Underneath this facade, however, the K-S1's interface is virtually identical to the interface that seasoned Pentax users are accustomed to.  The 4-way pad provides access to key camera settings, there is a useful info screen for quick access to advanced settings, and the classic menu contains the same custom functions and settings present on the K-50.  The button layout is also otherwise identical to that of the K-50 and earlier Pentax bodies (and unfortunately, live view still can't be accessed single-handedly). 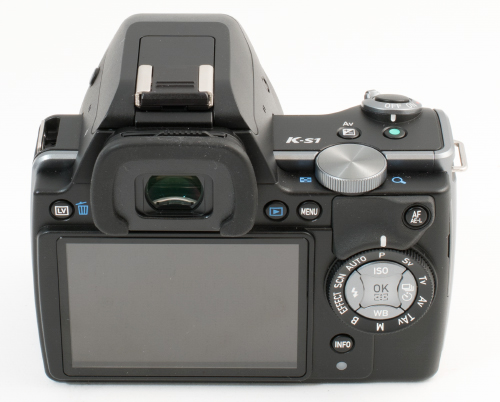 There is one new thing unique to the K-S1 among K-mount DSLRs: context-sensitive menus.  When the Menu button is pressed, rather than showing the previously-accessed menu page, the camera will display the page that's most relevant to the current shooting mode.  For example, when in video mode, the video tab would be shown.  Likewise, in live view, the Menu button takes the user straight to the live view sub-menu.  This saves time and makes accessing relevant settings quicker.  We first saw this enhancement on the 645Z.

When the K-S1 was first announced, many complained about the lack of a second control wheel.  After using the camera, however, we didn't find this to me a major setback, and we believe that the reduced button complexity is more beginner-friendly.  On the other hand, Pentax engineers could have gone to greater lengths to adapt the remainder of the K-S1's interface for novice users rather than just toying with its cosmetics.  For example, an in-camera menu guide (was we've seen on entry-level Nikon models) would have been welcome.  Other settings could also have been simplified, consolidated, or grouped more intuitively.  In addition, a touchscreen and/or native wireless functionality would have made this camera more appealing to the modern tech crowd.  Perhaps we'll see something along those lines in a "K-S2".

The past several generations of Pentax DSLRs have been known for great ergonomics.  Unfortunately, unlike the new interface, the Pentax K-S1's handling is a bit of a let-down.  The reason the K-S1 doesn't shine in this area is that its grip is simply too small to comfortably support an average-sized hand.  While the enlarged grip of the K-50 or K-3 matches the shape of your hand and supports much of the camera's weight on your palm, the K-S1's grip accomplishes neither of these things.

Although the K-S1 is light enough to be used with a wrist strap, the inability to hold it securely isn't reassuring: note the gap below.  In this case, fashion does come at a cost. 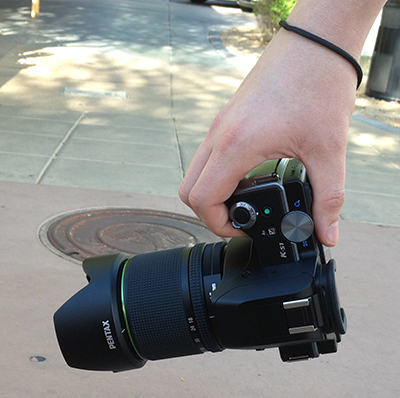 Pentax made one more blooper with the K-S1.  Not only was the AF/MF switch on the left side of the mirror box greatly enlarged, but it was also moved much closer to the edge of the camera. This seemingly-harmless change leaves the switch exposed and makes it very easy to accidentally switch from AF to MF while shooting verticals, simply by resting the camera on the palm of your hand.  We inadvertently put the camera in MF multiple times while out on a shoot— something that's not easily noticed when using a silent-focusing lens. 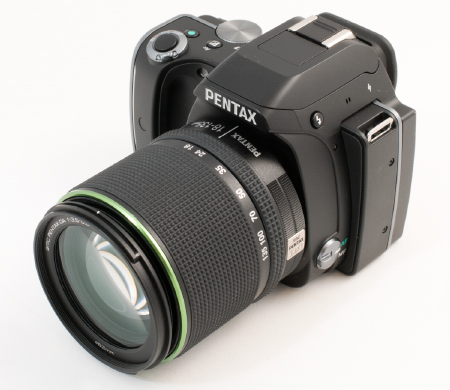 At Photokina, we were told that the K-S1 is targeted at users upgrading from smartphones who would value appearance and build quality.  Ricoh Imaging representatives essentially presented the K-S1 as the iPhone of the camera world.  Indeed, the camera feels solid and well-built.  However, upon closer inspection, a certain level of finesse is missing.  The camera body is made of plastic, and it shows.  Considering that the K-S1 lacks weather sealing, we were at least expecting a partial metal construction given the high price tag ($750 at launch, now $650).

There are of course certain positive aspects that we can't overlook.  The K-S1 has a bright pentaprism viewfinder with 100% frame coverage, something that you won't find in other manufacturers' entry-level lineups.  Also, the mode dial on the back of the camera is cleverly designed and is virtually impossible to turn accidentally.

We do have some positive news to report when it comes to autofocus performance.  The K-S1 incorporates the latest and greatest Pentax AF algorithms in live view mode, similar to those in the Pentax 645Z.  This leads to more predictable focusing as well as slightly improved speed compared to the K-50.

The viewfinder autofocus system is identical to that of the K-50 and the K-30 before it. While it will satisfy casual users, it lags behind the competition in terms of the number of AF points and tracking capabilities.

Manual focusing aides are plentiful; they include include viewfinder AF confirmation, catch-in-focus, live view focus peaking, and live view magnification up to 12x.

Another thing that veteran Pentax DSLR users have come to expect is good image quality.  Pentax engineers have been able to squeeze a lot out of the sensors that they've been employing in their cameras, and we find the K-S1 to be no exception.

The K-S1 delivers very good image quality out of the box: its white balance was true-to-life, the colors were vivid, and metering was accurate when we used it to shoot cityscapes and family photos.  It did a fantastic job of exposing the image below, in which we can also appreciate a wide dynamic range (click for the original file): 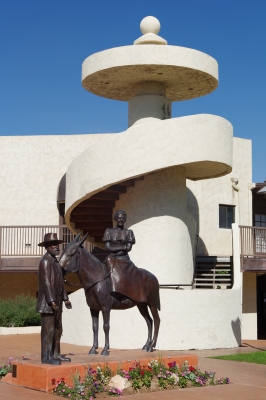 A few more examples follow, all shot in P mode with default JPEG/camera settings and no post-processing of any kind (other than scaling): 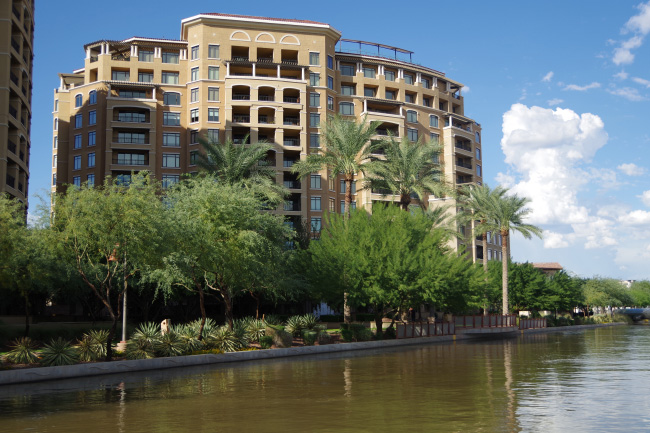 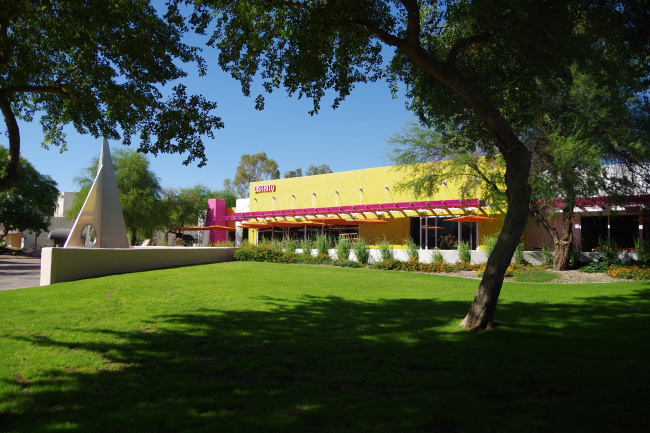 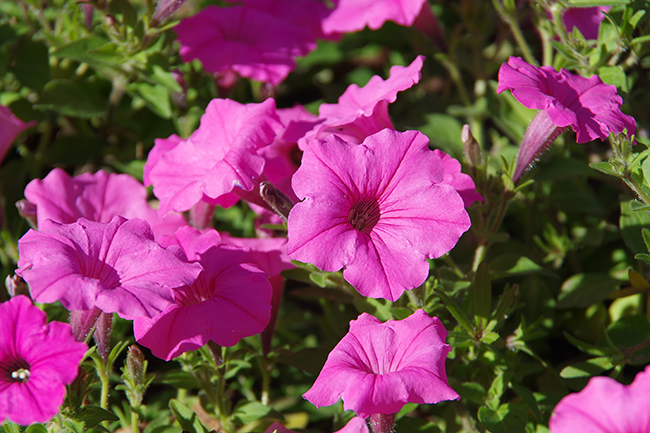 While the K-S1's 20.2-megapixel resolution only represents a 25% bump compared to 16-megapixel sensors, when we combine this with the K-S1's AA-filter-less sensor design, the difference between it at the K-50 can easily be appreciated.  Notice all the detail that's visible in the roof panels in the photo below (shot with the 18-135mm lens): 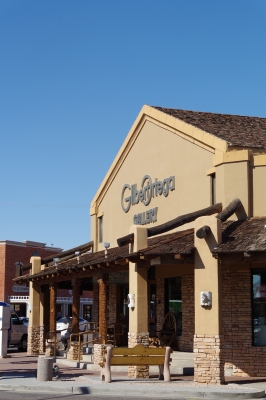 With this increase in resolution, we've also observed an increase in noise, however.  Even at ISO 100, noise is visible in the sky and darker parts of the image.  At this time we cannot make a definitive verdict on noise, but we will of course examine this in more detail in our upcoming in-depth review via comparisons to the K-50, K-5 IIs, and K-3.

If you're a novice and not a pixel-peeper, however, it's safe to say that you will be more than satisfied with the K-S1's image quality.

More advanced users will be happy to know that in addition to shooting JPEGs, the K-S1 can of course also capture 12-bit RAW files (either PEF or DNG).  If you plan on shooting in RAW, we recommend that you choose the DNG format as popular software such as Lightroom does not yet support the PEF files.

Like all Pentax DSLRs, the K-S1 has superb backwards-compatibility and will work with any genuine Pentax K-mount lens ever made, from manual lenses to the latest-generation digital lenses.   Sigma and Tamron are among the third-party manufacturers that offer autofocus lenses for Pentax.  More details can be found in our lens database.

The Pentax K-S1 is a capable DSLR with a fashionable appearance.  In many ways, it has more features than a novice could ever ask for, and it delivers in terms of image quality.  Its new interface is a step in the right direction, though it's a shame that the ergonomics took a hit: while light and compact, the camera's main grip isn't as comfortable as what you would find on traditional Pentax models.

Despite its merits, for many users, the K-S1 will not be the right choice.  At $646 in the US, it's considerably more expensive than the K-50 ($396) to which it is almost identical feature- and performance-wise.  You can get weather-sealed body with considerably better ergonomics if you're willing to sacrifice those fancy colors and flashy looks.  Unless you see your camera as a fashion item, we recommend the K-50 over the K-S1.  Or, if you have a higher budget, spend a few hundred more for the cream of the crop, the K-3.  Ricoh Imaging USA has already dropped the price of the K-S1 by $100 in an attempt to make it more attractive, and we feel that this trend will continue (at least in our market).  Had the K-S1 improved more on some of the K-50's key shortcomings, such as the loud shutter sound or short battery life, it would have been much easier for us to recommend it.

With that said, we genuinely believe that the K-S1 looks good.  In real life, it's considerably more appealing than in product photos.  If you feel that the K-S1 is calling your name, we do recommend that you opt for one of the fancy body colors rather than the black/grey version pictured above.  The black/grey body is the rather boring and almost goes against the concept behind the camera.