A retractable kit lens with silent AF and weather sealing 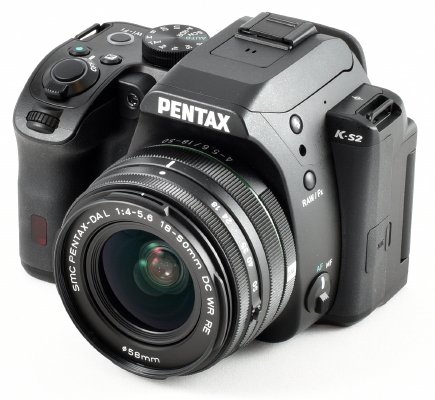 The launch of the Pentax K-S2 was accompanied by a next-generation weather-sealed Pentax kit lens: the SMC Pentax-DA L 18-50mm F4-5.6 DC WR RE.  Thanks this 18-50mm, Pentax users will finally be able to enjoy silent autofocus in a $100 lens— a much overdue offering in our eyes, at least for the sake of users planning to stick with the kit lens, as well as Pentax showrooms.

But adding silent AF isn't the only thing that Pentax did with its new kit lens.  The "RE" in the lens name actually refers to an ultra-compact retractable design that reduces the length of the barrel by more than half when not in use.  Once a special lock button on the zoom ring is depressed, the ring can be moved past 18mm to collapse the lens, and vice-versa (you of course cannot take pictures while the lens is collapsed).  On top of this, the lens weighs just 158 grams, or almost 25% less than the existing SMC Pentax-DA L 18-55mm WR kit lens.  In other areas, the 18-50mm is very similar to the 18-55mm WR: both are weather sealed, have plastic mounts, lack a distance scale, and can deliver pleasing close-ups.

So, on paper, what we have here is a more compact lens with improved technology (silent AF) and reduced weight compared to the 18-55mm kit lens.  You do lose 5mm at the long end, however, in addition to a half stop of light at the wide end.  Apart from this, does the new 18-50mm hold its ground in terms of image quality?  Does it handle well?  We will be investigating these points in this hand-on first impressions review of a production copy of the lens.

Click on any thumbnail for a larger version of the corresponding image.  Full-size samples and RAW files will be released alongside our in-depth review.

Our preliminary finding is that the new 18-50mm delivers optical performance very similar to that of the 18-55mm WR.  This lens is good for casual shooting in a wide variety of scenarios, but if you crave razor-sharp or aberration-free images at the pixel level, there are of course plenty of alternatives to consider.  The very same logic applies to the 18-55mm.

Given the low price of this lens, however, we can't help but be satisfied with it.  If you primarily use your camera for sharing photos online, then this lens is more than adequate and it will be able to serve you well.

The bokeh actually quite pleasing and you'll enjoy a close-up reproduction ratio of nearly 1:4 at 50mm.  Thanks to a 7-blade aperture diaphragm with rounded blades, the 18-50mm's bokeh is more circular compared to the old kit lens which had 6 straight blades.

In the field, we found the 18-50mm to expose accurately with the Pentax K-S2 and K-3.  Its images had plenty of contrast and rarely needed big clarity boosts.

Click on any thumbnail for full-size, out-of-camera JPEGs to compare the two lenses on your own. Distortion, diffraction, vignetting, and aberration corrections were enabled in all these images.

We will be bringing you a variety of other tests in our upcoming in-depth review of the 18-50mm.

A huge benefit of the 18-50mm's retractable design is a more compact size when stowed in addition to a lower overall weight.  Refer to the slider below to compare the two lenses at their longest and shortest lengths: 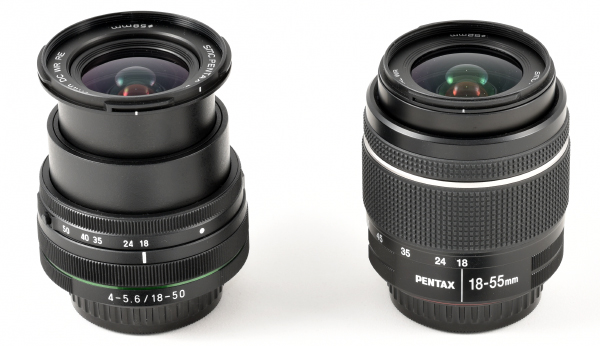 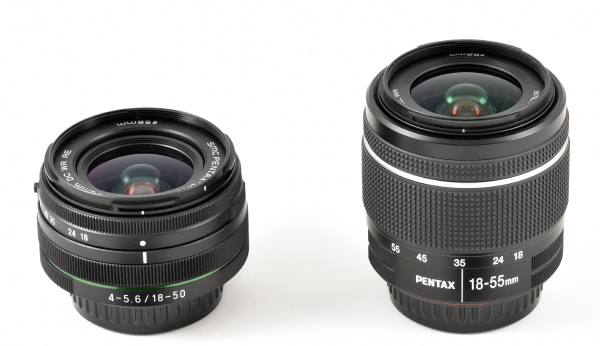 When collapsed the 18-50mm is close to half the length of the 18-55mm (just 41mm), whereas when extended, it stretches just a few millimeters further.

Making everything as small as possible unfortunately carries some inherent drawbacks.  As you can see, the 18-50mm's zoom ring is much narrower than that of the 18-55mm. More force is also required to turn the 18-50mm's zoom ring, and it isn't as well-dampened.  This makes it more challenging to make fine or smooth adjustments.  On the plus side, there is no zoom creep as a result.

Because the 18-50mm employs a more complex two-part barrel design, it also feels bit more wobbly, but overall its build quality is still quite good for a kit lens (despite having a plastic mount and barrel).  Do bear in mind that it is a weather-sealed lens!  The 18-50mm feels more sturdy when mounted on a camera than when extended and held separately.

We recommend always retracting the 18-50mm when storing it to minimize the risk of dust ingress into the weather seals and to avoid accidentally damaging the barrel.

A considerable amount of force is needed to retract and collapse the lens.  This can get mildly annoying at times, but we don't see it as an issue due to the low frequency at which it is done.

When the lens is collapsed, the Pentax K-S2 displays a message stating that it cannot be used and prevents the shutter from being released Without a firmware update, other DSLRs will not do this.  With the lens collapsed, you'll simply see a big blur when looking through the viewfinder. 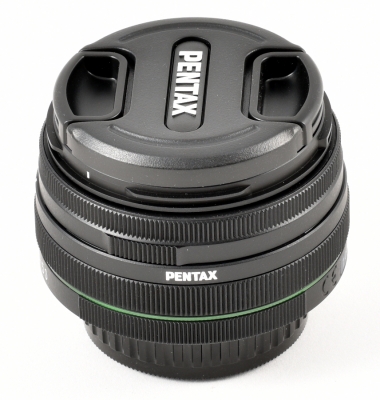 Pentax logo on the side of the lens

A small but welcome Pentax logo has been placed on the side of the lens.  Directly opposite to it (not pictured) is a tiny "DA L" badge that signifies the lens series.  For those unfamiliar with the various Pentax designations, DA L refers to Pentax's affordable kit lens series.  Browse other DA L lenses in our lens database.

The silent AF in the 18-50mm is a very welcome addition.  Thanks to this, the lens's autofocus operation is nearly inaudible compared to the traditional screwdrive.  We cannot stress enough how important of an improvement this is in an entry-level lens.

One interesting side-effect of the 18-50mm's compact design is a motor-actuated manual focusing system.  Rather than being mechanically linked to the lens, the focusing ring sends digital signals to the DC motor, which in turn adjusts the focus.  As a result, the new 18-50mm supports "quick-shift" manual focus overriding, unlike any other DA L lens. There is unfortunately a little bit of latency when focusing, and it is not as easy to make precise adjustments, so we would have preferred the traditional mechanical implementation.

This type of manual focusing system is a first for Pentax K-mount lenses.  It also means that the earliest Pentax DSLRs (*ist D, K100D) cannot be used with this lens, since there would be no power for the DC motor and you won't be able to focus (even manually).  Likewise, manual focusing will be unavailable when your camera is turned off.

See the video below for the 18-50mm's focusing, retraction, and zooming in action.

Pentax has also launched a more expensive version of the 18-50mm kit lens called the HD Pentax-DA 18-50mm F4-5.6 DC WR RE.  With the exception of improved glass coatings, this variant is optically and mechanically identical to the DA L version that we've been discussing.  The HD version does include a lens hood that must otherwise be purchased separately. 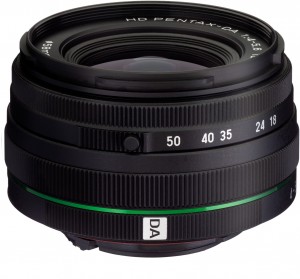 While we are still in the process of testing the HD DA 18-50mm more closely, we aren't inclined to recommend it since its higher retail price of $296 / £229 makes it a much worse value.  Most users would be better off either sticking with the DA L version and spending the extra cash on primes such as the DA 35mm or DA 50mm, or simply upgrading to a more "permanent" everyday zoom lens such as the DA 18-135mm.

We are thrilled to see that Pentax's kit lens has finally seen an update.  The new SMC Pentax-DA L 18-50mm F4-5.6 DC WR RE brings much-needed silent autofocus to the Pentax entry-level lens lineup.  The lens is also industry-leading with its weather sealing and ultra-compact design.  Its image quality is good and it really offers quite a lot for just $100; you will not find a sealed lens for this cheap from Canon or Nikon.

However, due to the somewhat quirky "focus by wire" manual focusing system and a less comfortable zoom ring, the 18-50mm isn't a slam-dunk product.  While we would still opt for the new 18-50mm over the old 18-55mm for its autofocus alone, we would also welcome an updated version of the 18-55mm with silent AF and no other modifications.

If you'd like to get your hands on this lens, you can either order the HD version separately (for $296) or pick it up in a Pentax K-S2 kit (for $100 more than the body only).  The DA L 18-50mm is currently not being paired with any other body. 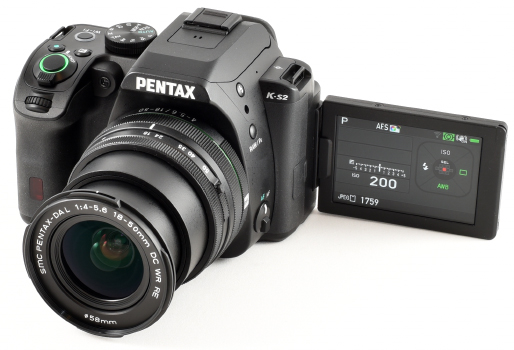