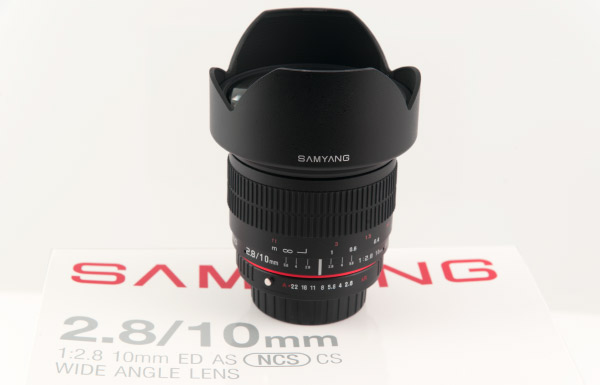 Back in April, the Samyang 10mm F2.8 ED AS NCS CS ultra-wide lens finally made its debut in the Pentax mount, and we're currently in the process of testing it for an upcoming in-depth review.

Thus far, our impressions of this lens have been very positive.  With a field of view of roughly 100 degrees horizontally and 109.5 degrees diagonally, the 10mm is the widest rectilinear (non-fisheye) prime currently available for Pentax DSLR cameras.  This makes it particularly-effective for specialty applications such as photographing real estate, car interiors, or panoramas.  In the hands of skilled users, it can also be used for cool close-ups and other artistic imagery.

At the wide end of the focal length spectrum, every millimeter makes a big difference when it comes to field of view.  The photo below illustrates how much more the 10mm can see than a 12mm lens, let alone the 18mm focal length that's become standard for kit lenses.  The difference between 10mm and 12mm is just over 10 degrees! 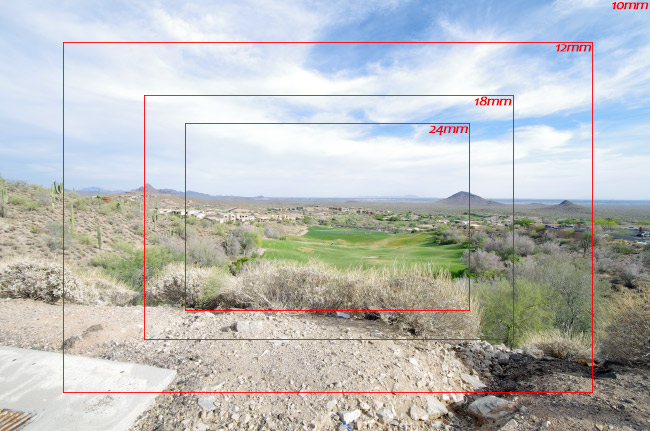 10mm field of view vs. other wide-angle focal lengths.

Samyang produces this lens in a variety of other mounts, including Canon EOS, Canon M, Nikon F, Sony A, Sony E, Fujifilm X, Samsung NX, and Micro Four-Thirds.  Depending on the market, you may also find it re-badged under other brand names, such as Rokinon, Bower, or Vivitar.  In the US, the lens retails for $529, making it one of Samyang's most expensive lenses.  Still, this 10mm is cheaper than most competing ultra-wide primes with autofocus.  Also, contrary to popular belief, this is not a fully-manual lens: it supports exposure automation (i.e. the 4 basic shooting modes) while only requiring the user to focus manually.  In Pentax terms, this means that the lens has an "A" setting on its aperture ring, just like Pentax A-series lenses. Read on for some of our preliminary findings about its performance.

Thanks to a massive depth of field, you rarely need to worry about focusing with the 10mm while out in the field, which makes the lack of autofocus a non-issue.  Even wide-open, everything that's more than one meter away from you can appear in focus.  Stop down to F5.6 and your hyperfocal distance decreases to just over a foot! 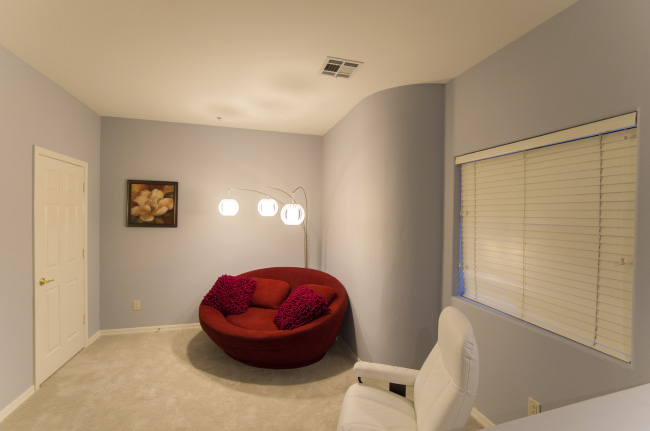 So, apart from the fact that it sees almost everything around you, what else about the 10mm really stood out to us?  We took a several landscape shots with it and the K-5 IIs and found the lens to deliver plenty of contrast and accurate colors out-of-camera.  It's also sharper at 100% than we had expected.  Click on the panorama below for the original resolution (we only cropped off the top and bottom of the image to enhance the composition).

While the details in the corners and near the edges do get distorted, the majority of the frame is crisp, and that's exactly what we're looking for in a premium ultra-wide lens.  This will save you a lot of time if you're used to stitching multiple landscape photos, and if were to re-shoot this image with a K-3, we'd likely be able to pull off some rather large prints without having to spend hours in post.  Still, for a single 16-megapixel image, what you see above is already remarkably good, which is a testament to the 10mm's sharpness.

Another highlight of this lens is its nano crystal glass coating (branded as the "Nano crystal anti-reflection Coating System", or NCS).  After pointing it directly at the sun, there's nothing to suggest that Samyang's latest coating is any worse than comparable premium coatings such as Pentax's HD Coating or Nikon's Nano Crystal Coat.  Ghosting is almost invisible, and the flare that you see enhances the image, if anything. 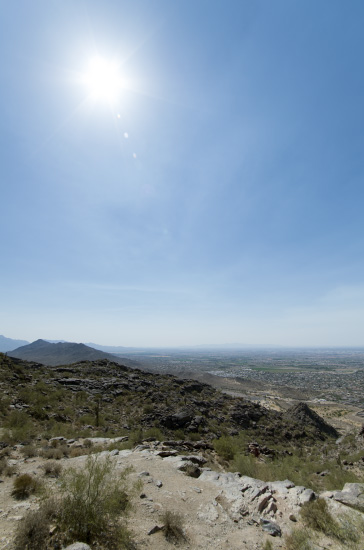 While many things about this lens have impressed us, it certainly isn't devoid of flaws.  The optical designs needed to achieve a 10mm focal length on a DSLR are complex and certainly not free from aberrations.  The 10mm has prominent barrel distortion, which causes soft edges and blurry corners.  This can of course be corrected, but only at the expense of several degrees of the frame.

In addition, the lens doesn't do a stellar job wide-open.  According to our test charts it is theoretically quite sharp, but the fact that most of the objects in your frame will be small makes even the smallest loss of sharpness manifest itself rather prominently.  This means that you'll really want to stop-down to at least F4 and preferably F5.6 for good detail in the distance, and for the best contrast.

Finally, it is somewhat challenging to fine-tune the focus while composing through the viewfinder with this lens, as it's tough to judge the overall sharpness of the image based on small, distant objects.  Relying on hyperfocal distance will almost always get the job done, but there are times where you want to make sure you've nailed the focus, especially when shooting close-ups, or simply when you want the best possible sharpness for prints.  Live view magnification is therefore a life-saver. 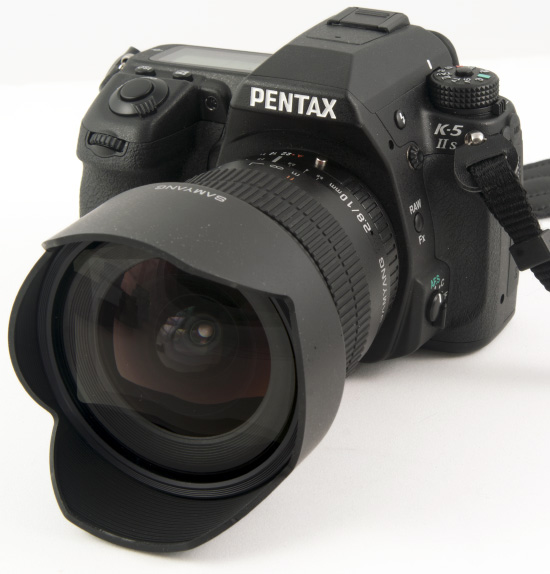 All in all, Samyang's latest prime lens is not to be overlooked. Thanks to this new 10mm, there's now an affordable way to get your hands on a quality rectilinear lens that's among the widest in existence for any DSLR camera, which is undoubtedly great news for APS-C shooters.  This lens gives you a field of view that's 17.5 degrees wider than the widest Pentax prime (the DA 14mm F2.8) and 10.5 degrees wider than the widest Pentax zoom (the DA 12-24mm F4) while still delivering impressive image quality. Similar comparisons can be made for other brands.

Stay tuned for our full in-depth review of the Samyang 10mm F2.8 in the coming weeks.  If you pick up your own copy before then, be sure to leave a review in the lens database.