Over the past few years, I used my SLR less and less and progressively used ever cheaper and more limited point and shoot digital cameras.  My quest to find something better ended with the unexpected but very rewarding acquisition of a Pentax K-5.  With that came two problems, lens buying addiction (LBA) and finding the time to shoot.  The LBA was satisfied, at least temporarily, with a few cheap Takumars.  But I only managed to find a few minutes here and there to shoot, usually somewhere in the neighborhood and this quickly became a frustration.  With the arrival of spring, inspiration came from Nature and this lead to an interest in macro, but I quickly found out that unless the sun was shining bright, I needed to find another source of light. 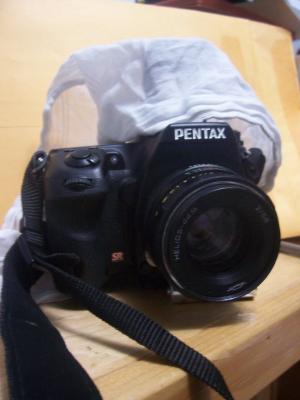 The problem with the onboard flash is that it is harsh.  When shooting with my 55 mm, I’d have to stop down to f16, and even then I ran the risk of blowing out part of the image.  A simple and cheap solution came in the form of a handkerchief in order to diffuse the light.  As simple as this “piece of equipment” might seem, it gave me the option to shoot more often, in situations where I could not otherwise capture the shot and I usually had one to hand.  The meant I could try some creative experiments and taught me a fair bit about metering, apertures, and the effects of direct and diffuse light sources.   It also meant I could find more opportunities to take photos, something my family will say I obsessed with after getting the Pentax K-5.

I have to admit that I once cheated on my faithful handkerchief in a moment of need.   With my kids being cute indoors I wanted to use the flash without blinding them.   So to my rescue I grabbed a CLEAN pair of boy’s underwear to drape over the flash.   It worked even better than the handkerchief, as not only did it diffuse the flash, but I could look through one of the leg holes to use live view at the same time.   I just don’t see this working in public though.  With luck my handkerchief will find out of this indiscretion and go hiding in a moment of jealousy and instead will remain a valuable aid in my photography toolbox.