The question of “what piece of photographic equipment has had the greatest positive impact on my photography” can’t be answered without determining where I’m at now and where I’ve come from.  Like many people, I’ve dabbled in photography off and on most of my life, but never really “invested” in it.  I used mostly cheap 110 cameras and 35mm cameras growing up, and then had several point-and-shoot digital cameras once they were introduced.   I’ve always been fascinated with light, from a scientific and artistic perspective, and I knew that I would need to acquire more flexible and higher quality equipment if I wanted to better use light and improve at photography.   Naturally, a DSLR was in order.  Initially (with “guidance” from friends and family) I purchased a Canon Rebel XTi.  Not a bad camera, but limited on lens selection – rather, my budget limited the number and quality of lenses that I could acquire in the Canon system.  At that time, a friend of mine began preaching the merits of Pentax to me, so I made the switch to the Pentax “lens system”, and acquired a Pentax K10D.  I was now free to explore the wonderful world of legacy lenses, specifically third-party manual focus lenses.  This leads me to the subject of my post, the Auto Sears MC 50mm f1.7 lens. 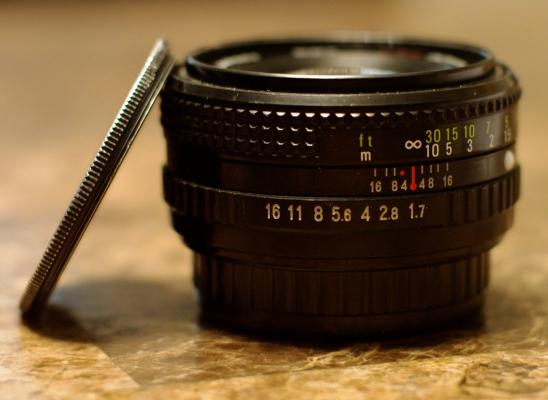 The Auto Sears MC 50mm f1.7 lens is a manual lens in all respects, with six aperture blades.  The aperture must be controlled on the lens body, and not by the camera.  The lens is clean in design and unassuming to look at.  Nothing flashy, it just gets the job done.  I’ve seen multiple variations of this lens, as far as materials and size/profile, but generally they all seem to be well built with smooth operation.  Some speculate that they may have been manufactured by Ricoh, but that really isn’t important for this discussion.  My version has a plastic body with a metal mount and is very low profile.  I have three other 50mm lenses, and this one is considerably shorter and lighter than the others.  Due to its construction, weight, and size, it makes a great “walk around” lens. 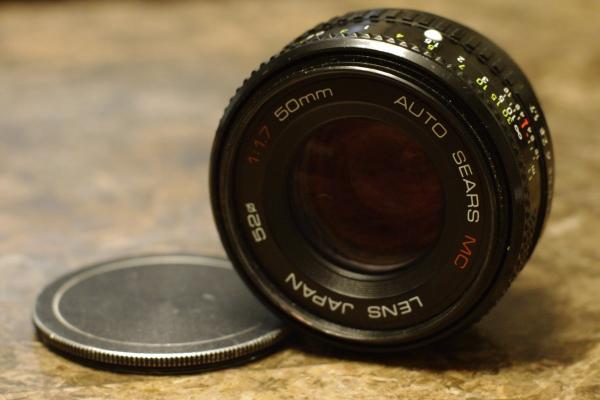 What is so special about this lens?

There are several reasons that this lens is the piece of photographic equipment that has had the greatest positive impact on my photography.  I’ll focus on the two most important.  For starters, it was not only one of my first manual focus lenses, but it was my first “M” lens.  Thus, it took some adjustment on my part to use it.  This may seem like too much trouble to some people, considering how many good autofocus lenses are out there, but I see it as a huge benefit.  In my opinion, there’s no better way to learn how to fully use and manipulate your camera than to start with an “M” lens.  In order to force myself to figure it out, I would put this lens on my camera, and then leave the rest of my bag at the house and go out and shoot.  Not only did this force me to learn about all of the functions of my camera, but it removed all possibility of putting something “easier” on instead.  What started off as difficult and cumbersome soon became second nature and enjoyable.  In most cases, I now prefer to shoot with manual lenses, “A” or “M”, and have sold or traded all but 2 of my auto focus lenses in favor of “vintage” glass.

The second major influence that this Sears 50mm lens has had on my photography is that it gave me a “bar” or “standard” that I could measure other lenses against.  This may sound funny given what it is, but hear me out.   I purchased this lens for $8 about five years ago.  That amount would barely buy a good meal these days.  But that $8 bought me a fantastic photographic tool.  It’s sharp, even wide open, and produces nice bokeh.  It feels good in the hand, and has a smooth focus mechanism.  It is reliable and well built, and the results are pretty darn good.  Arguably not as good as the Pentax 50mm lenses, but who can complain for the price.

Whenever I buy a new lens – if I don’t enjoy using it , or if the results I get from it don’t compare with my Sears 50mm, then it probably won’t stay in my bag for long.  As for significantly more expensive lens that don't compare favorably, they're probably gone that much quicker.  (If it can’t hang with the $8 lens, then what good is it)?  I have “kicked out” a couple of lenses (because of the standard that my Sears 50mm has set) that would probably get me laughed at in certain circles – but that’s just how I do it.  For me, it’s as much about the equipment used and the process of taking the photo as it is about the result.

Below my post are a few shots that I took with the lens.  I believe that these illustrate the depth of field, bokeh, sharpness, and colors that this lens is capable of producing.

I know that there are “better” 50mm lenses out there, but I don’t know how many of them provide the bang-for-the-buck that this one does.  It’s pleasant to use, light but well built, and produces great results.  It’s sharp, even wide open, and has great color rendition, contrast, and bokeh.  Some argue that it isn’t as good as the Pentax lenses, but I prefer to look at it as different – not inferior.  Congratulations if you already have a good 50mm lens that you enjoy using.  If you don’t, then let me recommend grabbing one of these.  It won’t set you back much, and who knows – it might just be a huge influence on your photography going forward.

External Flash on a Point and Shoot