My dad was hooked on Kodachrome since, well, the beginning of time I think. Ektachrome became his mainstay for a while, and then there were experiments with Agfa and Seattle film works. He loved taking pictures, but I never was entranced with photography myself. I remember in the 70s when I was a kid, my dad painstakingly sliced open dozens (maybe hundreds) of glass mounted slides and remounted them in cardboard so they would work with his new auto feed projector. Family gatherings, parties with the neighbors, trips, our days out on the boat - all captured and later plastered up on a screen at home for friends and family.

Somewhere along the way, slides became passé, the mechanism on his last projector became cranky, and he moved on to prints. The slides were stored away in a closet, undisplayable and forgotten. Plastic covered pages in sticky paged photo albums ruled the day. After he passed away, I wondered what family history was locked away in those slides. I researched scanners off and on, and my mom agreed to help label pictures if I could scan them. I finally bought a Nikon Super COOLSCAN 5000 ED, and plunged into a project. The earliest slides were from 1941. The first one I scanned was my grandmother, her sister and a cousin sitting on a dock, and I realized what a treasure I had just unlocked. The next few were my dad, still a kid, with my aunt (now seen as a pretty teenage girl) on the beach with my grand parents. Then this picture hooked me, a fire truck from what is probably a July 4th parade in 1941: 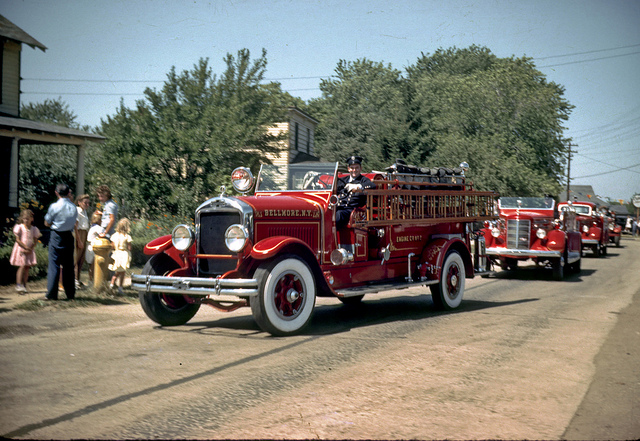 The children, the houses, the fire trucks and the grinning fireman driving entranced me, transported me back to that summer of long ago. I spent hours playing with the Nikon Scan software, trying to get the right balance of skin tones, reds, shadows and sky. I'll probably still go back and do it some more, forever trying to perfect that reflection of the past and bring it to life. I spent hours experimenting with the Nikon scanner on other slides too, varying exposures and resolution, trying different combinations of the color recovery and enhancement options. Several scans of a beach photo proved that past 10M all I added was grain. At 10M I could read a tiny sign on the snack stand in the background and see "Tobay" - and now I knew where he was.

I scanned some 6,000 slides of dad's, and had many smiles along the way at the images. Some people long gone, some kids who now were parents themselves. Me in a stroller. History was uncorked. 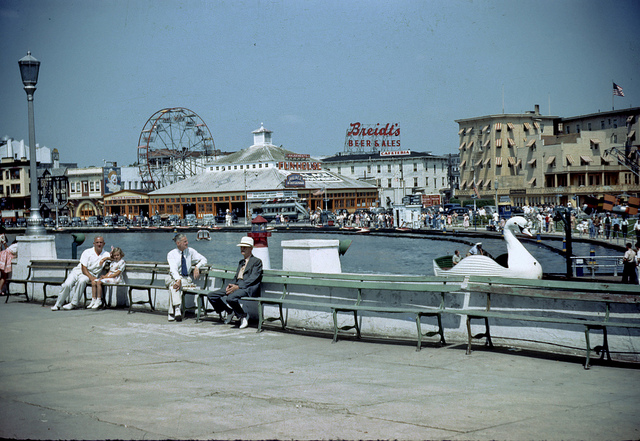 Asbury Park, 1941 In the course of all this fiddling and rediscovery of history I became hooked on photography. I also figured if the Kodachrome slide was about 10M pixels then that was all I'd need in a camera, which led to my first DSLR, a Pentax K200D. I have so enjoyed taking and sharing pictures the past couple years, and that Nikon slide scanner was what unlocked me. My son just graduated high school, and we gave him a Nikon 3100 DSLR. Last week he took 700+ photos. Maybe he's got some of his grandpa's photography genes too.

Why I love the Pentax K5